The electric-vehicle (EV) specialist and the world's two largest lithium producers largely have China to thank for the strong week their stocks have been having. 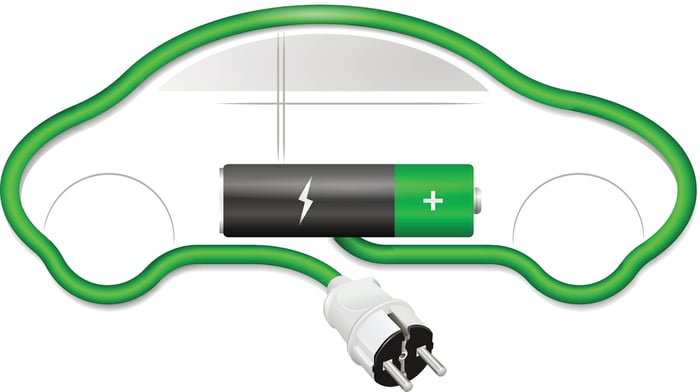 Soon before the U.S. stock market opened on Monday, news came out that a Chinese government official said over the weekend that China had started exploring banning the production of petroleum-fueled cars. Xin Guobin, vice minister of the Ministry of Industry and Information Technology, didn't say when the country would implement the ban, but said the ministry along with relevant departments will be developing a timeline, according to Reuters.

Such a ban seems as close to a sure thing as it can get, based upon my read of the reporting on this topic, which isn't much of a surprise as China's economic growth is surely suffering due to the country's horrendous air pollution issue. So the only question seems to be "when?"

China is the world's largest auto market, with the United States and Europe following quite a bit behind at Nos. 2 and 3, respectively. Moreover, China's auto market has been growing so much faster than the world's other markets that it promises to put even more distance between it and the other big markets. In 2016, China accounted for approximately three-fourths of the volume growth in global auto sales, according to IHS Markit.

Tesla and lithium giants SQM and Albemarle are poised to benefit

Given the massive size and fast-growing nature of China's auto market, a ban by the country on producing gasoline and diesel-fueled cars would obviously be a huge positive for the electric vehicle space. This space includes Tesla and other makers of EVs, producers of lithium, -- the metal is needed to make the lithium-ion batteries that are used in EVs -- among others. Select EV stocks are already having a great year, as shown below. 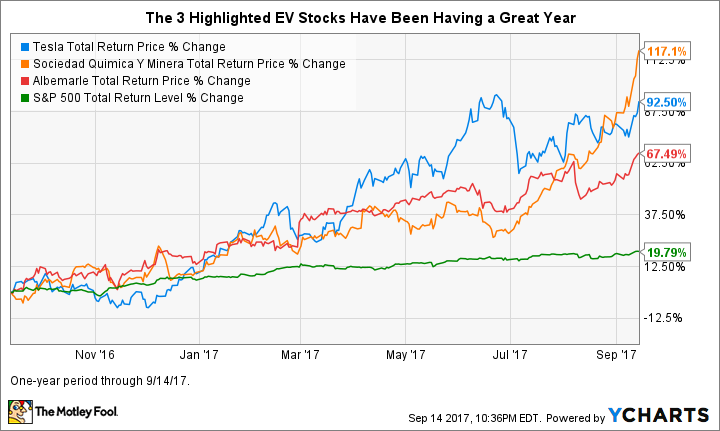 The EV revolution is "driving" the stock performances of Tesla, SQM, and Albemarle. Data by YCharts.

Tesla isn't a pure play on EVs -- it also has an energy business -- but EVs are its bread and butter. In Q2, Tesla derived 82% of its revenue from its auto segment. A ban of the type China is exploring has the potential to benefit Tesla more than the major automakers, which are primarily selling petroleum-fueled cars and just in the early stages of releasing fully electric vehicles.

The bulk of Tesla stock's surge this week can be attributed to the news coming out of China, in my opinion. However, it seems likely that at least a portion of Thursday's 3.1% rise was due to CEO Elon Musk's tweet on Wednesday evening announcing that the company will unveil its electric semi truck on Oct. 26. The unveil -- originally scheduled for September -- is old news that first came out in the spring, with the tentative date being the only new information.

Global lithium market share estimates vary by source, but it seems safe to say that U.S.-based Albemarle is the No. 1 producer, with Chile-based SQM nipping at its heels. (Along with FMC Corp., I called them the best lithium stock to buy last October.) The much-in-demand metal is a significant part of each company's business. In Q2, Albemarle's lithium business accounted for 33% of its revenue and a whopping 60% of its adjusted EBITDA (earnings before interest, taxes, depreciation, and amortization). For the same quarter, SQM's lithium business accounted for 30% of its total revenue. SQM doesn't provide quarterly segment gross profit numbers, but we know that its lithium business accounted for 61% of the company's total gross profit in the first half of 2017.

Putting the pedal to the metal on the EV revolution

The EV revolution is unstoppable and picking up steam. A China ban on the production of petroleum-fueled cars would accelerate the revolution. Investors have several ways they can play this massive disruption of the auto industry, including investing in EV makers, like Tesla, and lithium producers, such as Albemarle and SQM.