Per a pre-publication note in DigiTimes (subscription required), mobile-chip maker MediaTek, largely seen as the No. 2 merchant mobile chip vendor next to market leader Qualcomm (NASDAQ:QCOM), "is unlikely to roll out mobile chips built using more advanced 10nm and 7nm process technologies in 2018." 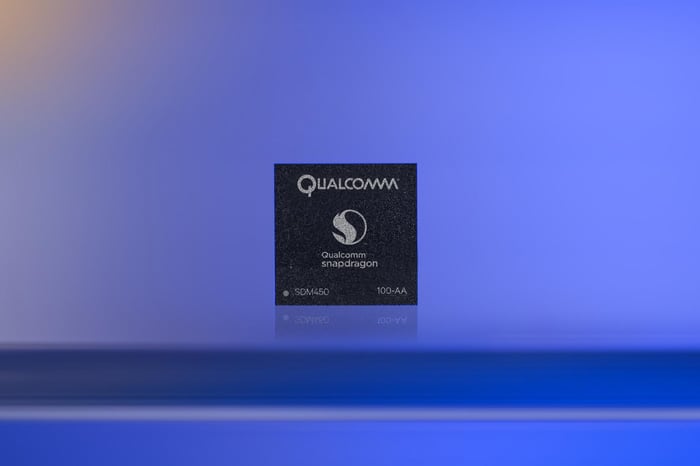 This is, in my view, absolutely the right move for MediaTek. Allow me to explain why and to go over what implications this could have, if any, on Qualcomm.

The right move for MediaTek

These high-end applications processors tend to be packed with a lot of features such as higher-end CPUs, graphics processors, image processors, media engines, and cellular connectivity.

Qualcomm's strength has traditionally been that it has leadership technologies across all these relevant technology vectors, something that competitors such as MediaTek simply have a hard time trying to match. The problem for companies like MediaTek that can't quite match Qualcomm's technical prowess is that the high-end smartphone market is a crowded one, and there's little room for phones that can't quite make the cut in terms of performance or features. So to stay competitive, those smartphone vendors simply must adopt Qualcomm's high-end chips, lest they appear uncompetitive in the marketplace.

Viewed from this lens, it's totally clear why MediaTek's last attempt at an ultra-high-end mobile chip -- the Helio X30 -- just didn't gain traction in the market.

The situation isn't quite the same in the low-end and mid-range portions of the market, where some consumers are fine trading off features and capabilities to get slightly cheaper devices.

Qualcomm plays in those segments, too -- and, to be clear, it plays aggressively here and commands substantial market share there, to boot -- but unlike in the premium part of the market, MediaTek can stand a fighting chance here, particularly as it can try to deliver "good enough" solutions at lower prices, at the expense of selling prices and margins.

This is hardly a path to glamorous headlines in the tech press or riches -- even Qualcomm's chip business, which practically owns the premium portion of the merchant mobile chip market and still doesn't generate particularly impressive profits -- but MediaTek can certainly cut its operating expenses and boost its overall operating margin by ending high-end chip and platform development projects that have very little chance of delivering a positive future return on investment.

Why MediaTek Is Smart to Get Out of Qualcomm, Inc.'s Way @themotleyfool #stocks $QCOM Next Article
Current