Refining giant Phillips 66 (NYSE:PSX) has been on a mission to help its master limited partnership, Phillips 66 Partners (NYSE:PSXP), increase its earnings and cash flow so it can deliver 30% compound annual growth in shareholder distributions through 2018. So far it has been right on the money, achieving a 33% compound annual growth rate by completing a series of dropdown acquisitions and other transactions. The companies now appear poised to finish that task by completing their biggest deal to date, which gives income-focused investors the opportunity to collect an ultra-safe current yield of 5.1% that has a high probability of expanding rapidly over the next year.

Phillips 66 has agreed to sell its 25% stake in the Bakken Pipeline and a 100% interest in Merey Sweeney to Phillips 66 Partners for $2.4 billion. The MLP expects these two assets to generate $270 million of adjusted earnings before interest, taxes, depreciation, and amortization (EBITDA) in 2018. That projection pushes Phillips 66 Partners closer to its aim of generating an annual run rate of $1.1 billion in adjusted EBITDA by the end of next year, which is the level it needs to deliver its promised distribution growth. Given that the company's annualized run rate was $680 million last quarter, it's now within striking distance of that target. 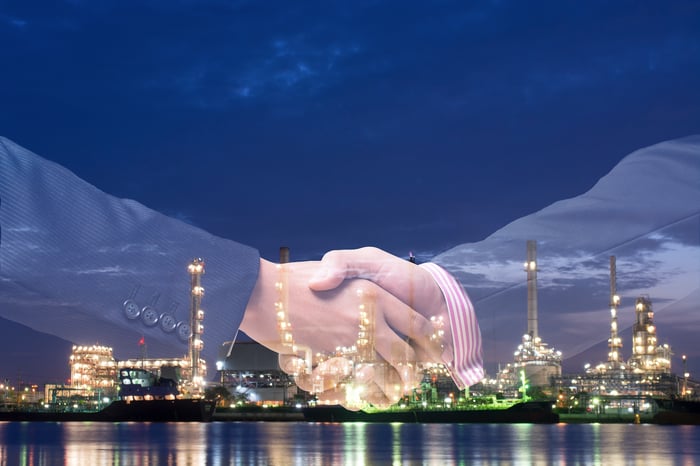 The headliner of this deal is the stake in the Bakken Pipeline, which consists of the controversial Dakota Access Pipeline and the related Energy Transfer Crude Oil Company. Those contentions led to intense opposition to the project, causing problems for developer Energy Transfer Partners (NYSE: ETP) and ended up delaying the in-service date of the 520,000-barrel-per-day oil pipeline by several months. Furthermore, while the pipeline finally started commercial service this June, Energy Transfer's legal troubles haven't ended because a judge ordered a new environmental review that could cause a future shutdown of the pipeline. While that's a remote risk, it's something investors shouldn't completely dismiss.

Meanwhile, Merey Sweeny owns the fuel-grade coke processing units at Phillips 66's Sweeny Refinery in Texas. These facilities process the residue from heavy sour oil into liquid products and fuel-grade petroleum coke that can be used in utility boilers and cement kilns. As part of this deal, Phillips 66 entered a 15-year contract with Phillips 66 Partners for the capacity of this system. 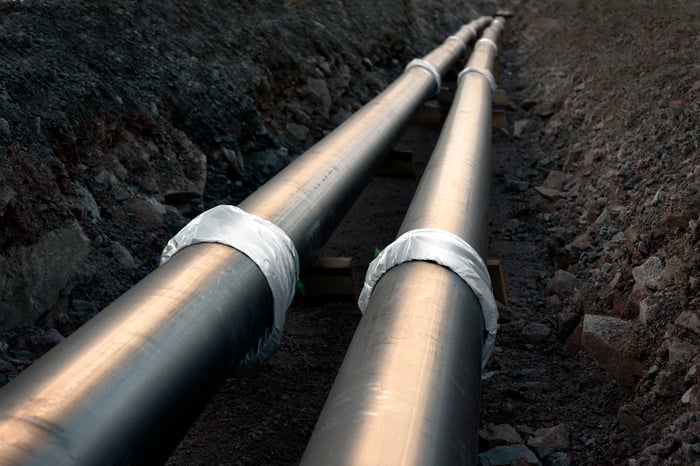 What's still coming down the pipelines?

While this transaction puts Phillips 66 Partners close to its EBITDA goal, it's not quite there yet. However, it has clear line of sight to get there without making any additional acquisitions. That's because it has three expansion projects underway that should enter service over the next year and provide the incremental income needed to hit the target.

First up, the company is a one-third partner on the Sand Hills NGL Pipeline with DCP Midstream (NYSE:DCP), which is currently getting expanding from 280,000 barrels per day to 365,000. The roughly $100 million project should enter service later this year. In addition, DCP Midstream recently announced plans to expand that pipeline up to 450,000 barrels per day at the cost of more than $400 million. That project should enter service by the third quarter of next year. DCP Midstream estimates that it could expand the line to more than 550,000 barrels per day in the future, though that next phase wouldn't enter service until 2019 at the earliest. That said, at an estimated cost of up to $600 million for DCP's two-thirds share, it's large enough to move the needle for both companies, and could give Phillips 66 Partners the fuel to continue increasing its distribution by a rapid rate beyond 2018.

Another of Phillips 66 Partners' expansion projects is the Bayou Bridge Pipeline extension that it's building with Energy Transfer Partners. Phillips 66 Partners owns a 40% stake in the project, which should enter service in the first quarter of next year. Finally, the company signed a joint venture with Plains All American Pipeline (NASDAQ:PAA) last year to operate and expand an oil pipeline in the STACK play of Oklahoma. It initially paid Plains All American Pipeline $50 million for a 50% stake in the joint venture. However, the partners are investing additional capital to expand the 100,000-barrel-a-day pipeline by 150,000 barrels per day, which should be in service by the end of this year.

Phillips 66 Partners isn't a typical high-yield investment because it also offers investors fast-paced growth. Also, the visibility into next year's growth became even clearer this week after it locked up a major acquisition that pushes it closer to its earnings target. Add in the expansion projects coming down the pipeline and it's increasingly likely that the MLP will hit the mark. In the meantime, with the growth potential of Sand Hills and a major expansion project at one of Phillips 66's refineries under development, it's looking like Phillips 66 Partners can continue to increase its payout by a rapid rate well after 2018.