Century Aluminum Company (NASDAQ:CENX) stock fell over 15% last month. September actually started off on a decent note, however, with the company holding on to most of the over-45% gain it made after it reported solid second-quarter earnings in early August. But that clearly didn't last, as the stock dropped precipitously in the final days of September.

The big gain in August was driven by the company's Aug. 2 earnings release. The top and bottom lines both improved year over year and sequentially compared to the first quarter, partially driven by higher aluminum prices (remember this fact). Furthermore, Century Aluminum noted that it was able to achieve solid results despite higher input costs. And while it provided a cautious outlook for the global supply of aluminum, management highlighted that demand for its products remained robust. 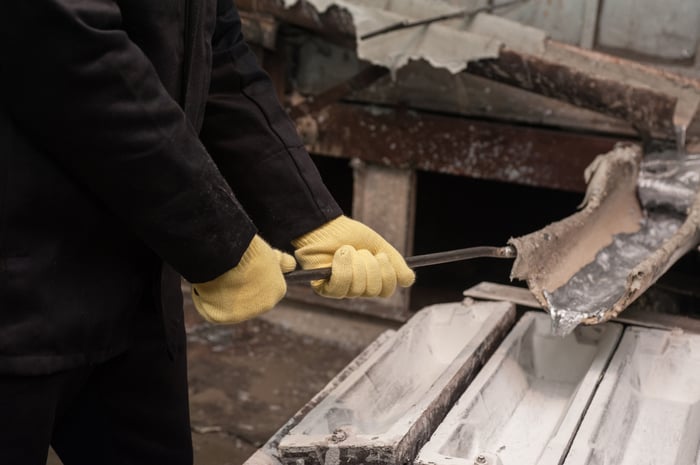 As September got underway, Century's shares managed to keep their gains, trading in line with industry giant Alcoa through the first part of the month. But then aluminum prices started to plunge over the last 10 days or so of September. That's a problem for Century, a producer of primary aluminum, which pretty much leaves it reliant on commodity prices. With the price of the commodity it sells falling, the shares traded lower. The math is pretty simple: Lower aluminum prices will likely mean weaker results in the future for Century Aluminum.

Investors reacted accordingly, noting that Century has been bleeding red ink for several years. The second quarter was, for reference, the first quarter in more than two years that Century had turned a GAAP profit.

The second quarter was a good one for Century. The drop in aluminum prices in September, however, was a quick reminder that Century is a commodity producer and its results will wax and wane with the price of the metal it makes. Although the stock is still materially higher than where it was prior to reporting earnings, investors clearly shouldn't forget the impact that often-volatile commodity prices can have here.