Please ensure Javascript is enabled for purposes of website accessibility
Log In Help Join The Motley Fool
Free Article Join Over 1 Million Premium Members And Get More In-Depth Stock Guidance and Research
By Eric Volkman - Oct 4, 2017 at 8:32AM

Visa's recent performance has been stellar, but its stock is expensive.

It's a fine time to be Visa (V 0.73%). As the top credit card processor in a world rapidly moving away from cash to alternatives like plastic, the company is posting strong growth in all the right areas.

The market has noticed this success, however. Like perennial rival Mastercard (MA 1.60%), the company's shares are up by over 34% on the year, nearly triple the growth of the S&P 500 -- which includes Visa and Mastercard as components, by the way. This has pushed Visa stock's key valuations up; the trailing 12-month P/E now stands at 39. Are the shares worth buying at such a high level?

Analysts have been projecting growth for Visa for some time now, but not this much growth. The company's Q3 saw it blow past estimates for both revenue and adjusted net profit, growing both by 26% on a year-over-year basis. These line items came in at $4.57 billion and $2.06 billion, respectively. 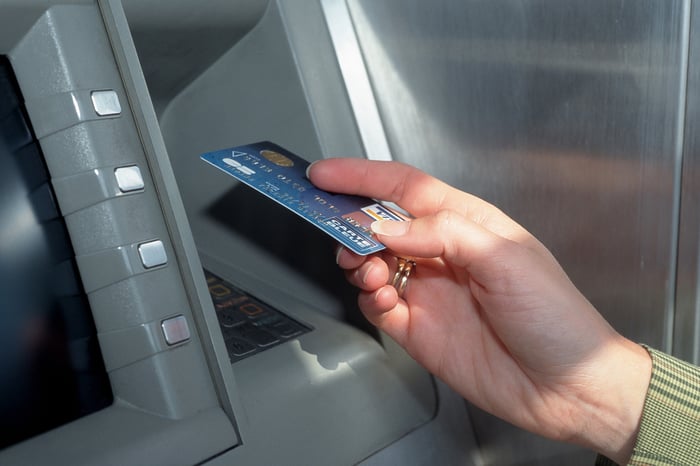 No payment card company approaches Visa's power, reach, and potential. As of the end of 2016, there were roughly 335 million Visa cards in circulation, according to WalletHub. This dwarfed the 200 million of Mastercard, and well exceeded the 47.5 million of American Express (AXP -2.12%)although since AmEx issues its own cards, in contrast to both Visa and Mastercard, its numbers will always be lower.

Meanwhile, Visa has its own efforts going in the digital-payments space, particularly with Visa Checkout. And it's done a good job partnering with, and even investing in, nominal rivals such as PayPal Holdings and Square. So even if Visa doesn't end up with a commanding lead on the alt-payment scene, it'll still be deeply involved regardless -- and profit accordingly.

Growth is in the cards

Now that Visa Europe has been fully consolidated into its operations, Visa should be able to extend its global lead over the rest of the pack. The company's guidance is rosy; it's expecting revenue and adjusted earnings to rise by roughly 20% on a year-over-year basis for the entirety of fiscal 2017.

Zooming out a bit, analysts tracking Visa stock collectively expect the company will post earnings growth averaging 16% annually over the next five years.

So yes, a stock that trades at 39 times trailing earnings isn't Bargain City; also, some of Visa's recent moves are questionable. But such a cost is more than worth it, even if the company falls short of its projected growth rate. Given the company's strong performance lately and the potential in front of it, though, this perennial over-performer should at the very least match expectations. Visa's stock is still very much a buy.