The market capitalization of a great many companies on the stock exchange doesn't total $7 billion. That's a large pile of money. Yet it was that net amount (to be technical, it was $7.06 billion) that credit card giant Visa (NYSE:V) ultimately spent on share buybacks in 2016.

I'm not generally a fan of buybacks, although I accept that at times they can be useful for companies and beneficial for shareholders. But Visa's spend is simply excessive.

Sharing the wealth, and then some

A huge share-repurchase tab is not unusual in the credit card sphere. Visa's rivals MasterCard (NYSE:MA), American Express (NYSE:AXP), and Discover Financial Services are also active buyers of their own stock.

But not at Visa's level. Among its peers, the company is the buyback champion in terms of both total outlay and how much of its free cash flow is spent on the activity. That $7.06 billion exceeded free cash flow by over $2 billion. In 2016 all of Visa's peers kept their spending under FCF:

This heavy spending is becoming a habit for Visa. In its most recently reported quarter, the company refreshed the 2016 buyback program at the same level it was before, authorizing up to $5 billion in new share repurchases. So the 2017 outlay will very possibly come in higher than its predecessor. That's saying something, as last year was the first time the company topped the $7 billion mark.

If an enterprise devotes so much of its cash flow to stock buybacks, it has little left for that other beloved shareholder distribution, the dividend. Visa's spending on said payout was downright miserly by comparison last year, at $1.35 billion. We can also wag a finger at MasterCard ($837 million), AmEx ($1.2 billion), and Discover ($514 million) for the same. However, at least the latter two companies have yields above 1%. 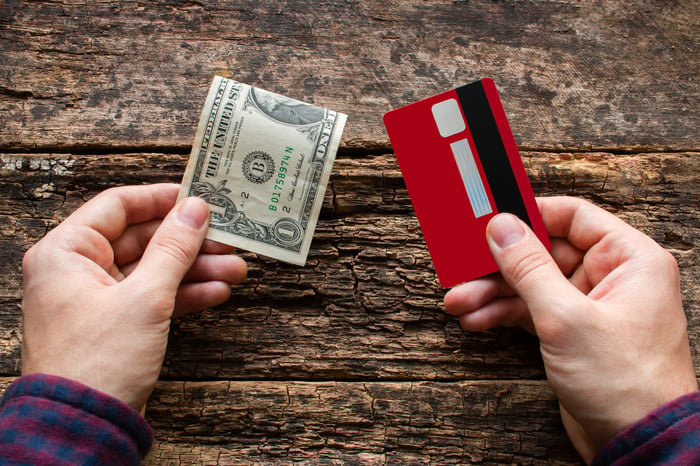 Visa has been doing extremely well lately, posting growth in all the right areas and throwing off a ton of cash. So I think investors would be correct to expect at least a little more be dedicated to dividends. That 0.7% yield is wafer-thin, no matter how much it's due to the company's impressive stock-price appreciation -- and yes, I'm glaring at you too, MasterCard.

To quote a shopworn phrase, Visa really should make hay while the sun shines -- and for the company, it's nice and bright outside just now.