Please ensure Javascript is enabled for purposes of website accessibility
Log In Help Join The Motley Fool
Free Article Join Over 1 Million Premium Members And Get More In-Depth Stock Guidance and Research
By Rich Smith - Updated Oct 10, 2017 at 11:56AM

Repeating its feat of last week, American Airlines Group (AAL 3.55%) stock jumped 5.1% in early trading Tuesday after the company filed an 8-K report with the SEC detailing its operating performance for Q3.

Despite having to cancel "approximately 8,000" flights due to the arrival of Hurricanes Harvey, Irma, and Maria in the quarter, American Airlines says that its total revenue per available seat mile (TRASM) for the quarter will probably be up "approximately 0.5 to 1.5 percent" in comparison to Q3 2016. 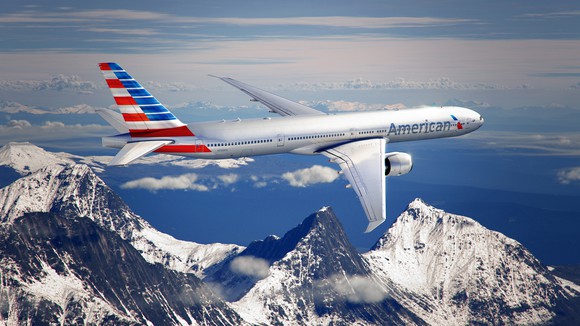 Management noted that these results are better than the "flat to up 1.0 percent" guidance it had previously issued "due to stronger than anticipated yield performance." Adding to the good news, American Airlines says that with operations going so much better than expected, its "pre-tax margin excluding net special items" (i.e., pro forma operating profit margin) will be "approximately 9.0 to 11.0 percent" -- also ahead of previous guidance, which was for pro forma operating margins between 8.5% and 10.5%.

Oh, and in case you're one of those investors who wonders what the future holds, as well as the past, American Airlines also promised that "fourth quarter TRASM growth vs. 2016 will exceed third quarter growth."

While certainly not dispositive, all of the above does tend to support American Airlines CEO Doug Parker's bold proclamation last week that his company will isn't "ever going to lose money again" -- at least if you limit the definition of "ever" to Q4 2017.