Nokia (NOK 0.22%) recently announced the discontinuation of Ozo, the high-end spherical VR camera that it launched just two years ago. The 360-degree camera was equipped with eight cameras, weighed six pounds, and was roughly the size of a cantaloupe. It initially cost $60,000, but the price was eventually reduced to $45,000.

Nokia stated that it would "maintain commitments" with existing Ozo customers like Disney (DIS -1.13%), which signed a multiyear VR filmmaking deal with the company last year. However, the Ozo wouldn't be sold to any new customers due to the slower-than-expected growth of the virtual reality market.

Nokia will lay off 310 employees from the unit, which accounts for nearly a third of Nokia Technologies' workforce. Nokia Technologies houses the company's patent licensing business (which licenses its brand, designs, and tech to device makers) and its digital health portfolio, which includes connected health device maker Withings.

In a statement, Nokia Technologies president Gregory Lee stated that the unit would pivot away from the VR market to "meaningfully grow (its) footprint in the digital health market." This makes strategic sense, but it also bodes ill for the near-term growth of virtual reality, which was once hailed as the "next big thing" in entertainment and computing.

Understanding the market for VR films

Spotting that market opportunity, GoPro partnered with Alphabet's (GOOG 1.17%) (GOOGL 1.16%) Google to launch Jump, a VR filmmaking kit and platform tethered to YouTube. The centerpiece of the bundle was the Odyssey, a 16-camera rig for producing spherical content. But when the Odyssey finally launched last year, its $15,000 price tag made it a niche device for professional filmmakers.

To reach more mainstream consumers, GoPro launched Omni, a "cheaper" $5,000 rig with six cameras, and recently introduced Fusion, a $700 device that packs two fish-eye cameras into a device which is only slightly larger than a single action camera. Google opened up its Jump platform to cheaper camera makers like Yi Technology, and allowed makers of cheaper stand-alone 360-degree cameras to post spherical videos to YouTube. 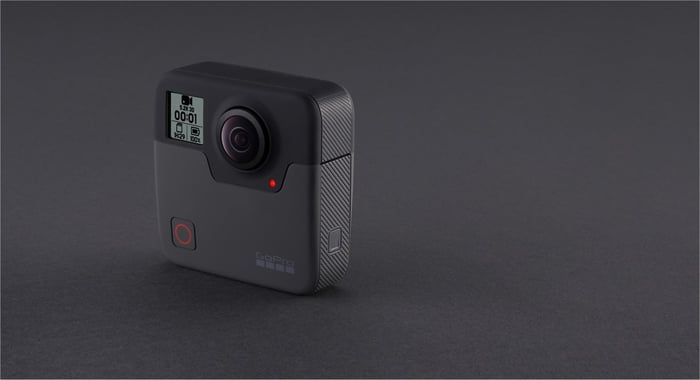 Google and Facebook both aggressively promoted 360-degree videos, and companies like Samsung and Ricoh reduced the average price of spherical cameras to less than $400. For a while, it seemed like VR filmmaking could gain more traction with mainstream consumers.

A reality check for the VR market

Unfortunately, it soon became clear that tech companies had gotten ahead of themselves with their bullish predictions about the VR market. Research firm SuperData reported that just 6.3 million VR headsets were shipped in 2016, with Samsung's Gear VR accounting for 4.5 million of those shipments.

Shipments of higher-end devices -- like Facebook's Oculus Rift and HTC's Vive -- came in at less than half a million due to their steep price tags and PC requirements. Facebook and HTC both slashed prices for their devices, but demand has remained tepid throughout the year.

In May, Facebook shut down Oculus Story Studio, the VR filmmaking division which had won an Emmy with its VR movie Henry. That move indicated that it was no longer cost-effective to produce expensive VR films for a limited audience and clearly indicated that Nokia's Ozo would struggle to find more buyers.

How does this affect Nokia?

The Ozo only generates a tiny percentage of Nokia Technologies' revenues, which rose 90% annually (on new licensing agreements) and accounted for about 7% of its top line last quarter. Therefore, shutting down Ozo should have a minimal impact on its top line growth, but bolster the Technologies unit's operating profits and give it more freedom to invested in higher-growth markets like connected health devices.

But for companies that are more invested in the growth of the VR market -- like GoPro, HTC, and Facebook -- the death of the Ozo indicates that VR films won't redefine digital entertainment anytime soon.