Tech companies still believe that VR is the next big thing, but mainstream adoption remains sluggish.

Many tech companies believe that virtual reality (VR) will be the next major growth market. That's why big names like Facebook's (FB 1.83%) Oculus, HTC, Sony (SONY 1.90%), Samsung, and Alphabet's (GOOG 4.16%) (GOOGL 4.20%) Google have all jumped into this nascent space.

Tech advisory firm Digi-Capital believes that the VR market will grow from $2.7 billion in 2016 to $25 billion by 2021. The top headsets in the market last year included Samsung's Gear VR, Sony's PlayStation VR, Facebook's Oculus Rift, HTC's Vive, and Google's Daydream. But the only headset to top a million shipments was the Gear VR, which launched in late 2015, before the other devices. 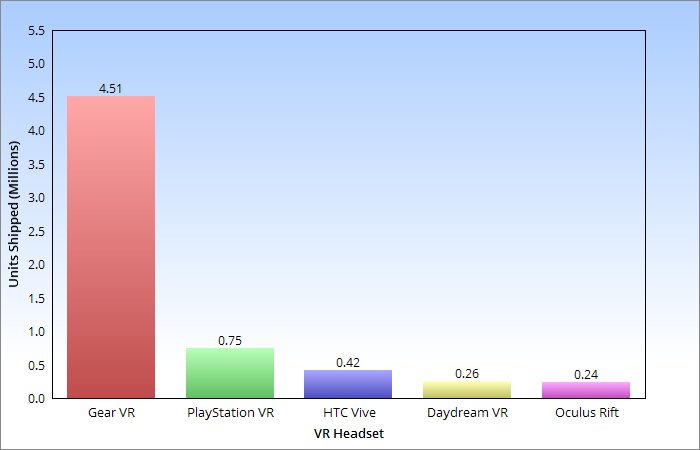 That disparity is likely due to the fact that the $100 Gear VR, which only works with Samsung's newer flagship devices, costs much less than the other options. The $800 Vive and $600 Rift both require high-end gaming PCs, which can run more than $1,000.

The PlayStation VR is a cheaper option at $400, but only works with the PlayStation 4. Google's $80 Daydream, which arrived near the end of 2016, is basically a Gear VR for non-Samsung Android devices, but the list of compatible devices remains short.

It's too early to declare a winner in the VR race, but the market this year will likely look similar to 2016 -- cheaper smartphone-based headsets will probably sell better than pricier PC and console-based ones, as the latter two appeal more to hardcore gamers than mainstream consumers.