Here's some hard data on the digital video giant's rising membership fees, and did you notice that the old DVD business still makes a respectable difference on the bottom line?

When Netflix (NFLX 2.90%) reports earnings, it's always a big event. Headlines flare, column inches grow into column miles, and share prices either plunge or soar on the news. Everybody has an opinion, pro or con.

The recent third-quarter report was no exception. Netflix crushed every estimate of revenues and subscriber additions, the international segment finally turned a profit, and the stock reached fresh record prices the next day. Fellow Fool Danny Vena echoed the core message of many market watchers when he proclaimed that it's all about the subscribers for Netflix.

Danny isn't wrong, but a couple of important details in this report deserve a closer look. Here's what you haven't heard about Netflix's third-quarter results.

Thing 1: Average membership fees are on the rise 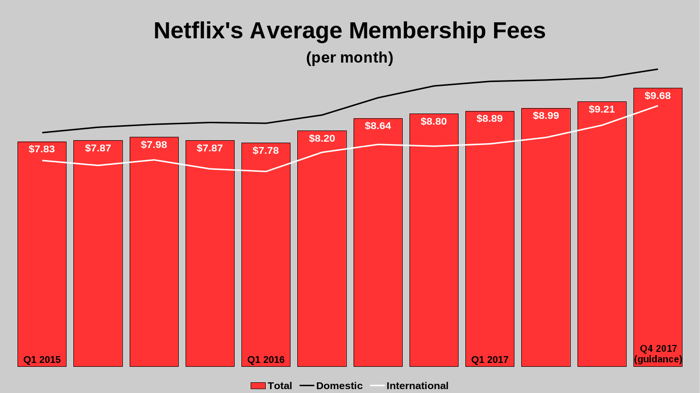 Two years ago, the average Netflix subscriber spent $7.83 per month on the company's video-streaming fees. That's on a global level. Domestic customers sent in $8.14 per month while international members scrounged up $7.17 per month.

Today, those figures have increased by roughly 20%. By the end of 2017, Netflix's management expects to collect monthly fees of $10.35 per domestic subscriber and $9.08 per overseas member, or $9.68 per customer overall.

The company is going about these increases in a slow and methodical way. Once bitten is twice shy, and the Qwikster episode counts as a pretty nasty bite -- Netflix isn't likely to make dramatic price changes again.

But the monthly membership fees do tend to crawl upward over time, partly because of soft-touch price increases and partly because customers are signing up for higher-quality streaming plans. Management is not providing any detail on the balance between these growth drivers, but it's clear that both are in play here. And don't forget that customers are signing up by the millions, proving that the target audience isn't overly worried about an additional buck here and there. Netflix is still way cheaper than a traditional cable TV package, assuming that you were going to buy a broadband internet plan anyhow.

Yes, the red DVD envelopes are old hat these days. That segment accounted for just $110 million of revenue in the recently reported third quarter, or 3.7% of Netflix's total sales. Additions to the DVD library added up to a $10 million investment in the same period, far below the $2.3 billion investment in streaming content assets. DVD sales fell 17% year over year and are expected to continue sliding in the next quarter.

But there's still life in the old warhorse, and DVD sales are making a significant contribution to Netflix's business model even now.

The segment provided contribution profits of $60 million in the third quarter. This operating profit is declining slower than the division's revenue line, which means that contribution profit margin is on its way up. That margin moved up from 49% in early 2015 to 50% a year later, and stands at 57% today. DVD shipments pulled in 10% of the company's total operating profits, punching way above its shrinking weight.

The service is valuable thanks to a kink in American copyright law known as the first-sale doctrine. Anything published on a disc, a tape, or a holographic data cube can be resold, rented out, and distributed again. That's not true for downloaded or streamed content, so the DVD library will always hold many more titles than the all-digital service. So for customers with eclectic tastes, DVD mailers can fill that need for hard-to-find movies in a pinch. Amazon.com (AMZN 3.15%) meets the same need by attempting to sell DVDs and Blu-rays wherever your Prime Video search comes up empty.

I don't think DVD services will be around forever. The service will eventually diminish to the point where it doesn't make economic sense to run the shipment centers anymore. At that point, Netflix will spin the DVD service off as a separate business, either as a tiny company traded on the public market or as an asset sale to private-equity investors. Chief DVD rival Redbox already took the private-equity exit, giving Netflix's DVD.com a set of footsteps to follow.

Meanwhile, we Netflix investors can't forget about the DVD business quite yet. It's still making waves.