Shares of cleaning equipment manufacturer Tennant Company (NYSE:TNC) plummeted more than 10% in early Thursday trading after the company reported third-quarter 2017 adjusted earnings of $0.32 per share -- barely half of the $0.63 per share that Wall Street had predicted. Despite retracing somewhat after the initial drop, Tennant's stock was still down 8.1% as of 10:50 a.m. EDT. 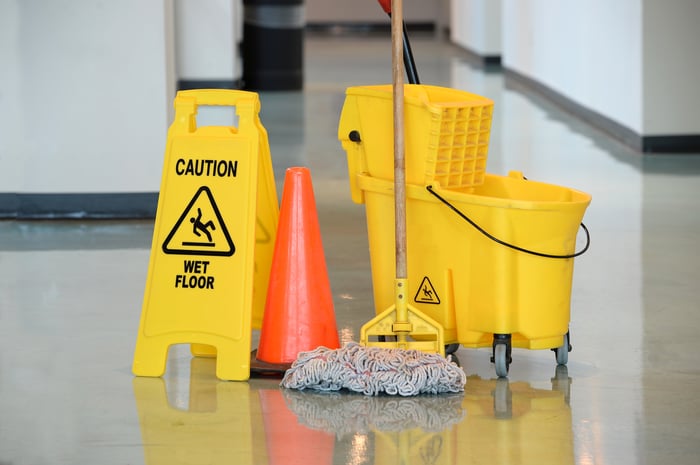 The news gets worse. When calculated according to GAAP accounting standards, Tennant earned only $0.20 per share last quarter, less than one-third of the $0.64 per share it had earned in the year-ago quarter. This was despite enjoying a 31% surge in sales year over year.

Gross profit margins at the company declined 270 basis points to 39.9%. Operating profit margins were nearly cut in half, falling to 4.2%. On top of all this, interest costs surged to $6.1 million, slicing deeply into operating profits, and resulting in a massive decline on the bottom line.

Tennant CEO Chris Killingstad reiterated the company's earlier guidance targeting full-year sales of between $960 million and $990 million, "reflecting an increase of 18.7 percent to 22.4 percent from fiscal 2016 results." However, Killingstad cut Tennant's 2017 earnings guidance pretty drastically, from a previous target of $0.85 to $1.05 per share to a new target ranging between $0.05 and $0.25 per share. The company blamed "slower progress against our gross margin recovery initiatives" for the cut in guidance.

Despite admitting to "some near-term setbacks," though, Killingstad insisted that the company's restructuring is on course and that it is "pursuing gross margin recovery through better productivity in our service organization, plants and supply chain, continuing our integration of IPC [which it acquired in April], solid sales execution across all geographies, and robust cash generation to enable reduction of our debt."

With Tennant shares now trading for nearly 100 times earnings, and apparently headed for a valuation closer to 250 times earnings (if Tennant maxes out its new guidance), some margin recovery would truly be nice to see.