For years, off-price chains were the "sweet spot" in retail as discount brands put up steadily growing comparable sales as they opened new stores. As department stores floundered, analysts said chains like TJX Companies (NYSE:TJX), the parent of T.J. Maxx and Marshall's, were succeeding with a model that couldn't easily be outsourced to the web. With low prices and the "treasure hunt" effect, which draws shoppers to find an ever-rotating selection of items, TJX was thriving.

However, that golden age of off-price retail seems to be coming to an end as recent results from TJX and Nordstrom (NYSE:JWN) Rack show those chains are starting to experience the same problems that have plagued other apparel retailers. 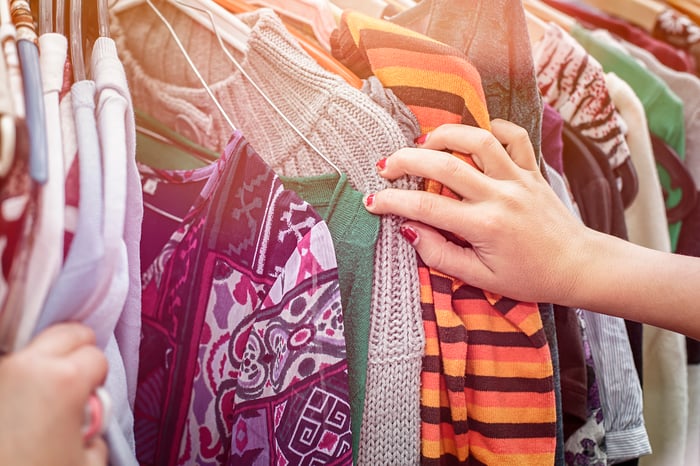 TJX shares fell 4% after its third-quarter earnings report came out as the company said comparable sales at Marshall's and T.J. Maxx, the division it calls Marmaxx, fell 1%. Management blamed the slowdown on warmer-than-normal weather and hurricanes, but through the first three quarters of the year, Marmaxx's comparable sales have only increased 0.3%, after a 5% jump through the first three quarters of last year.

Meanwhile, comparable store sales at Nordstrom Rack plunged 5%, and are down 2.3% so far this year. Both TJX, which also owns Home Goods, and Nordstrom are making big bets by adding more off-price stores.

Nordstrom has already opened 15 new Rack stores this year, bringing the grand total to 232, nearly double the number of full-line department stores it has, while TJX has added 40 new T.J. Maxx stores over the last year in the U.S and 30 Marshall's. Domestically, it now has 2,276 stores between the two concepts combined.

At a conference earlier this year, TJX said it planned to add 1,300 stores to North America over the long term, while Nordstrom is hoping to have 300 Rack stores by 2020, 68 more than it has today.

Nordstrom and TJX aren't the only ones in the off-price sector looking to new stores to drive growth. Ross Stores (NASDAQ:ROST), another off price chain, has added 96 stores this year, bringing its grand total to more than 1,600, and it sees room for eventually 2,500 stores, including dd's Discounts, its secondary chain.

Burlington Stores (NYSE:BURL), meanwhile, says it plans to open 37 stores this year in addition to the 600 it already has.

Off-price chains aren't the only ones running into this cannibalization problem. Fast-fashion retailers like H&M have also scaled back store-opening plans in the face of declining sales growth, and H&M is now focused on investing in other brands like the high-end Arket.

Retailers generally look to open more stores as long as underlying growth can support it, but what happens when comparable sales suddenly slow like they are with TJX and Nordstrom Rack? The restaurant industry is dealing with just such a conundrum. Oversaturation among fast-casual and casual-dining restaurants has caused a number of chains to scale back on store openings, or even close locations just a few years after so many fast casual IPOs promised huge growth ahead.

Off-price retail may be heading for the same outcome, except unlike restaurants, these companies can shift to online. In fact, they may be better off in investing in e-commerce where they won't have to worry about the kind of oversaturation or cannibalization.

Brick-and-mortar apparel retail may already be declining. At Nordstrom, which has resisted closing stores as many of its peers are doing, brick-and-mortar sales have fallen by $137 million this year, while e-commerce sales are up $353 million. Amazon is expected to surpass Macy's as the leader in apparel sales this year, and subscription services like upcoming IPO Stitch Fix, which has reached $1 billion in annual sales after launching six years ago, are rare success stories in apparel retail.

Opening new stores will only work until it doesn't, and even the off-price retailers like Ross and Burlington that are still seeing growth need to keep that in mind.

With comparable sales turning south at Nordstrom Rack, T.J. Maxx, and Marshall's, those companies would be mindful to look to other avenues for growth such as e-commerce or acquisitions. Increasingly, off-price retail is looking like a bad bet for companies and investors.