Please ensure Javascript is enabled for purposes of website accessibility
Log In Help Join The Motley Fool
Free Article Join Over 1 Million Premium Members And Get More In-Depth Stock Guidance and Research
By Jeremy Bowman - Updated Nov 6, 2017 at 7:07AM

Restaurant growth has outstripped population growth by a wide margin in recent years, and it's become a problem for the industry.

2017 has been a banner year for stocks. The S&P 500 is up more than 15%, and the Dow Jones Industrials and the Nasdaq have climbed even faster. However, one industry has been left out in the cold: restaurants.

Restaurant stocks, especially fast-casual and casual-dining companies, have largely underperformed the market as they wrestle with a number of challenges. Labor costs are rising, mall traffic is falling, and food deflation had made prices lower at supermarkets; but the biggest problem for the industry appears to be oversaturation. 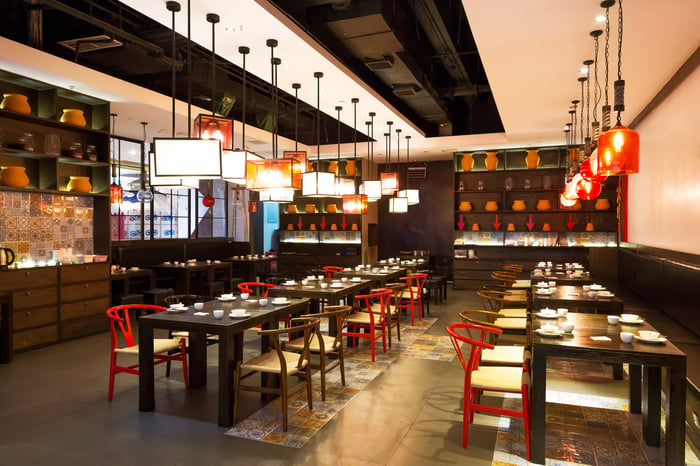 A problem that won't go away

Since 2010, the total number of restaurants in the U.S has grown by 13% to more than 620,000, while the population has increased by just 4.9%.  For a while that expansion fueled strong growth in the industry, but same-store sales turned negative last year as the factors above began to weight more heavily on Americans.

Same-store sales across the industry have fallen almost every month in the past year and a half. According to research firm Tdn2k, comparable sales dropped 1.9% in the third quarter and traffic was down 4%, making it the second-worst quarterly performance in the last five years. Hurricanes Harvey and Irma had modest impacts on that figure, but these drops nonetheless show the broader challenges the industry's facing.

Some have responded by curtailing once-ambitious store expansion plans. Casual-dining chain BJ's Restaurants (BJRI -1.53%) said it would open just four to six restaurants next year, down from 17 last year, as the company reported its sixth straight quarter of declining comparable sales. Management also cited a tight real estate market and high construction and labor costs for the decision. It still sees room in the market to expand to 425 restaurants, more than double the number it has today, it's just clear that will take longer than the company had originally envisioned.

Chipotle Mexican Grill (CMG 0.10%), whose shares nosedived after its 2015 E. coli outbreak, also slashed its restaurant opening forecast for next year. The burrito chain said it would open just 130-150 locations next year, its lowest total since at least 2011 and a move it probably should've made after its food safety crisis. Two-year comparable sales fell to -21% in its most recent quarter, and the company is struggling to win back lost customers. Increased competition is one reason why that has proven difficult.

Some chains have even begun closing locations, including DineEquity (DIN -1.75%), the parent of Applebee's and IHOP, which said in August it would close up to 160 locations out of about 2,000 in the U.S. and 3,700 globally. Privately held Subway, the country's largest restaurant chain by number of locations, closed more shops than it opened last year for the first time ever.

However, some chains are stepping on the gas pedal in spite of the headwinds. Shake Shack (SHAK -0.57%), which has posted a -1.9% decline in same-store sales this year, said it would open 32 to 35 company-owned locations next year, growing its base by about 40%. Fellow fast-casual burger chain Habit Restaurants (HABT) just reported its first same-store sales decline in 13 years, but is also growing its base by about 20% this year.

With most restaurant chains still eyeing expansion, which is one way to compensate for flagging comparable sales, and franchisees being pressured to open new stores, the oversaturation issue isn't going to go away. And the other problems that the restaurant industry is facing, like declining mall traffic and rising labor costs, only exacerbate the bottom-line effects of heightened competition.

There have been some rare winners despite the broader malaise. McDonald's (MCD -0.13%) shares have surged nearly 40% this year as new CEO Steve Easterbrook revamped the Golden Arches with moves like all-day breakfast, better value deals, and refranchising company-owned locations. Domino's Pizza (DPZ 0.05%) continues to post blowout comparable sales growth, with the metric up 8.4% in the most recent quarter as the company rides the growth in delivery.

But the oversaturation problem seems entrenched. Companies are reluctant to close stores or even cut down on expansion plans as there's still pressure to deliver growth for investors. It will likely take years for the imbalance to shake out, which means that the downward trend in comparable sales isn't suddenly going to reverse itself.

Like retail stocks, which have been challenged by the rise of e-commerce, restaurant stocks will be plagued by oversaturation for the foreseeable future. It's a sector better off avoided.