Chipotle Mexican Grill, Inc. (NYSE:CMG) is starting to look like a case study in mismanagement.

Since a series of foodborne illness outbreaks in 2015 that were arguably the result of misplaced priorities, the stock has fallen nearly two thirds. The E. coli crisis was exacerbated by management's reluctance to apologize and its attempt to blame the customer backlash on the media and CDC reporting methods. The company's marketing efforts since then have ignored customers' underlying food safety fears, and management has even admitted that in-store operations are subpar.

Its recent earnings report was a stinker across the board. Same-store sales came in at just 1% following a 21.9% drop the year before, and EPS was down more than 85% from two years ago.

But one key number mostly flew under the radar.

The burrito chain said that it would open just 130-150 restaurants next year, well below the 195-210 clip it had aimed for this year and the 240 restaurants it opened last year. It hasn't opened that few restaurants since at least 2011. Unbelievably, the year after Chipotle got clobbered by the E. coli crisis, the company opened a record number of stores. 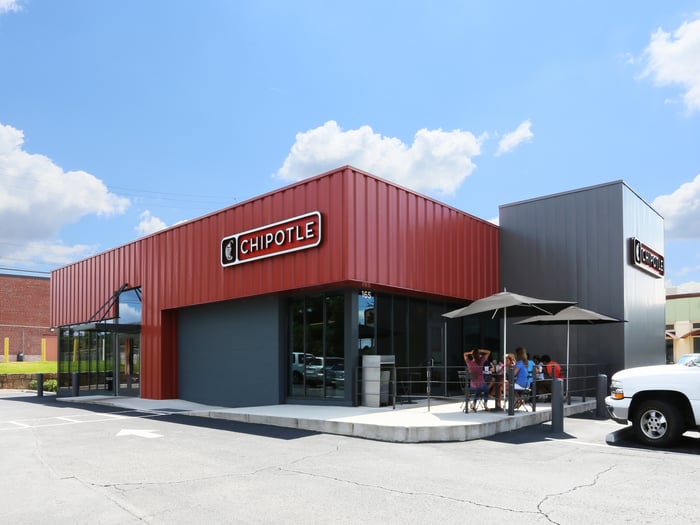 New store openings have been a distraction for the company. Image source: Chipotle.

Here's how CEO Steve Ells addressed this change on the recent earnings call:

And yet, opening up new stores is a big distraction. You have to start thinking about hiring people months and months in advance. You've got to train people in advance of the opening. You sometimes are taking people from existing restaurants to staff a new restaurant. Turnover of a new restaurant often is high. You hire people and they didn't know what they signed up for, and so the turnover is very high. So, it's a distraction in a lot of ways.

The decision seems to be motivated by a retraining program being guided by new Chief Restaurant Officer Scott Boatwright, but that approach is much different from Chipotle's attitude following the E. coli outbreak. At that time, management responded to a question about slowing down store openings by saying "[i]t never occurred to us" to curtail store openings.

But Chipotle clearly made the wrong decision in going ahead full speed following the E. coli crisis, and that decision is further evidence of the company's overconfidence in its recovery, which is seen in its consistent inability to apologize to its customers. As Ells explains, opening new stores is hard, much harder than running mature restaurants where everyone and everything is in place. It's worth remembering that Chipotle does not franchise, so the company is responsible for all of its store openings.

As a likely result of not scaling back store openings sooner, Chipotle's operations became unacceptable late last year, according to Ells' own admission. He blamed slow-moving lines, dirty tables, and poorly stocked drink stations for the company's poor sales recovery. The company was simply trying to do too much at once, and the decision to open a record number of stores last year is even more perplexing considering the brand was in the dumps. A new Chipotle location, after all, is going to be much more productive if people are no longer worried about getting E. coli there. Management should have taken the time and effort to get lapsed customers back in the door before plowing full-speed ahead with expansion.

Slowing down store openings so the company can improve training and operations is the right move, but I fear it's too late to matter for investors. The recovery is essentially over -- the company reported just 1% same-store sales growth in its most recent quarter, and queso has been a clear disappointment. Improving operations alone may not be enough to bring back lapsed customers.

Chipotle may never return its pre-crisis level of performance, and the stock would now have to nearly triple to regain the losses over the last two years. Slowing down store growth and working on operations is the right move, but at this point, the company needs something bigger to boost sales and turn the stock around.