Please ensure Javascript is enabled for purposes of website accessibility
Log In Help Join The Motley Fool
Free Article Join Over 1 Million Premium Members And Get More In-Depth Stock Guidance and Research
By Jeremy Bowman - Updated Oct 27, 2017 at 7:34AM

The casual-dining chain posted another round of underwhelming results.

The bar keeps getting lower for BJ's Restaurants Inc. (BJRI 1.89%) as the casual-dining chain came into today's third-quarter earnings report with five-straight quarters of declining comparable sales. The stock touched a three-year low in September, but has recovered some of those losses since then.

Still, tough times have continued in the casual-dining industry as e-commerce is depleting mall traffic and making delivery more popular, and the industry, as a whole, seems to be suffering from overexpansion in recent years. BJ's has been no stranger to the broader malaise, and those trends continued through the third quarter as the company also suffered a one-two punch from Hurricanes Harvey and Irma. Let's take a closer look at the results. 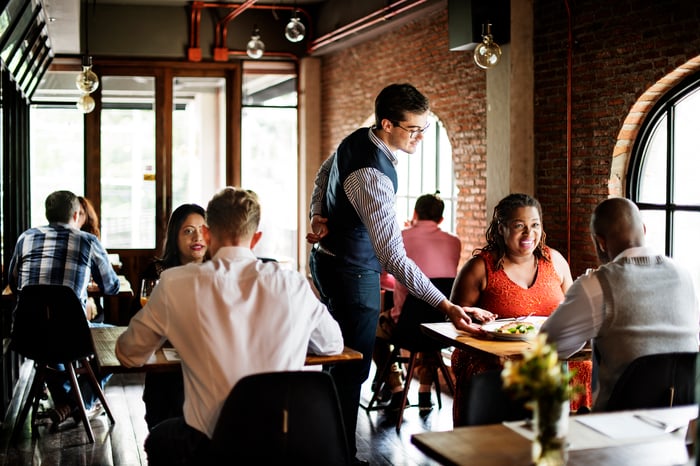 With Texas and Florida making up its second- and third-largest markets, BJ's took a bigger hit from Hurricanes Harvey and Irma than most restaurant chains. Management said it lost 103 operating days because of the closures, and that sales were impacted for an additional 143 days, costing it $2.6 million in lost sales and direct costs, like food spoilage. Taking away the adjustment for the hurricanes and a smaller one for severance costs, earnings per share (EPS) were $0.11.

Comparable sales declined 1.7% in the period, the sixth-straight dip in the key metric, though management said that the company outperformed sector averages on both traffic and sales. Separately, BJ's also announced its first dividend payout in the quarterly release, at $0.11 a share, giving investors a dividend yield of 1.4%. BJ's also repurchased 800,000 shares, for $25.4 million in the quarter, and opened one restaurant.

CEO Greg Trojan acknowledged that the quarter "was a challenging time for us and the overall industry." However, he did paint a silver lining for the company, saying, "We are achieving significant progress on our sales driving initiatives" such as a new slow-roasted menu featuring prime rib, third-party delivery through DoorDash, and value offerings. Trojan also noted that comparable sales in September, excluding the effects of Hurricane Irma, turned positive, increasing 1%, and said comps were up 2% through the first three weeks of October.

Trojan summed up the next steps for the company, saying, "With the traction of our sales initiatives going into the fourth quarter, we continue to take a prudent near-term approach to our restaurant development program with the goals of expanding BJ's brand, improving financial returns and building shareholder value."

As Trojan alluded to, BJ's is only planning to open four to six restaurants next year, a decrease from 10 this year and as many as 17 in previous years. Management cited a tight real estate market and high construction costs as part of the reason for that decision, but falling comparable sales and profits are also playing a role in that decision. The company believes it needs to slow down expansion and rebuild its margins before aggressively opening new stores again, which seems like a wise move as growing comparable sales is the best way to improve profitability.

Management still sees room in the U.S. for 425 restaurants, up from 195 today, but investors should hope that next year's store-opening guidance is just a temporary measure. If comparable sales don't return to growth, that goal of 425 locations starts to seem unrealistic.