The apparel specialist has an amazing track record of dividend growth, but can it continue?

The retail sector has seen a lot of pressure in recent years, and VF Corp. (VFC 2.72%) hasn't been immune to the downward trends that the industry has suffered through during that period. Yet the company behind well-known brand names like The North Face, Vans, and Timberland has found ways to get through difficult conditions before. Bullish investors are optimistic that its premium products will remain fan favorites and keep shoppers coming back for more, whether they visit physical store locations or buy those products online.

One of the big benefits that VF investors have gotten over the years is a steady and rising dividend. But some investors still aren't sure whether the apparel giant can manage to keep itself moving forward in a fast-changing retail world. Below, we'll look more closely at VF Corp. to see whether investors can rely on its quarterly payout going forward.

How does VF's dividend yield look?

Dividend investors like high yields, but stocks that pay too high a yield arouse suspicion. VF Corp.'s 2.5% dividend yield is just about right: not so high that it raises major concerns about sustainability, but above the market's average of around 2%.

VF's stock has seen fairly wide swings in yield over the past decade, ranging from a low of around 1.5% a couple years ago to levels as high as 5% during the worst of the financial crisis. A recent slump in the stock price was partially to blame for bringing the yield higher, but VF's dividend growth has provided a strong foundation for its level of income. 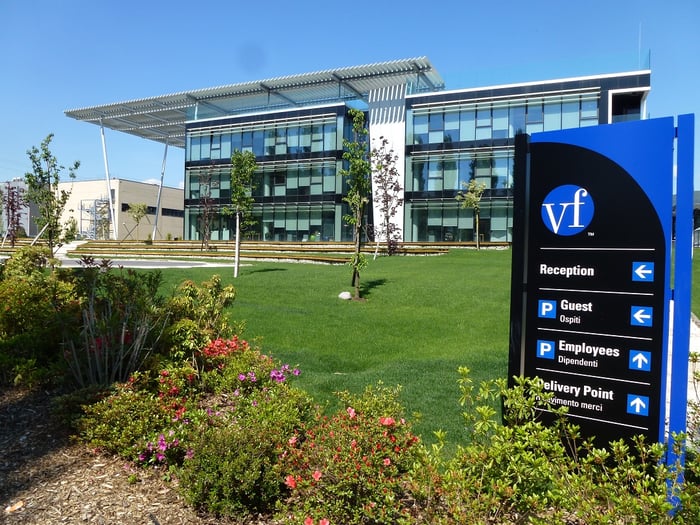 VF Corp.'s payout ratio is now around 70%. That's not dangerously high, but it doesn't leave a lot of excess earnings for the retail products producer to reinvest back into its business. It's also higher than VF has historically seen, with the stock spending several years during the early 2010s in a much safer range of 30% to 35%.

Just since 2014, VF's payout ratio has doubled, reflecting a combination of higher dividends and weaker earnings. Impairment charges have been largely responsible for a slumping bottom line for the company, but VF is working on restructuring efforts in order to make the business stronger than ever. As those charges disappear, VF hopes to get its earnings back to more normal levels and reduce its payout ratio accordingly.

VF's dividend growth dates back 45 years. As a Dividend Aristocrat, VF has an even bigger incentive to deliver growth in its dividend year in and year out in order to maintain the qualification requirements for inclusion on that prestigious list. 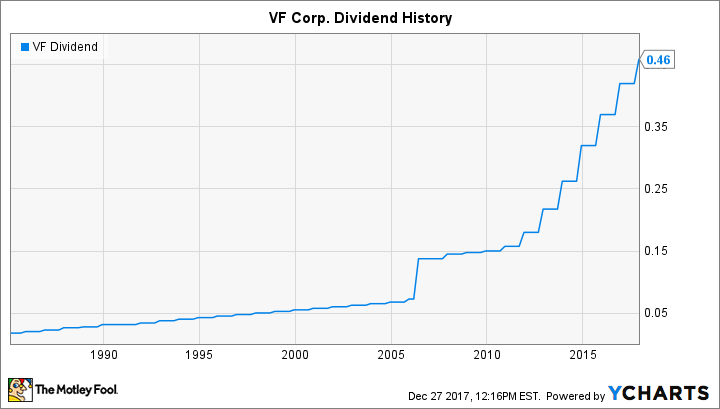 Despite earnings pressure, VF hasn't slowed in its dividend growth pace. Its most recent boost added nearly 10% to its quarterly payout, and that's consistent with the size of increases to the dividend dating back for seven years now. It's possible that the company's dividend growth rate will need to slow, but even token increases would still leave VF with a strong yield.

What's ahead for VF Corp.?

VF faces the same challenge that every consumer goods company is dealing with right now: how to adapt to a changing retail world. Historically, VF relied on brick-and-mortar stores to sell its products, both through partnerships with third-party retailers and via its own branded outlet stores. Customers, though, have stopped visiting stores as much as they did, and the rise of internet shopping has made it a lot more convenient for many to avoid having to leave their homes in order to buy the things they want.

However, VF is aggressively looking at ways to maximize its own product distribution. That includes efforts to build out its own direct-to-consumer channels, bypassing ailing retailers and getting its goods to customers without an intermediary. Rising revenue has been the result, and investors have taken comfort from a strong top line as well as VF's willingness to do stock buybacks to take advantage of poor share-price performance.

What's next for VF's dividend?

Having just boosted its payout, VF probably won't consider another dividend increase until late in 2018. Even so, if its corporate efforts keep panning out well, then investors should be pleased with the combination of long-term potential and current income that VF provides.