Home Depot (NYSE:HD) gave investors a big raise at the beginning of 2017, increasing its quarterly dividend 29%, to $0.89 per share. Home Depot's dividend growth over the last seven years has been nearly as exceptional as the increase in its stock price, up about 262% since the start of 2011.

Lowe's (NYSE:LOW) investors have seen the stock's dividend grow just slightly faster than Home Depot's during the same period, up 272%. And while this year's raise of 17% was less than Home Depot's, Lowe's has greater dividend growth potential going forward compared to its larger competitor.

Both stocks yield nearly the same amount as the S&P 500 overall. But with dividends expected to grow in the double digits for several more years to come, an investment today will yield much more in the future compared to the overall market. Investors interested in maximizing their yield in the long term ought to stick with Lowe's. 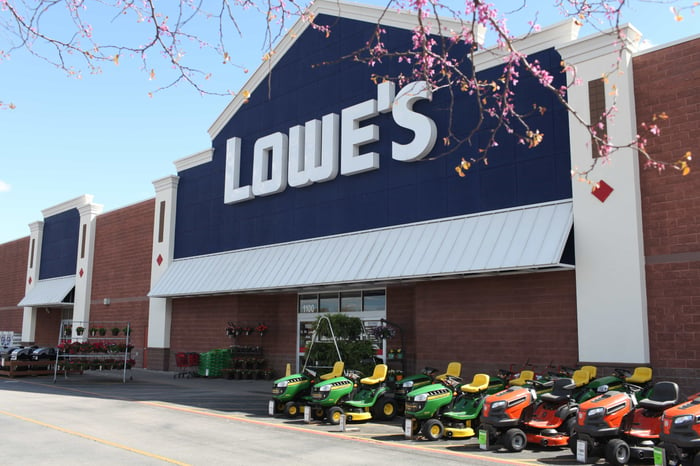 Dividends come from earnings -- will they grow?

The ability to pay a dividend stems from the company's earnings. While many investors prefer to look at cash flow as an indication of dividend safety -- after all, dividends are paid using cash -- earnings present a picture of how much the company increased (or decreased) its net worth, and thus its capacity to pay a dividend. Even if it doesn't have the cash, the company can borrow against, or sell off, assets to produce the needed cash for the payment. As long as the dividend doesn't exceed net earnings, the company is still improving its net worth and thus its capacity to pay an even higher dividend next year.

While a 1.5% difference in growth rates might not sound like much, that's nearly 8% compounded over the next five years. Lowe's has room to grow earnings through expanding margins and faster-growing revenue compared to Home Depot. Lowe's share-repurchase program also helps increase earnings per share as it takes stock out of circulation.

Home Depot, meanwhile, produces a far superior operating margin compared to Lowe's, and its operating efficiencies will continue to improve slightly as it scales in line with the rest of the industry, enabling earnings to outpace revenue growth.

Room to increase the payout ratio

With a relatively low payout ratio, Lowe's has much more flexibility to increase its dividend consistently year after year. If the housing market slows down and consumers stop investing as much in fixing up their homes, Lowe's can pull back on the buyback while continuing to raise its dividend. Home Depot could have a tougher time.

Investors shouldn't expect Lowe's to deviate much from its planned 35% payout ratio anytime soon, but it also has a track record of 56 years with a dividend increase, so extenuating circumstances could cause it to pay out more than 35% in order to keep the streak alive. Home Depot has a good dividend growth track record, as well, but it did go three years in the latter half of the last decade without a dividend raise.

Home Depot currently yields a few basis points more than Lowe's -- 1.87% vs 1.78%. But Lowe's will more than make up for its lower yield with faster growth over the next decade or so. If Lowe's dividend growth outpaces Home Depot's by just 1.5% per year, its dividend yield on an investment today will surpass the competitor's within four years. Cumulative dividends collected on a Lowe's investment will surpass the same amount invested in Home Depot within seven years, and it will only grow bigger.