Never underestimate the power of teen consumers. There are an estimated 26.8 million teenagers in the U.S., accounting for $264 billion in total spending per year, and their tastes and fashion choices often set the course for retailers.

One site to rule them all

Twice a year, once in the spring and again in the fall, the analysts at Piper Jaffray (NYSE:PIPR) survey thousands of teens with an average age of 16 years -- more than a third of whom are employed part-time -- about where they spend money online. Not surprisingly, Amazon.com (NASDAQ:AMZN) was the overwhelming favorite, with nearly half (49%) saying it was their top spot to shop. 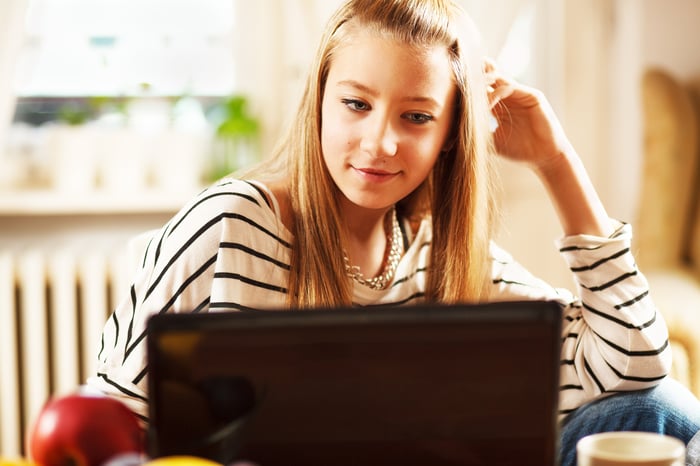 That was a 600-basis-point increase from the spring survey and 900 basis points more than last year. And while teens love Amazon, the e-commerce leader returns their affection.

Amazon recently launched a program allowing teens to set up their own accounts, under a parent's account, to buy merchandise through the site. Parents can add up to four teens to their accounts, which will give them their own login information and allow access to the parents' Prime membership benefits while also giving parents the right to decline a purchase.

It's a smart move because not only does it get young people spending on the website now, but it sets them up as future customers when they become adults. That's notable because although much has been said about Wal-Mart and Target going all out in their own digital efforts, the mass-merchandise discounters barely register a blip among teens.

Piper Jaffray found that Target has a 0.44% mindshare among teens while Wal-Mart's is negligible at 0.18%, making them a limited threat to Amazon.

A lot has been made of Nike's declining popularity among teens -- the athletic-apparel maker saw its brand power decline sharply while Adidas' star rose -- but as an online destination, Nike held its own as the second most popular site teens shopped, though it was with a distant 6% share. Still, that was up from 5% in the spring, albeit down from 8% in the fall of 2016. American Eagle Outfitters (NYSE:AEO) also held firm in third place at 5%, while eBay rose to fourth place, with 3% of the teens shopping there.

On the flip side, some retailers fell out of favor with teens. After appearing among the top 10 sites teens visited in prior surveys, these three sites are now nowhere to be seen.

Perhaps it's more surprising the upscale department store had even made the list to begin with, but Nordstrom (NYSE:JWN) made a brief appearance in the fall of 2016 in seventh place with a 1% share. The folks at Piper Jaffray ascribe the retailer's rise and subsequent fall to teens' initial love changing to growing disfavor for the Free People brand from Urban Outfitters (NASDAQ:URBN), because Nordstrom was a longtime seller of its clothes. Perhaps we'll see its return in the next survey as Free People is quickly becoming one of Urban Outfitters' best-performing brands.

Another staple of the teen survey, L Brands' (NYSE:BBWI) Victoria's Secret dropped from the list this fall. However, the change was not entirely unexpected: Two years ago, the analysts noticed that the lingerie site was falling out of favor with teens as they saw support for the brand "decelerating." It might not be so surprising then that L Brands reported third-quarter comparable sales down 4% at Victoria's Secret and noted they were down 11% year to date, a dramatic reversal from the 1% year-to-date gain notched a year ago.

Of all the brands on the outs with teens, Abercrombie & Fitch's (NYSE:ANF) Hollister brand raises the most eyebrows. That's because if there was one chain that was staving off a complete collapse of the Abercrombie chain, it was Hollister. Having adopted the fast-fashion ethos of swapping out clothes regularly in favor of what's trending, the California "endless summer" teen brand Hollister has been showing significant growth over the past year. Yet in the Piper Jaffray teen survey, it briefly appeared in the fall of 2016 in ninth place with only a 1% share, and then disappeared.

At the time the analysts noted Abercrombie itself was being positioned for an older demographic, but it may have been more of the gains made by American Eagle that displaced Hollister than anything the brand itself did.

Ultimately it is Amazon.com's game to lose. The e-commerce giant continues to dominate the mindshare of teens, just as it does with virtually every other age group. This Christmas season it accounted for almost half of all sales made online, and some 4 million people started up a Prime account in one week alone to gain the benefits of the service.

While teens are known to rebel against the choices their parents make, it's clear they're not willing to go against this juggernaut.