Please ensure Javascript is enabled for purposes of website accessibility
Log In Help Join The Motley Fool
Free Article Join Over 1 Million Premium Members And Get More In-Depth Stock Guidance and Research
By Rich Duprey - Updated Dec 6, 2017 at 3:29AM

The clothing retailer looks like it's on the comeback trail, but looks can be deceiving.

For a company supposedly at death's door, Abercrombie & Fitch (ANF -3.12%) is certainly showing a lot of life. The clothing retailer's third-quarter earnings report blew past analyst expectations on sales and profits.

While the results make it appear the retailer's turnaround strategy is taking hold, a closer look suggests Abercrombie & Fitch is still a sickly retailer and investors should hold off celebrating its resurrection for a bit. 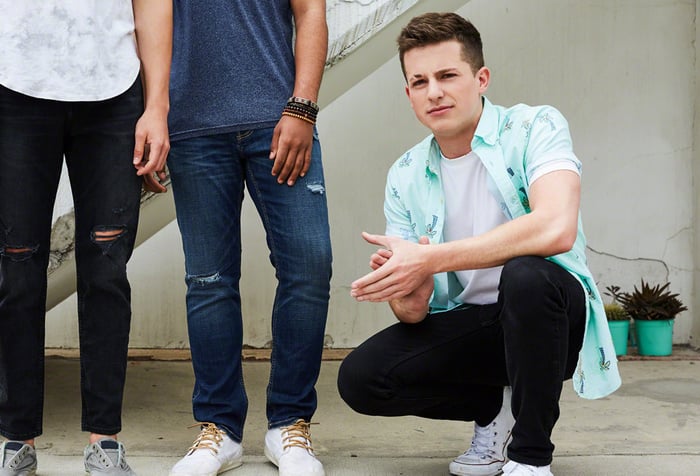 The teen-clothing retailer reported net sales of $859 million, well ahead of the $819 million analysts were expecting, while adjusted earnings per share of $0.30 were 36% greater than Wall Street's prediction of just $0.22 per share. The gains came mostly as a result of comparable-store sales rising 4% year over year, well ahead of analyst predictions of only a 0.3% increase, and the first time since 2015 that Abercrombie & Fitch has posted a positive number.

Abercrombie CEO Fran Horowitz said in a statement announcing the results: "We are pleased by the clear progress across all brands, delivering another quarter of sequential comparable sales improvement, and a return to positive comparable sales. This sales performance in combination with disciplined expense management drove profit growth, despite the promotional environment."

Yet digging a little deeper into the numbers shows there is is still a cancerous tumor that needs to be removed before Abercrombie & Fitch can be given a clean bill of health.

The retailer's results were once again driven solely by the Hollister brand. Like Gap, which is being hailed as another turnaround in the making, but one which is almost wholly driven by its Old Navy brand, Abercrombie & Fitch is being carried along by its California "endless summer" teen brand Hollister.

Net sales for the division surged 10% year over year to $508 million on the back of an 8% increase in comparable sales. In contrast, the flagship Abercrombie unit saw sales continue to fall for the period, down 2% on a 2% decline in comps. 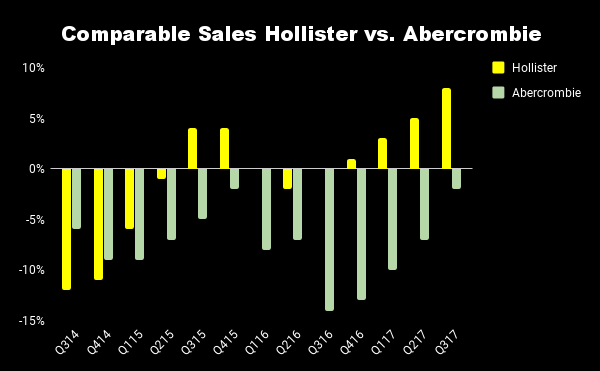 Admittedly, it's a better performance than Abercrombie has turned in in quite a while, and comparable sales have been improving all year long. In the first quarter they were down 10% and in the second they were down 7%, so a 2% decline is a big improvement and indicates it's moving in the right direction, but the continued underperformance shows why Abercrombie & Fitch continues to downplay its namesake brand. Over 60% of its stores now carry the Hollister name.

Although the Hollister brand is surging at the moment, it wasn't so long ago it was an ailing brand too, one that was actually performing worse than Abercrombie.

The change came as a result of the retailer's decision to co-opt the fast-fashion business model to better compete against the likes of H&M and Forever 21. It was the intense competition from such rivals that had Abercrombie considering selling itself to American Eagle (AEO -2.20%) this past summer, a merger that could potentially have been a disaster.

Abercrombie still hasn't quite figured out what its own identity is. It wisely jettisoned the dark, heavily perfumed stores targeted toward preppy youth in favor of "effortless, American style" that's now geared toward adults in their 20s, but it's not so certain the change is working, the improved sales numbers notwithstanding.

Abercrombie was going up against some horrible numbers a year ago when net sales plunged 13% to $358 million and comps were even worse, down 14%. Despite that exceptionally low hurdle to get over, Abercrombie was unable to do so and still posted lower year-over-year numbers.

At its height, Abercrombie thought it could capture the minds and wallets of shoppers from cradle to grave, launching Abercrombie Kids to get the toddlers and Ruehl for the more mature crowd who went off to college and got a job. It also experimented with lingerie at its Gilly Hicks outlet, which it used to describe as Abercrombie's "cheeky cousin" from Sydney, Australia.

While the Kids brand still exists, Ruehl was shut down and Gilly Hicks stores were closed, though the brand is still available online and within Hollister. By the looks of it, Abercrombie is trying to resurrect the Ruehl concept without actually calling it that, and we know how that ended the first time around.

Abercrombie & Fitch is still a work in progress, but it's the Hollister brand that is doing all the heavy lifting. That's not a model for success, and though the retailer might not be dead yet, it's much too early to say it's back on its feet, either.