Please ensure Javascript is enabled for purposes of website accessibility
Log In Help Join The Motley Fool
Free Article Join Over 1 Million Premium Members And Get More In-Depth Stock Guidance and Research
By Keith Speights - Feb 2, 2018 at 7:31AM

The gene-sequencing company didn't have much good news from the fourth quarter, but better days could be ahead.

Pacific Biosciences of California (PACB -5.35%) didn't have a lot of good news when it reported third-quarter results in November. Revenue fell from the prior-year period. And the gene-sequencing company posted a big loss on its bottom line.

Many observers had even lower expectations for PacBio's fourth-quarter performance. The company announced its results from the fourth quarter and for full-year 2017 after the market closed on Thursday. Did PacBio surprise the skeptics? Here are the highlights from the company's fourth-quarter update. 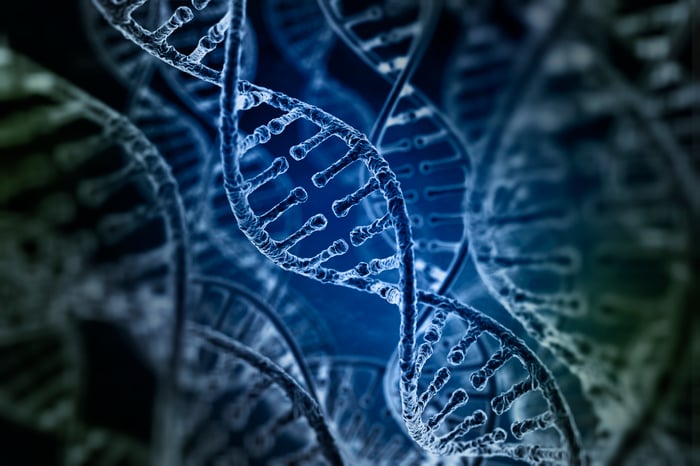 Although PacBio's total revenue declined from the prior-year period, there was a sliver of good news. Product revenue increased 6% year over year, to $21.8 million. However, service and other revenue fell 18.3%, to a little over $3 million, wiping out much of the product-revenue gain.

This revenue decline was only partly responsible for PacBio's deteriorating bottom line. The company's operating expenses increased 2.6% year over year, to $30 million. PacBio didn't spend as much in the fourth quarter of 2017 on research and development (R&D) as it did in the prior-year period. However, higher sales, general, and administrative expenses more than offset the decline in R&D spending.

At first glance, it might appear that PacBio headed in the right direction in the fourth quarter with an improved net loss per share. However, the only reason for the improvement was a 25.5% year-over-year increase in outstanding shares.

Perhaps the best metric from PacBio's fourth-quarter update was its full-year 2017 revenue of $93.5 million. That reflected a 3% increase from the prior year. However, the company's net loss in 2017 was $92.2 million, significantly worse than the $74.4 million loss posted in 2016.

There's no getting around that PacBio's fourth-quarter performance was pretty dismal. However, there are some reasons to think that the company's situation could get better.

At the top of the list of those reasons is PacBio's big sale to BGI Genomics announced on Jan. 25. BGI Genomics provides next-generation sequencing and clinical-testing services to support academic research, drug development, and diagnostics. The company, a division of BGI, is headquartered in China, but also has service labs in the U.S. and Denmark. PacBio said that BGI Genomics agreed to purchase 10 Sequel systems. The Chinese company already has two Sequel Systems and a PacBio RS II Sequencing System.

The Asian market presents, perhaps, the best opportunity for PacBio to grow. Over 30% of the company's 2017 revenue came from China. That's up from less than 10% in 2016. South Korea is another important Asian market for PacBio.

As the company sells more systems, it will benefit in another way: growth in consumables revenue. PacBio saw consumables sales jump around 75% from 2016 to 2017, primarily stemming from its Sequel gene-sequencing system.

There's also one other positive that investors can expect as PacBio reports quarterly results in 2018. While year-over-year comparisons for 2017 were negatively impacted by the loss of revenue from the Roche contract, that won't be an issue going forward.

However, despite these positive things to look forward to, investors should be prepared for at least one not-so-positive development. PacBio reported cash, cash equivalents, and investments, excluding restricted cash, totaling $62.9 million as of the end of 2017. With the company continuing to lose money, another stock offering -- which would dilute the value of existing shares -- is likely on the way this year.