Twenty years after the human genome was sequenced, a new wave of discovery has begun.

When then-President Bill Clinton announced the completion of the Human Genome Project in 2000, there was work left to do. The effort had really produced a "working draft" that would be completed three years later. It turns out even that announcement was a bit misleading. About 8% of our genetic instructions remained untouched even after the sequencing project officially ended.

According to researchers, those gaps have now been filled in. The accomplishment is thanks in large part to new sequencing technology from Pacific Biosciences of California (PACB 9.07%). PacBio's role in this technical achievement might not surprise anyone who has been following the company over the past year. Its most recent products opened up new possibilities in genomics. That could translate to huge gains for shareholders in the years ahead. 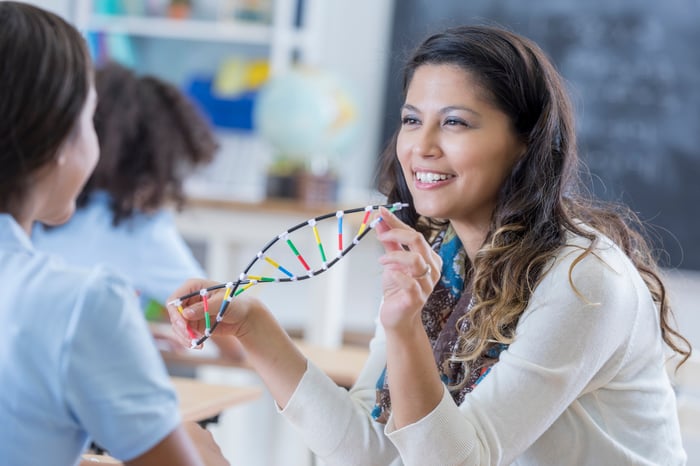 All the pieces are in the box

The initial project relied on sequencers like those made by Illumina (ILMN -8.82%), which reassemble short fragments of DNA after cutting them up and decoding them. This method is called short-read sequencing and it makes identifying long patterns in our DNA untenable. It has been a favored method due to its combination of high throughput and low cost and has long been considered the standard. That's why its stock outperformed PacBio's up to last year.

PacBio's method -- known as long-read sequencing -- which doesn't require the cutting and reassembling, uses lasers to read a sequence over and over for accuracy. Like a screwdriver and a drill, each has its own purpose. PacBio's long-read method is more expensive and has previously suffered from accuracy concerns.

Using long-read sequencing to complete the genome isn't just an academic exercise. Many believe the key to unlocking some of the most perplexing diseases lies in the missing or "dark" genes. The mutations that cause these diseases could be in regions that are hard to sequence with previous approaches. Now that researchers seem to have new pieces of the genetic puzzle, it wouldn't be surprising to see new breakthroughs in the future.

Sometimes even what we think we already know turns out to be wrong. In 2018, Johns Hopkins discovered a large chunk of genetic information in a group of Africans that was completely missing in what was considered to be the complete human genome. In some animals, scientists have discovered "missing" genes, finding that they had simply mutated so much in the species that they weren't initially identifiable. Every new tool spurs more research, and PacBio is already seeing the demand.

Completing the human genome is great publicity for PacBio's Sequel instruments. The initial Sequel system, introduced in 2018, addressed a long-standing criticism of long-read sequencing: accuracy. The Sequel II introduced hardware and software upgrades and produced eight times the data compared to the previous system. With the Sequel IIe System in October of last year, customers were freed from post-processing data and were able to integrate workflows into the cloud. Wall Street noticed. The stock is up 105% since, outperforming Illumina.

After the pandemic led to a year-over-year drop in sales in 2020, the company's first quarter signaled blue skies ahead. Revenue was $29 million, up 86% compared to last year. That was driven by placing 41 Sequel II/IIe systems, blowing away the 11 systems placed in the same quarter last year. On the customer front, Laboratory Corporation of America increased its commitment to using the company's long-read sequencing. It is partnering with the Centers for Disease Control and Prevention (CDC) to detect coronavirus variants by creating whole genomes. Management also announced a multi-year collaboration to expand Invitae's testing by creating a high-throughput sequencing platform.

For investors who think they missed the genomics revolution, there is hope. New discoveries open up new possibilities, and unlocking more of our DNA will likely spur a new wave of research. With PacBio's long-read sequencing technology at the forefront, sales could skyrocket. If Illumina's past success is any indication, shareholders may see huge gains in the decade ahead.

Why Pacific Biosciences of California Stock Is Down Today