Please ensure Javascript is enabled for purposes of website accessibility
Log In Help Join The Motley Fool
Free Article Join Over 1 Million Premium Members And Get More In-Depth Stock Guidance and Research
By Jason Hawthorne - May 29, 2021 at 6:45AM

Incredible scientific advances could reward investors -- if they have the patience.

Ten years doesn't sound like a long time. In the world of investing, it can seem like eons. Some reports show investors hold the average stock just 5-1/2 months. For a trader focusing on the stock price, that's a lot of red or green days that aren't very meaningful to the business. For an investor focusing on the business, it might only be long enough to hear one quarterly update from management.

To keep from getting whiplash, investors in Twist Bioscience (TWST 4.52%) and Pacific Biosciences of California (PACB 9.13%) will need to be focused on the long-term opportunity for synthetic DNA and long-read genome sequencing, respectively. Each company has a unique position in the life science industry, but short-term volatility could shake the confidence of anyone worried about the stock price over the next year or two. That's why anyone adding these stocks to a portfolio should plan to own them for a decade or more. 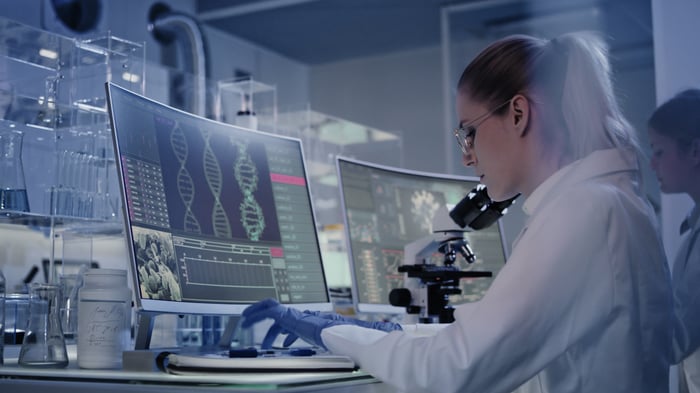 Twist has a proprietary method for manufacturing synthetic DNA. It's able to write more than 1 million short pieces of DNA on each silicon chip.

Although Twist generates about half of its revenue from NGS tools, the potential applications and markets the technology could open up are immense. Management sees the current opportunity at $1.8 billion, but billions more could be added as costs come down for drug discovery, sustainable agriculture, materials, and data storage.

One of the more amazing recent applications has been the creation of synthetic biomaterial. Researchers have created material nearly as strong as a spider web. It was done by embedding genes from spiders in microbial cells, which reproduce and generate the material.

Another mind-blowing application is data storage, where the familiar ones and zeros of the computing world can be converted into the building blocks of life: the A, G, C, and T of DNA. With an estimated 44 billion terabytes of data existing at the beginning of 2020, the need to create a new method of storage is approaching. With its incredible storage density, DNA could theoretically save all of the world's data in one room.

It may seem like science fiction today, but the trend is clear. Ten years ago, we hadn't printed a single gene. Now, Twist can print nearly 10,000 on a single chip.

The ride might be bumpy for shareholders, but anyone visiting 2031 would likely see synthetic DNA playing an important role in multiple industries.

Pacific Biosciences, or PacBio as it's known, has been waiting for its day in the sun. Illumina has long dominated the genome-sequencing industry with more than 70% market share for its short-read methodology. The read length refers to the number of base pairs from a DNA fragment that are sampled, and not many are necessary when searching for a single variant associated with a disease or detecting small genetic differences.

The more expensive long reads have been more applicable to complex genomic elements like a repeating pattern or structural variant. That's where PacBio comes in. Its long-read sequencing has a higher ratio of cost to throughput and requires more high-quality DNA, but it opens up areas impossible for the short-read approach to interpret.

That wasn't always considered necessary. As much as 98% of our DNA doesn't code for proteins. These "dark genes" were thought to be nonfunctioning evolutionary leftovers. Scientists are proving that theory wrong and they're using long-read sequencing to do it. In just one example, researchers published the full sequence of chromosome 8 -- including the dark genes -- in September and discovered a region that influences the severity of cystic fibrosis. The finding could transform the approach to treatment.

PacBio's technology could usher in a new age of genome research similar to the era Illumina kicked off 20 years ago, but it won't happen overnight. The next decade of discoveries may seem surprising on their own. Taken together, they'll give us a better understanding of the human genome and the novel ways humans can influence nature.

It's hard to predict the timing of scientific advances. For that reason, investors in PacBio are best served by ignoring the share price and letting the momentum of scientific progress take over.

As the days go by

True technological innovation takes time, even when hindsight makes it seem like something happened all at once. It's hard to pinpoint exactly when mobile gaming, cloud computing, or streaming video and music became the norm, but they did.

For synthetic DNA and long-read genome sequencing, that day will come. Scientific progress is unpredictable in the short term, but inevitable over decades. If Twist and PacBio remain atop their industries, they could become synonymous with cutting-edge genetic research. That would mean massive returns for investors willing to ignore the month-to-month noise and buy and hold shares for a decade or more.

Why Pacific Biosciences of California Stock Is Down Today