COVID-19 vaccines, cancer immunotherapies, glucose monitors, and pacemakers -- what do these have in common? All were developed by life sciences companies, many of which have achieved tremendous scientific breakthroughs. Life sciences companies also have made many shareholders wealthy along the way.

A look at the life sciences industry

Such a broad definition means that a wide range of companies fits into the life sciences category. These companies develop and market products including:

Because of the diversity of companies in the life sciences industry, the size of the total market is not well-defined. The value of the global pharmaceutical market alone tops $1.3 trillion, and the worldwide market for life sciences tools alone (including chemical reagents and instruments) is valued at roughly $50 billion. 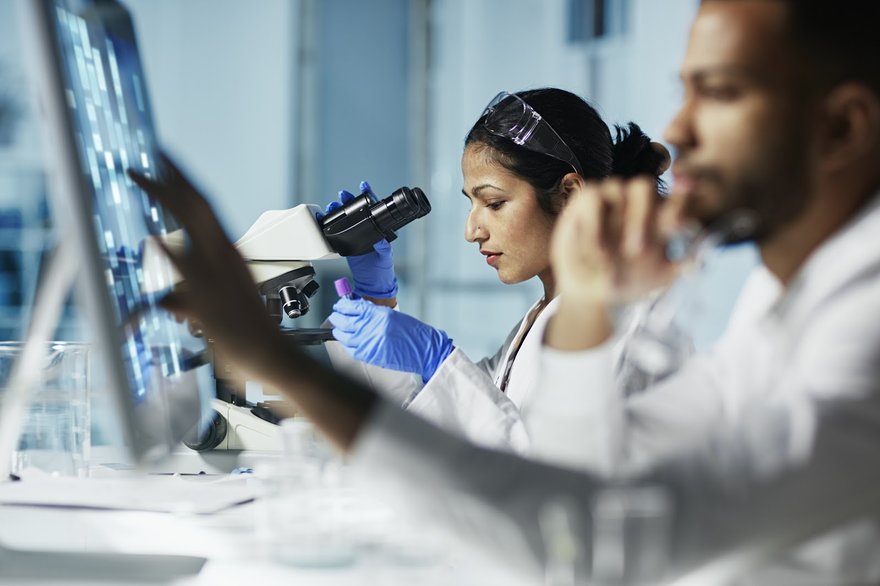 Life sciences stocks can generate fantastic long-term returns. These five large-cap stocks in the industry are worth watching:

A key growth driver for Abbott is its FreeStyle Libre continuous glucose monitoring (CGM) system. New versions of the CGM device are proving to be tremendously popular with individuals seeking to better manage their diabetes. Abbott also has several other products in its lineup that are enjoying solid sales momentum such as its MitraClip heart valve devices.

Abbott's COVID-19 diagnostic tests have become another important part of the company’s business. Although testing volumes can be expected to decline at some point, the emergence of new coronavirus strains could boost future demand.

Income investors especially like Abbott, which is a Dividend King. The company has paid a dividend every quarter since 1924 and has increased its dividend for 50 consecutive years.

Intuitive Surgical pioneered the robotic surgical systems market more than two decades ago. Its da Vinci systems have been used in more than 10 million procedures so far. More than 6,500 of the systems are installed across the globe.

Aging demographic trends should serve as a significant tailwind for Intuitive in the coming years as the baby boom generation requires more surgeries.

An even more important growth driver for Intuitive Surgical, though, is innovation. The company believes that new systems in development and regulatory clearances potentially on the way could increase its addressable market for soft-tissue surgeries from around 6 million procedures per year to almost 20 million.

Intuitive faces more competition now than it has in the past. Big companies, including Johnson & Johnson, Medtronic (NYSE:MDT), and Stryker (NYSE:SYK), have entered the robotic surgical systems market, as have smaller companies such as Asensus Surgical (NYSEMKT:ASXC), Globus Medical (NYSE:GMED), and Titan Medical (NASDAQ:TMDI). However, Intuitive’s big head start and extensive track record of success should give the company a significant competitive advantage over its rivals.

There’s arguably no better bellwether in the healthcare sector than Johnson & Johnson, which is the biggest life sciences company in the world. J&J’s products include well-known consumer brands such as Band-Aid and Tylenol. It also sells pharmaceuticals, including the cancer drug Imbruvica and the anti-inflammatory drug Stelara. In addition, the company markets a wide range of medical devices.

J&J’s business will change significantly in the not-too-distant future. The company plans to spin off its consumer health unit by November 2023. This move will position the company to deliver stronger growth with its pharmaceutical and medical device segments. Prostate cancer drug Darzalex, psoriasis and psoriatic arthritis drug Tremfya, and pulmonary hypertension drug Opsumit stand out as especially important growth drivers for the company.

Johnson & Johnson’s COVID-19 vaccine has been proven to be effective with just a single shot, while other leading vaccines require two doses. However, manufacturing issues have hindered the company’s ability to deliver enough doses for its vaccine to be a major commercial success.

Like Abbott, Johnson & Johnson is a Dividend King, having increased its dividend for 59 years in a row.

Moderna vaulted onto the world stage in 2020 by its rapid progress in developing a COVID-19 vaccine. In December 2020, the biotech company’s COVID-19 vaccine mRNA-1273 became the second to win emergency use authorization in the U.S.

The company has secured major supply deals for mRNA-1273 with countries around the world, with the U.S. government alone committing to purchasing 500 million doses in 2021 and early 2022.

Moderna is set to collect at least $17 billion in sales from mRNA-1273 in 2022. However, it’s uncertain how strong the revenue for its vaccine will be beyond this year.

Trikafta/Kaftrio quickly became a huge commercial success in the U.S. after its launch in late 2019. Vertex won European approval for the drug in August 2020. The company is likely to enjoy steady sales growth as it launches this newest CF drug in Europe.

Vertex and its partner CRISPR Therapeutics (NASDAQ:CRSP) are also evaluating an experimental gene-editing cell therapy called CTX001, which is currently in clinical trials for treating the rare blood disorders beta-thalassemia and sickle cell disease. The companies expect to file for regulatory approvals of CTX001 in late 2022.

Life sciences stocks can be highly risky investments since the path to regulatory approval or clearance is uncertain. Clinical tests of drugs can end in failure, especially in early-stage studies. And, even if clinical testing seems to go well, regulatory agencies may find reasons not to approve a product.

Even when a product does make it to market, it’s not always a commercial success. Many life sciences companies must be reimbursed by governments and private payers, which can be time-consuming and challenging. Rival companies that develop better products can capture substantial market share.

Some life sciences products can make billions of dollars each year. At the same time, aging populations across the globe are driving the growth of practically every part of the life sciences industry. Many investors are taking a favorable view of the risk-reward profiles of top life sciences companies.

Industries That Thrive During Recessions

Beginner's Guide to Investing in Stocks