The upper echelon of the Canadian banking sector doesn't get anywhere near as much attention as its much-larger U.S. counterpart. But most of the "big five" north-of-the-border incumbents are not only dominant players in their market -- they are also busy making coin in the U.S. 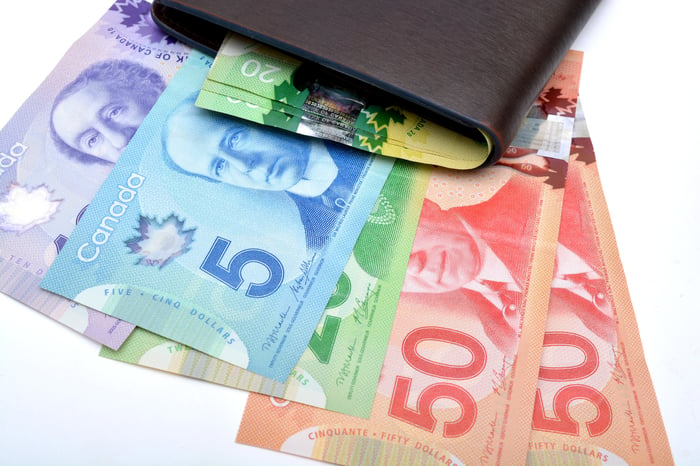 These days, despite the name, Bank of Montreal is headquartered in Toronto, Canada's financial capital. It does plenty of business in Canada's huge neighbor to the south, though; beginning in 1984 with the acquisition of old-line Chicago lender Harris Bank (now known as BMO Harris), the company has built a set of American assets.

And the company's south-of-the-border personal and commercial (P&C) banking operations are sizable and growing. In its fiscal 2017 earnings digest, the bank revealed that they rose by 13% over the preceding two years, and contributed 1.4 billion Canadian dollars ($1.1 billion) to overall company earnings, or 25% of the total.

The numbers were even better in Bank of Montreal's recently announced Q1 results: In U.S.-dollar terms, total revenue rose by 11% over the same period the previous year, to $941 million. Adjusted net profit growth was a very vibrant 30%. This made up for the sluggishness of its Canadian P&C unit, which saw its performance in the two metrics slump by 2% and 13%, respectively, during the quarter.

This illustrates one of Bank of Montreal's strengths, which buy-and-hold investors, in particular, might appreciate. The company has five operating segments -- Canadian P&C, U.S. P&C, wealth management (like U.S. P&C, a standout performer in Q1), capital markets, and corporate services. If we strip out the small and not-very-significant corporate services, we see that none of the four remaining segments is overwhelmingly larger than the others.

So the company can draw from four big and distinctive sources of growth. In Q1, all contributed between roughly CA$1.1 billion and CA$1.9 billion to total revenue. Collectively, they brought in almost CA$5.7 billion for Bank of Montreal, a 5% improvement on a year-over-year basis.

In addition to being one of the oldest financial institutions in North America-- it was founded in 1817 -- Bank of Montreal is also Canada's oldest dividend payer. Incredibly, it made its first shareholder distribution in 1829; these days, it pays a quarterly distribution of CA$0.93 ($0.72) per share.

At the current exchange rate, that yields 3.9% on the company's stock. That's more or less in line with the other Canadian big five (Toronto-Dominion's is 3.6%, for example), yet it's well above the rates of its U.S. Big Four peers, and those of plenty of regional American banks.

Another plus: In spite of the elevated yield, the company's payout ratio is 44%, indicating there's plenty of room for increases in the future.

Pumping out the profits

It's a good time to be a bank in North America; both the U.S. and Canada are doing fine economically, and the up cycle is having positive effects on the finance industry. Also, recent increases in the price of oil portend well for the resource-heavy Canadian economy, and by extension its banking sector.

Similarly, a recent decision by the World Bank not to invest in upstream oil and gas projects in the developing world could present opportunities for active Canadian lenders like Bank of Montreal.

This potential isn't reflected in share-price performance; investors have lately bid up top U.S. banking stocks, which post much-bigger numbers and grab most of the headlines. Compare the one-year performance of the Yankee Big Four (save for flailing Wells Fargo) with Canada's top five: 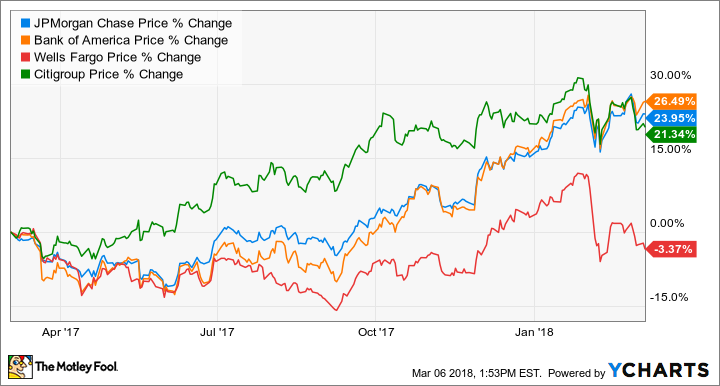 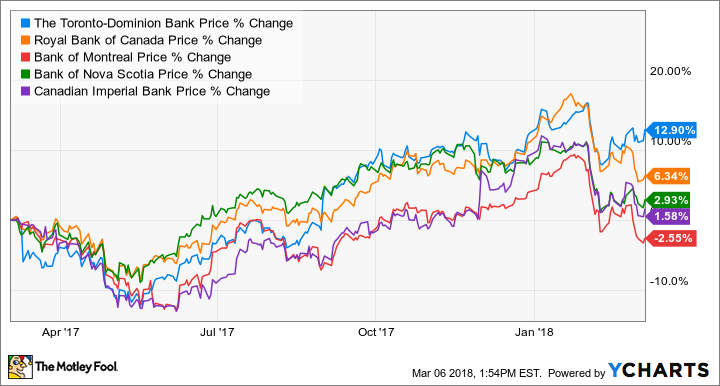 In short, Bank of Montreal is a steady operator, with fingers in enough pies to continue growing. That dividend is quite generous, too. The bank operates in a corner of North American finance that many investors are ignoring just now, which is why this might be a good time to snap up some shares.