Napoleon at the Battle of Wagram (1809), painted by Horace Vernet.

There are multiple publicly traded companies that have paid dividends since the 1860s or earlier. Seven of them are banks; the remaining two are utilities.

For all the attention paid to the Dividend Aristocrats, companies that have raised their quarterly payouts annually for at least 25 years, the companies above represent the most distinguished collection of dividend stocks of all time.

It isn't a coincidence that most of these stocks are banks. I say that because any bank that has passed the test of time, as these all have, appreciates the need to distribute its earnings to shareholders as opposed to retaining the capital on its balance sheets. Doing the latter reduces a bank's return on equity, as retained earnings is a component of shareholders' equity, which, in turn, serves as the denominator in the return-on-equity calculation.

One thing that surprised me is the number of Canadian banks that made the list, including Bank of Montreal, Bank of Nova Scotia, and Toronto-Dominion Bank. This is one reason why Toronto-Dominion is my colleague Matthew Frankel's single-largest bank holding right now. As he explained in a recent piece on the top bank stocks to buy in 2016:

TD Bank has grown its dividend at an average annualized rate of 12%. And it has a solid history of outperformance -- during the past decade, the bank has averaged a total return of 10.6% per year as compared with just 3.9% for the overall North American banking industry.

I like TD Bank because I believe that it has tremendous growth opportunities in the U.S., and that its focus on consumer banking will keep the growth going for years to come. TD is known as "America's Most Convenient Bank" with its reputation for excellent service, and its long branch hours (many TD branches are even open on Sundays). TD has been called the "best big bank in America" by Money magazine, and the "safest bank in North America" by Global Finance magazine.

I'm a firm believer that investing in well-run companies with quality products is the best way to go, and TD Bank is an excellent example of this.

One downside to relying on dividends from Canadian banks, however, is that their distributions are in Canadian dollars. When the U.S. dollar strengthens, as it has over the past few years, this decreases the currency-adjusted value of their dividends. You can see this in the chart below, which traces the dividends of the Bank of Montreal, Bank of Nova Scotia, and Toronto-Dominion Bank over the past decade, expressed in U.S. dollars. 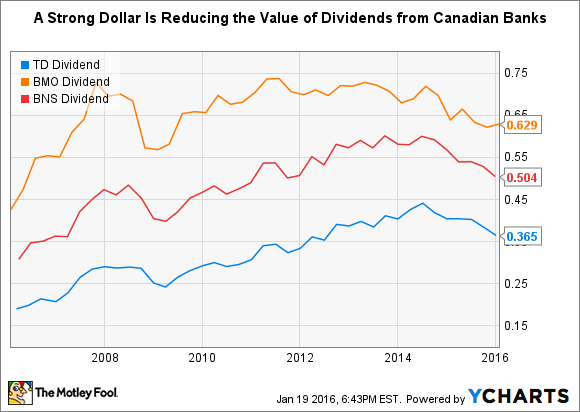 The flip side of this is that Canadian banks -- and its banking sector more generally -- are much more stable than ours in the United States. Charles Calomiris and Stephen Haber discuss this at length in their book Fragile By Design: The Political Origins of Banking Crises & Scarce Credit:

[T]he United States has had 14 banking crises over the past 180 years! Canada, which shares not only a 2,000-mile border with the United States but also a common culture and language, had only two brief and mild bank illiquidity crises during the same period, in 1837 and 1839, neither of which involved significant bank failures. Since that time, some Canadian banks have failed, but the country has been extraordinarily stable -- so stable, in fact, that there has been little need for government intervention in support of the banks since Canada became an independent country in 1867.

The added risk associated with currency fluctuations, in other words, is offset largely, if not completely, by the relative stability of our northern neighbor's banking sector. Suffice it to say that this offers more insight into why my colleague Matt has long been such an ardent supporter of Toronto-Dominion Bank, in particular.