The banking sector has some pretty attractive stocks as we head into 2016. Here are five of our favorites.

Many investors are hesitant to get involved with bank stocks, and understandably so. The financial crisis of 2008 hit banking investors hard, and that's tough to forget. However, we believe that there are some great opportunities in the banking sector that could produce excellent returns while allowing you to sleep soundly at night. We asked five of our contributors for their favorite bank stocks for 2016, and here is what they had to say.

Eric Volkman: Any business dreams of being top-dog in a lucrative market. Say hello to Silicon Valley Financial Group (SIVB), operator of Silicon Valley Bank. As the name implies, it's the go-to lender for the tech sector clustered in and around the eponymous region.

That's a choice location from which to operate, and not only because there are many young companies in the area hungry for capital. After all, the venture-capital operators and other investors who like to plow money into such companies also require products and services provided by Silicon Valley Financial.

Sure, the bank is very heavily exposed to one sector of the economy... but what a sector. Even if venture capital activity slows, or investor sentiment drifts into other types of companies, Silicon Valley (the region) will likely always be home to ambitious tech enterprises. They, and their partners, will continue to need help getting and keeping their finances in shape.

Over its history, Silicon Valley Financial has proven itself adept at growing the take from both traditional lending, and fees from its services. It's a smart company located dead in the middle of a great economic niche, and it should continue to benefit from this enviable position.

Matt Frankel: One bank stock to consider in 2016 is Canada-based Toronto-Dominion Bank (TD), more commonly known as TD Bank, the fifth-largest North American bank in terms of assets. There are several reasons to like TD Bank.

For example, TD Bank has grown its dividend at an average annualized rate of 12%. And it has a solid history of outperformance -- during the past decade, the bank has averaged a total return of 10.6% per year as compared with just 3.9% for the overall North American banking industry.

I like TD Bank because I believe that it has tremendous growth opportunities in the U.S., and that its focus on consumer banking will keep the growth going for years to come. TD is known as "America's Most Convenient Bank" with its reputation for excellent service, and its long branch hours (many TD branches are even open on Sundays). TD has been called the "best big bank in America" by Money magazine, and the "safest bank in North America" by Global Finance magazine.

I'm a firm believer that investing in well-run companies with quality products is the best way to go, and TD Bank is an excellent example of this.

Jason Hall: I admit I'm going out on a limb with this one. On one hand, BofI Holding (AX) -- the holding company behind Bank of Internet -- has huge potential, and has absolutely been a growth machine and a tremendous investment over the past several years: 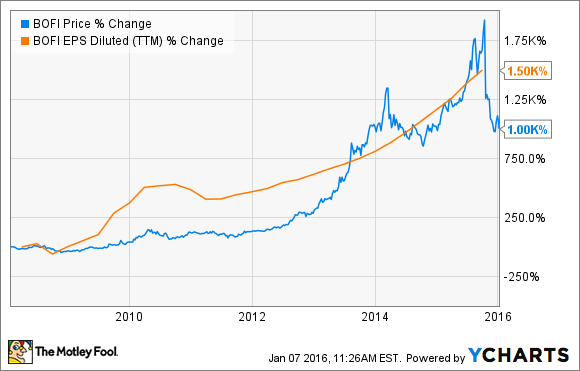 On the other hand, BofI Holding's stock price has plummeted since last fall, losing nearly half its value after accusations of impropriety and illegal behavior by insiders, particularly executives, including allegations made by a former employee in a lawsuit against the company.

Most of the accusations have been already proven baseless and false, but it's become a bit of a story that won't die as short-sellers continue to launch attacks on the bank. They have been largely dubious in nature, and have built on attempts to discredit executives, independent directors, and members of its audit committee -- not any real smoking gun or indisputable evidence of wrongdoing.

Furthermore, BofI has faced regulatory scrutiny over the past year, and regulators have found nothing. I may be naive, but that counts for more to me than unsubstantiated claims made by anonymous short-sellers.

BofI Holding is one of the best-performing banks out there, with one of the best efficiency ratios, and one of the lowest levels of loan losses in the industry. Factor in its still-tiny size, and what may be an easier path to growth as a web-based bank, and the market's reaction to the short attack and accusations have made it an incredibly attractive bank to buy at these levels.

Higher risk? Yes. But even bigger upside once the bank moves past the accusations.

Since paying back its TARP money, Wells Fargo has been able to restore its dividend, which is now actually higher than before the financial crisis. Its 2.8% current yield won't set the world on fire, but its 35% payout ratio does indicate that Wells Fargo will likely have the opportunity to continue increasing that dividend in 2016.

Additionally, while Wells Fargo's shares have recovered from the lows reached during the financial crisis, it's trading at around 12 times estimated trailing earnings and 1.5 times its book value. Those aren't dirt-cheap metrics, but they do indicate that current buyers would be getting a reasonable valuation for their shares. In a still-uncertain economy, Wells Fargo's combination of operational strength and reasonable valuation make it a bank stock worth buying in 2016.

Selena Maranjian: A top bank to consider buying into in 2016 is the Bank of Nova Scotia (BNS) -- known also as Scotiabank -- which recently sported a market valuation of $47 billion, and a hefty dividend yield of about 6%. You may not be familiar with it, but it traces its roots back to 1832, and currently serves around 23 million customers in more than 50 nations in North America, Latin America, the Caribbean, Central America, and Asia. Its products and services range from personal and commercial banking, wealth management and private banking to corporate and investment banking, and capital markets.

Its geographic and operation diversification are advantages, making it less dependent on any one region or business line. Many countries outside North America have economies growing more briskly, giving Scotiabank a boost, and management is looking at international markets to drive further growth.

Scotiabank has been performing well lately, and expanding -- recently in Central America and the Caribbean. In its fourth quarter of 2015, it posted year-over-year adjusted revenue and net income growth of 5% and 8%, respectively. Expenses rose by about 4%, but that was largely due to unfavorable currency-exchange rates that may be fleeting, and investments in technology that can better serve its customers. Scotiabank's Canadian Banking segment showed strength, with its net income growing by 19%, and business loans also grew briskly -- though much of the bank's portfolio is residential mortgages.

Scotiabank has solid credit quality, with ratings of Aa2 from Moody's and A+ from Standard & Poor's. It rewards shareholders with a generous dividend, and has been buying back shares, too. Give it some consideration for your portfolio.

The Bank of Nova Scotia
BNS