Please ensure Javascript is enabled for purposes of website accessibility
Log In Help Join The Motley Fool
Free Article Join Over 1 Million Premium Members And Get More In-Depth Stock Guidance and Research
By John Rosevear – Apr 4, 2018 at 11:02AM

Should investors really be encouraged?

Tesla (TSLA -3.46%) said on Tuesday that it made 2,020 Model 3 sedans in the last week of the first quarter, falling well short of the guidance it gave in February.

But despite the miss, Tesla's share price jumped almost 6% on the news, closing at $267.53, probably because of a surprise buried below the headlines. 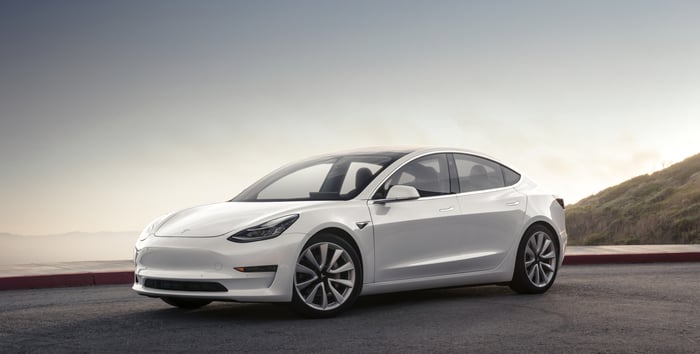 Will Tesla need to raise cash to get its Model 3 production line up to full speed? Image source: Tesla, Inc.

After a month of bad news, the report held few surprises

To be fair, Tesla's guidance miss wasn't unexpected. In fact, with one exception, Tesla's production and deliveries report didn't really say anything that was unexpected. And it answered one looming question: Is Tesla still aiming for a production rate of 5,000 a week by the end of June? (Tesla backed away a bit from the last-week-of-June commitment, but confirmed that it expects to get to that rate around that time.)

An ongoing effort by Bloomberg to track production of the Model 3 had shown its production rate to be well short of guidance for most of March (and the quarter), but there were reasons to think that the very last week of March had been a strong one.

When Tesla confirmed on Tuesday that it had managed to just break 2,000 in the last week of March, with what was reportedly an all-out effort with extra workers borrowed from the Model S and X lines, it seemed like old news.

That was probably enough to give Tesla bulls some encouragement, because good news (or even good-enough news) has been scarce for Tesla lately. The stock fell over 22% in March, and another 5.1% on Monday, on a growing list of concerns. 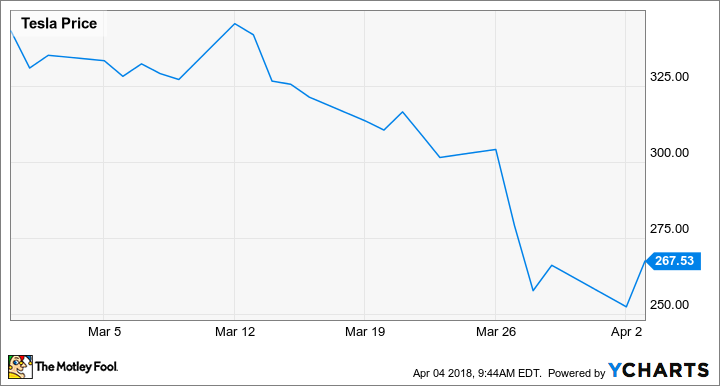 Among those concerns: Last week, Moody's Investors Service dropped Tesla's corporate credit rating from B3 to B2, with a negative outlook -- and dropped its rating on Tesla's senior notes, due in 2025, from B3 to Caa1, a speculative, deep-junk level.

That raises the real fear, beyond production rates or sales: Tesla may be close to a cash crunch.

The looming question: Will Tesla need yet another infusion of cash?

The Moody's downgrade amplified growing concerns about Tesla's high cash-burn rate and its $10 billion debt load. The company reported negative cash flow of $3.5 billion in 2017, most of that due to capital expenditures. It had $3.37 billion in cash remaining as of the end of 2017, and it has guided to slightly higher capital expenditures in 2018. It also has $1.2 billion in convertible bonds maturing in November 2018 and March 2019.

Add those numbers up and it's hard to avoid the conclusion that Tesla will have to raise more money, and soon. But the credit downgrade would make it a lot harder to place a debt issue without offering an exorbitant interest rate, and the fall in Tesla's stock price makes an equity issue less appealing.

All of that raises a crucial question: How will CEO Elon Musk pull off what appears to be a much-needed cash infusion?

Apparently, the answer is that he won't.

Tesla said on Tuesday that because its production ramp-up remains broadly on track, it expects strong positive operating cash flow starting in the third quarter.

"As a result, Tesla does not require an equity or debt raise this year, apart from standard credit lines," the company said in its production announcement.

That might be why Tesla's stock jumped on Tuesday. If the company's prediction turns out to be true, Tesla's stock price might resume its upward march, in time.