Mounting debt has sent this dividend dynamo down 25% over the past year.

Enbridge (ENB 2.59%) has been under intense pressure over the past year. Its shares have tumbled more than 25% as investors began to feel unnerved by the debt the company took on to expand. It's working to lift this weight, most recently by hiring advisors to sell some assets.

The Canadian energy infrastructure behemoth has added billions of dollars of debt to its balance sheet to expand its empire in recent years. The biggest chunk came early last year when the company closed its $28 billion purchase of Spectra Energy. While that deal created the largest energy infrastructure company in North America, it saddled Enbridge with another $14.5 billion in debt. 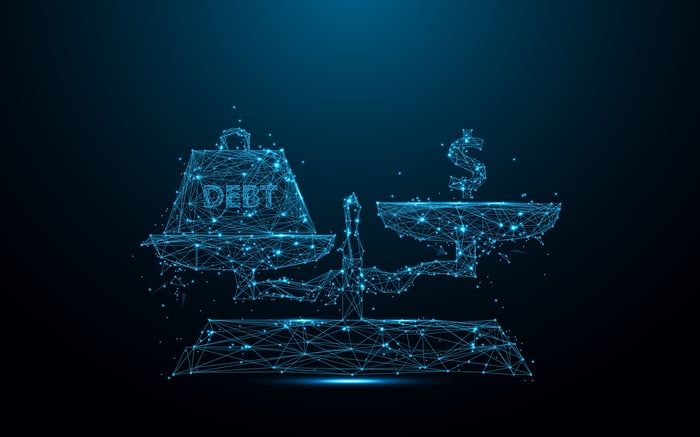 Enbridge currently has too much debt weighing it down. Image source: Getty Images.

The company continued borrowing money last year to finance its massive backlog of expansion projects. Overall, it raised 14 billion Canadian dollars ($10.9 billion) of capital to finish funding the CA$12 billion ($9.4 billion) of projects it completed last year and begin financing the CA$22 billion ($17.1 billion) still underway. Of that capital, only about CA$5 billion ($3.9 billion) was equity or an equity equivalent such as preferred shares.

Enbridge initially expected that it would grow into its balance sheet as these expansion projects come on line. Under the company's initial assumptions upon purchasing Spectra, it anticipated that leverage would fall from a troubling 6.2 times debt to EBITDA in 2016 to 4.3 times by 2019, which would put it comfortably below its 5.0 times target. However, with interest rates rising, investors and analysts are less comfortable with where leverage is right now and want the company to speed up the process. Those concerns have only increased since credit rating agency Moody's downgraded Enbridge's credit rating last December, putting it just two notches from junk territory on worries that the company wouldn't improve its financial profile fast enough.

These worries led Enbridge to announce steps to speed up its deleveraging plans. It now intends to sell up to CA$3 billion ($2.3 billion) in assets this year and has identified as much as CA$10 billion ($7.8 billion) of noncore assets that it could sell in the future. This year's sales would get leverage to its target level of 5.0 times by year-end, with that number trending down toward 4.5 times by 2020. The company recently took its first step in that direction by hiring financial advisors to help it sell its Canadian gathering and processing assets, which it acquired along with Spectra. That package alone could fetch more than CA$2 billion ($1.6 billion). In addition to that sale, Enbridge is also likely to monetize some of its onshore renewable assets this year to hit its target.

While Enbridge believes the CA$3 billion ($2.3 billion) in asset sales planned for this year will be enough, the market seems to want even more so the company can get leverage below its target level even quicker. If shares continue to slip, it wouldn't be a surprise to see it selling more noncore assets this year if it can do so at an attractive price.

Enbridge's stock slide over the past year has pushed its dividend yield up to more than 7%. That's an increasingly attractive level for a company that has raised its payout 23 straight years and has the expansion projects in progress to increase it at a 10% annual pace through 2020. While the current debt level is a concern, it's heading in the right direction and should continue improving over the next year. Because of that, Enbridge looks like an even more compelling opportunity for income seekers who are in it for the long haul.