The chip giant now culls half of its quarterly sales from its "data-centric" operations, up from 46% a year ago.

Semiconductor titan Intel (INTC -1.96%) hit the newswires with a fresh first-quarter report Thursday evening. The company smashed its own quarterly guidance targets with ease, then raised its targets for the full year.

That's the bird's-eye view of Intel's latest business report. Here's a much closer look at the same period.

As a reminder, Intel expected to reach top-line revenues of roughly $15 billion, while GAAP earnings were expected to stop at $0.65 per share. As it turns out, those targets were on the conservative side.

What happened with Intel this quarter?

Year-over-year revenue growth would have reached 13% if you back out the McAfee security division from the year-ago period's numbers. Intel sold that business to a consortium of private investment firms in the spring of 2017, so this should be the last quarterly report to include adjusted figures to account for that move.

What Intel calls PC-centric products accounted for roughly half of the company's total sales in the quarter, a 3% year-over-year increase. The other half, which Intel refers to as data-centric operations, saw revenues rise 25% overall.

Within the data-oriented package, data center products led the way with a 24% top-line boost, to $5.2 billion. Non-volatile memory sales also broke the 20% growth level, while increases in the remaining two subdivisions -- Internet of Things and programmable solutions -- stopped at 17% each. Management lauded the Xeon Scalable product line above all else, noting that these chips are popular for artificial-intelligence workloads. 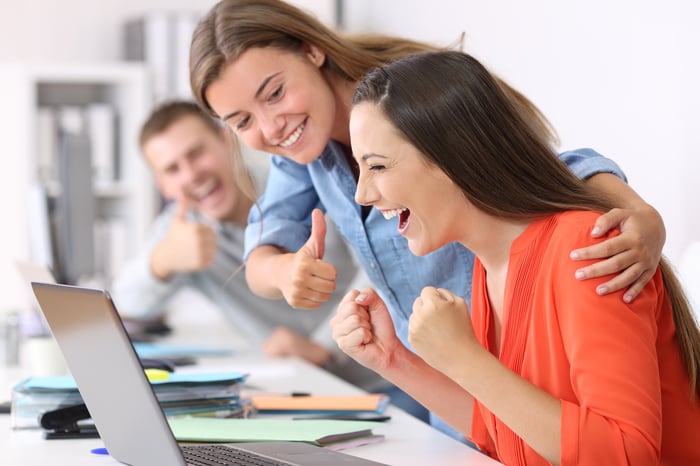 In a prepared statement, Intel CEO Brian Krzanich highlighted the growth trajectory of data-centric operations, but also noted that the PC-related business is executing nicely. "The strength of Intel's business underscores my confidence in our strategy and the unrelenting demand for compute performance fueled by the growth of data," Krzanich said.

CFO Bob Swan doubled down on praising the data-centric strategy's growth before moving on to a boosted slate of full-year guidance targets.

For the full fiscal year of 2018, Intel now expects top-line revenues near $67.5 billion, with GAAP earnings near $3.79 per share. Compared to the original guidance given three months ago, that's a $2.5 billion lift to the revenue goal and a 14% jump for the bottom-line target.

Zooming in on the second quarter, Intel sees revenues shaping up to roughly $16.3 billion and earnings should come in near $0.85 per share. Hitting these targets on the nose would work out to a 10% year-over-year revenue boost and 18% stronger earnings.

In broader strokes, Intel sees cloud computing as the beating heart of its long-term growth strategy. Programmable solutions and automotive computing may carry significant value several years down the road, but these smaller operations have a lot of growing up to do before they can add game-changing business value.