Please ensure Javascript is enabled for purposes of website accessibility
Log In Help Join The Motley Fool
Free Article Join Over 1 Million Premium Members And Get More In-Depth Stock Guidance and Research
By Rich Smith - May 4, 2018 at 11:38AM

Shares of Century Aluminum (CENX 0.51%) are off 9.7% as of 11 a.m. EDT despite the company reporting a sizable earnings "beat" this morning. Instead of posting expected pro forma losses of $0.23 per share for its fiscal first-quarter 2018, its loss for the quarter was less than $0.01 per share ($0.04 after adjusting for one-time items).

Sales, which were predicted at $443.4 million, likewise came in ahead of estimates at $454.5 million. 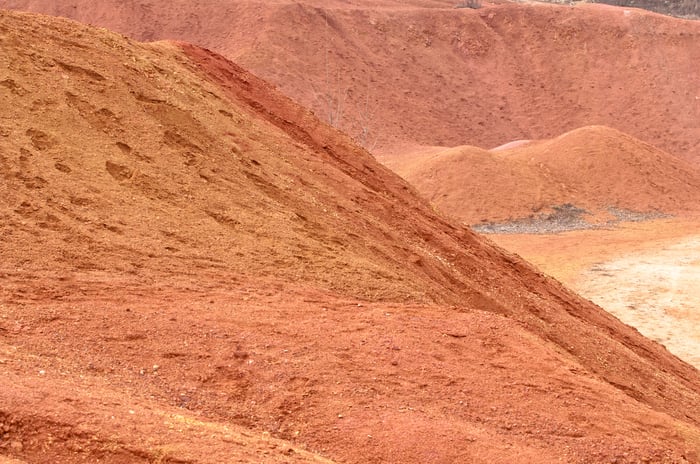 Before aluminum gets refined and all shiny-looking, it looks like this -- and Century investors don't like the look of high alumina prices. Image source: Getty Images.

CEO Michael Bless commented that "industry fundamentals remain generally strong, with attractive demand growth persisting in most global regions." So why is Century Aluminum stock down, not up? Well, let's not lose sight of the fact that Century Aluminum did lose money. That's not what investors ordinarily like to see from the companies they invest in.

Also, while sales were ahead of estimates, and up 5% year over year, the volume of aluminum that Century shipped was actually down 1%, indicating weakening demand.

If I had to guess, though, I'd say the best explanation for today's negative reaction to a largely positive earnings report is Bless' observation that "the alumina index price, which had fallen to normalized levels by early 2018 as we expected, briefly jumped to an all-time high," which "more than offset the increase in the metal price over the same period," resulting in Century Aluminum booking a loss for the quarter.

Management opines that "this environment can [not] persist" and says it has "already seen the alumina price begin to fall." Still, the risk of high input costs robbing Century Aluminum of the profits it might otherwise expect to enjoy from high output prices on aluminum is a worry.

Today, it's a concern investors are taking to heart.