Boeing's proposed acquisition of a majority stake in Embraer's commercial aviation business is being held up by some thorny issues, but it is still likely to be finalized within the next few quarters.

Shares of Brazilian aerospace company Embraer (ERJ -0.83%) surged in late 2017 after Boeing (BA 0.02%) confirmed its interest in buying its smaller rival. However, Embraer stock has retreated in recent weeks, based on reports that negotiators for the two companies are having trouble agreeing on the finer points of a deal.

The underlying problem is that the Brazilian government has blocked an outright takeover of Embraer. This has forced Boeing and Embraer to devise a more complicated structure that entails disentangling the latter's commercial aviation business from its defense business. Still, there is no reason why these issues should torpedo a deal, even if they delay its consummation.

A joint venture is the current plan

Whereas Boeing had hoped to buy all of Embraer, the deal structure now being considered would involve Embraer creating a separate company to hold its commercial aviation business. Boeing would pay cash for a roughly 80% stake in that new company. Embraer would retain the other 20% as well as its executive jet and defense segments. (In another potential version of this plan, Embraer's executive jet division would be included in the new company to be formed.) This type of arrangement would satisfy the Brazilian government, which wants to maintain local control of its defense programs. It would also meet Boeing's main objectives, which are to broaden its product lineup with a family of smaller jets and to refresh its ranks of engineers as it considers developing its first all-new jet in more than a decade.

However, there are also some technical challenges. First, the commercial aviation division is responsible for virtually all of Embraer's profit. Second, the various business units aren't completely separate from one another, particularly in terms of engineering resources.

A little more than a week ago, Brazil's new defense minister declared that he was certain that Boeing and Embraer would reach a deal before the end of this year. This caused Embraer stock to jump.

Yet just a few days later, Reuters reported that the two companies were having trouble moving past several sticking points. These issues included dividing Embraer's engineering workforce between the two companies, negotiating long-term service contracts between the various entities, and ensuring that what's left of Embraer has the financial strength to be successful.

The Reuters report suggested that while Boeing is interested in completing the proposed deal, it still doesn't see combining with Embraer as strategically vital. Not surprisingly, Embraer shares subsequently gave up all of the ground they had gained earlier in the week. 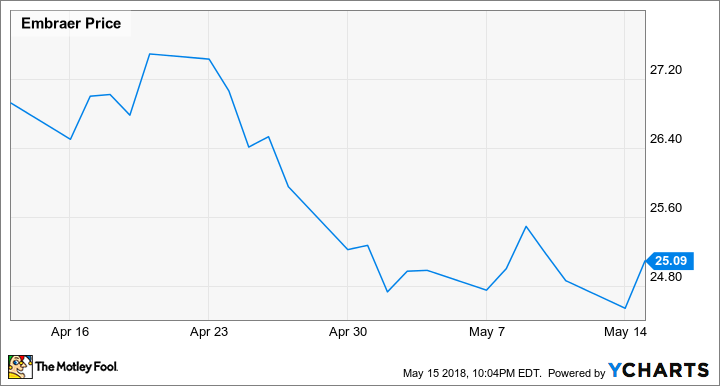 None of these issues is insurmountable

Given the complexity of the proposed Boeing-Embraer deal, it's not surprising that there have been some delays. On the other hand, while it may take a long time to hash out the details of the service contracts between Boeing, Embraer, and the third company, this issue doesn't seem like a potential deal breaker. The weak profitability of Embraer's executive jets and defense segments also shouldn't be a major obstacle, as both business units are on the mend after a few rough years.

The biggest challenge that Boeing and Embraer will have to sort out is the division of Embraer's engineering workforce. The companies need to carefully evaluate their future development programs. However, it's clear that most of the engineers should go with the commercial aviation division, as the executive jet and defense segments are both near the end of new product offensives and don't have much work in the pipeline.

Thus, Boeing and Embraer may have to address some tricky issues, but they are all solvable. Given the strong strategic rationale for the deal, Boeing is likely to complete its purchase of a majority stake in Embraer's commercial jet business within the next few quarters. This will likely lead to a nice windfall for Embraer shareholders.

Why Embraer Stock Is Up Today
397%