Please ensure Javascript is enabled for purposes of website accessibility
Log In Help Join The Motley Fool
Free Article Join Over 1 Million Premium Members And Get More In-Depth Stock Guidance and Research
By Adam Levine-Weinberg - May 5, 2018 at 2:15PM

Embraer may agree to sell 80% of its commercial aviation business to Boeing within the next few months. That could drive big gains for Embraer stock.

Last December, shares of Embraer (ERJ -1.86%) spiked following reports that it might sell itself to aerospace giant Boeing (BA -2.05%). Since then, the Brazilian government has ruled out a full takeover of Embraer but signaled its interest in facilitating a partnership between the two companies in the commercial aviation business.

Boeing, Embraer, and the Brazilian government still need to hash out details of the potential combination, but most sources indicate that the process is going well. This may lead to a formal offer from Boeing within the next few months. Selling a majority stake in its commercial aviation business would be a big win for Embraer and could send its stock even higher.

This isn't the CSeries

Last September, Bombardier (BDRBF 1.90%) handed a majority stake in its CSeries aircraft program to Airbus (EADSY -1.87%) in exchange for in-kind support. This deal was probably a big motivator for Boeing and Embraer to join forces, as Embraer's E2-series jets are direct competitors to the CS100 (and to a lesser extent, the larger CS300). However, while Bombardier practically gave away the CSeries, it was in a weak position for two reasons. First, it has had trouble selling the CSeries jets. Airbus brings a strong sales team to the program -- and its involvement will allay customers' concerns about Bombardier's stability. Second, as an all-new aircraft, the CSeries is expensive to build at the moment. Production costs will decline over time, but Airbus is in much better position to absorb near-term losses than Bombardier.

By contrast, Embraer's commercial aviation business is much stronger. While its E2-series jets don't quite match up to the CSeries jets in some aspects of performance, they were developed at a fraction of the cost. Furthermore, since the E2-series jets are derived from the E-Jets that Embraer has been building for more than a decade, they are already relatively cheap to produce. This makes Embraer's commercial aviation business far more valuable than the CSeries program.

Under the most recent proposals being discussed by Boeing and Embraer, Boeing would pay cash for a roughly 80% stake in Embraer's commercial aviation business. Since Embraer reports some statistics on the financial performance of its commercial aviation segment, it's possible to estimate how much Boeing might pay.

Last year, the commercial aviation segment generated revenue of $3.37 billion. Its segment margin was 13.5%, which implies that segment operating income was around $455 million. 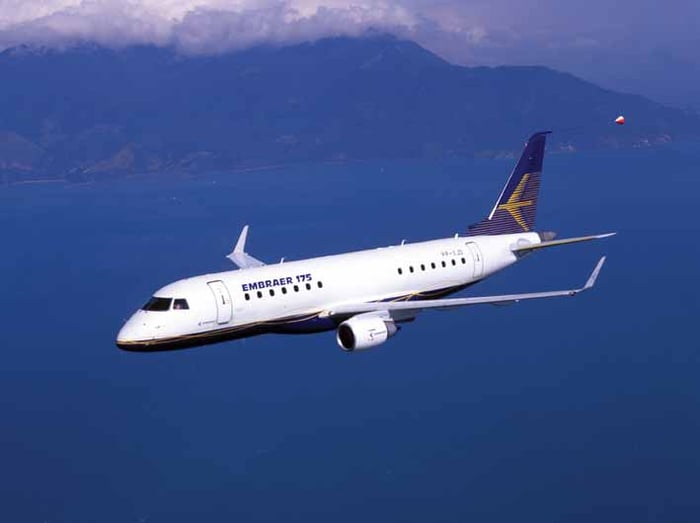 Two major aerospace industry acquisitions announced in the last year have been priced at around 14 times adjusted EBITDA. That would imply a valuation of more than $8 billion for Embraer's commercial aviation business. The valuation multiple might be somewhat lower in this case as Boeing won't own 100% of the business, but even a $6 billion-$7 billion valuation would be a good deal for Embraer shareholders.

Assuming a $6.5 billion valuation, Embraer would receive about $5.2 billion of cash. That's nearly equal to its entire enterprise value. Thus, shareholders would be getting the other 20% of the commercial aviation business -- along with the defense and executive jet segments and the associated portion of Embraer's services business -- for free.

Embraer's other business lines are recovering

Of course, the valuation of the rest of Embraer depends heavily on how the executive jet and defense segments perform. Recently, these parts of the business have been losing money. However, performance is finally improving.

For example, the defense segment earned a 4% margin last quarter, as Embraer made progress on its KC-390 tanker/transport program. It will deliver the first two KC-390s to the Brazilian Air Force later this year, with at least three more deliveries planned for 2019. As KC-390 production ramps up over the next few years -- along with other defense projects Embraer is working on -- revenue and earnings for the defense segment are likely to rise considerably.

Meanwhile, conditions are finally improving in the executive jet market. A glut of used business jets is finally subsiding, helping Embraer achieve modest pricing improvements. This underpins the company's forecast for a return to profitability in the executive jet segment this year.

The nearly simultaneous turnarounds of the executive jet and defense segments should allow Embraer to prosper even without its valuable commercial aviation business. This means that Embraer stock could be worth more than $30 if the company manages to finalize a commercial airplanes joint venture with Boeing.