Six years ago, I wrote about a company I called "my highest-conviction stock in the market." That stock was Amazon (NASDAQ:AMZN), and since then, it has octupled -- returning 700% for investors. My reasoning was fairly simple:

Having streamlined, super-expensive [fulfillment] centers spread throughout the country ensures that when you order something from Amazon, it will get to you in just a few days ... If I were a bright entrepreneur, I would look for other ways to succeed outside taking on Amazon. The cost would be too high, and the probability of success too low.

I'm starting to see the very same dynamics play out in Chinese e-commerce specialist JD.com (NASDAQ:JD), and it's why I'll be buying more shares of the company when Motley Fool trading rules allow. 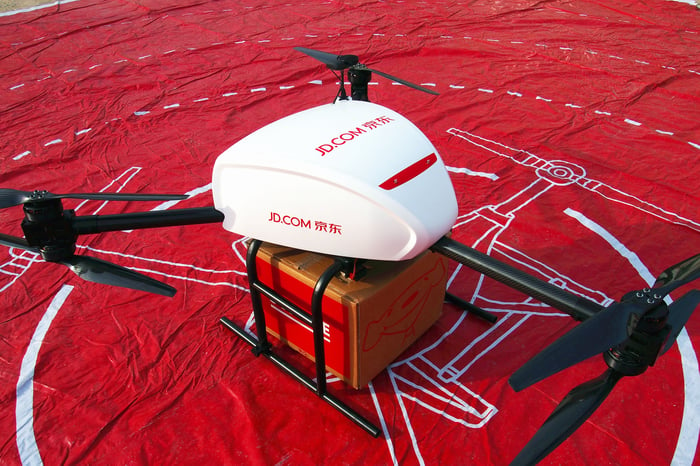 Of all the reasons to own shares of JD, none is more important to the company's moat -- and my investment thesis -- than this section of the company's annual report:

We operated a total of 486 warehouses...in 78 cities as of December 31, 2017, and our comprehensive fulfillment facilities covered almost all counties and districts across China as of the same date. We delivery a majority of the orders directly to customers.

This is a huge deal. Unlike a company relying solely on a network effect, which can switch from a virtuous to a vicious cycle one when it falls out a favor, or a brand whose value is often out of management's control, JD's key advantage is in the form of physical locations -- to a scale that is completely unmatched in the Middle Kingdom.

The real moat here is low-cost production: Because of its fulfillment network, JD can offer next- or two-day delivery for lower internal costs than anyone else. Not only does that engender customer loyalty, but it also helps guard against counterfeit goods -- a problem that is rife in China.

The biggest rivals aren't major threats to narrow this moat right now. Alibaba enjoys wide margins precisely because it does not have to worry about building and maintaining huge delivery networks -- though it is making moves in that direction. And Tencent -- the $500 billion social media and gaming giant -- has a history of working as partners with JD.

And JD is taking a page right out of the Amazon playbook. Last year, the company reworked its JD Plus premium membership program to include access to free e-books, special rebates, and...you guessed it...free shipping. It also recently threw in a premium membership to streaming giant iQiyi recently to sweeten the JD Plus benefits for members.

While we don't have specific numbers on membership in JD Plus, there's little reason to doubt that the benefits of the membership will continue to accrue, and could attract very sticky revenue over the long run.

The results are proving this out

Of course, there's nothing exciting about an impenetrable moat of fulfillment networks if nobody is actually buying anything on JD. That, however, is not a major problem for the company. Revenue, gross merchandise value -- or GMV, a measure of everything sold on the site, and annual active customers have all been growing at very healthy clips.

To put these numbers in perspective, the company's revenue over the past 12 months is equivalent to $60 billion, while GMV clocks in at $213 billion.

All of these forces combine to give JD four different moats, of varying strength:

A price to justify being greedy

Any student of Amazon stock history realizes a tension: The stock has never been "cheap" by traditional metrics. And yet, waiting for a good price has meant passing up incredible gains along the way.

On the face of it, JD appears to be pretty expensive, too. After changing the results into dollars, the company's non-GAAP P/E currently stands at 87 and the price-to-free-cash-flow sits at over 120. That's very expensive.

But JD is also aggressively investing in its future -- whether through improved logistics and fulfillment, or ancillary services. We got a peek into what might be possible when the company took its foot off of the spending pedal last year, when annual free cash flow peaked at $4.8 billion. Today's stock trades at a mere 13 times that figure -- a very cheap price tag relative to the company's growth.

And Alphabet -- parent company of Google -- also recognizes the tremendous opportunity here. The company announced this week that it was investing $550 million in JD. It's a win-win for both companies, as JD gets exposure to a world-leader in data and AI, while Alphabet can reestablish a presence in the Middle Kingdom after abandoning its search ambitions due to government restrictions.

Of course -- as with Amazon -- there's no telling if or when that free cash flow will balloon once again. But I'm putting my skin in the game so that I'll be owning shares when that does happen. If you're a growth investor with a long-term horizon, I suggest you consider doing the same.