Over the last few months, Skechers (NYSE:SKX) has managed to erase an entire year's worth of gains. Back in April, the stock was up about 50% year-over-year, but a couple of poor earnings reports have completely reversed the stock's trajectory.

The main reason? The shoemaker's expansion into China is costing some serious dough. 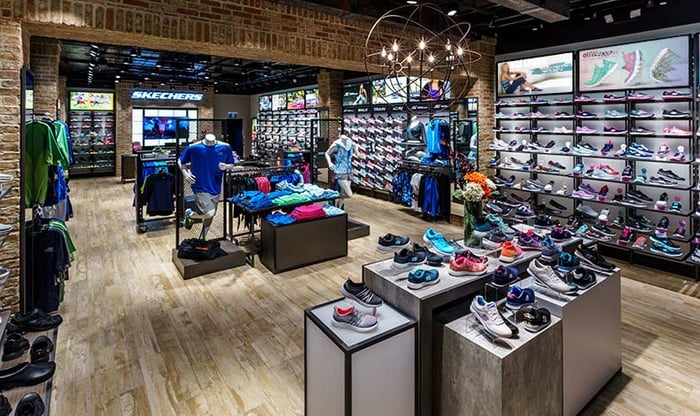 The only good news in the just-reported second quarter was in-line revenue growth of 10.6%. The bad news was that earnings per share fell 23.7% from the year-ago period, well short of management's guidance from a few months prior.

A lull in growth was to be expected this quarter, but Skechers had maintained things would pick up the second half of the year as a big shipment of international inventory was delayed until later this year. With management guiding for a best-case-scenario 12% sales increase in the third quarter, worries mounted that efforts to expand overseas are more costly than what they're worth.

What's so confounding about Skechers' dissipating bottom line is that international business -- which accounted for 51.6% of total sales in the second quarter -- increased 24.9% on the wholesale side and 12.8% on the retail side. China in particular continues to be a bright spot for the company with a 44.1% increase. However, overall expenses soared far beyond any of that impressive growth and is the primary cause of the bottom line drop.

First was general and administrative costs, which were up 19.7% from things like extra advertising and infrastructure build-out to support direct-to-consumer selling capabilities. In fact, $29.4 million of the total $65.6 million increase in general and administrative expense was attributable to China in support of expansion and the upcoming Single's Day holiday (Nov. 11, akin to Black Friday in the U.S.). A new distribution center there will break ground later this year.

Then there were taxes, coming in at a rate of nearly 19% compared with guidance for 12% to 17% for 2018. Management said to look for a full-year tax rate at or slightly above its previous guidance. Positive effects from U.S. tax reform passed in Dec. 2017 are still being worked out, but it would appear they won't be the boost originally envisioned. Plus, a potential wrinkle has emerged: trade wars and tariffs. While footwear hasn't been targeted yet, in answering a question from an analyst about potential tax changes, Skechers chief operating officer David Weinberg said about 60% of its products in the U.S. come from China.

And finally, an adverse currency exchange rate took a $7 million bite out of profits. The dollar has been strengthening against other currencies in recent months, including against the Chinese yuan. When companies like Skechers bring their income back home from overseas, a stronger dollar negatively impacts profitability.

Will China eventually pay off for Skechers?

For what it's worth, Skechers management still thinks growth will be strong during the back half of 2018. However, with expenses now easily outpacing top-line gains, I am eating some serious crow with Skechers stock. Sales growth momentum is decelerating, putting the benefits of expansion in emerging countries like China in question at the moment.

Growth is growth, though, so if management scales back its expenses, a bigger revenue figure will eventually yield bottom-line results. But it doesn't look like the executive team plans on doing that anytime soon. I still like Skechers' long-term prospects, but I'm putting the stock in the penalty box after this latest report.