Skechers (SKX 2.77%) reported a strong start to 2018, but shares fell sharply because of an uncertain outlook on profitability in the months ahead. Overall, the report card was good, though, as the shoemaker continues its global expansion. Here are three of the biggest highlights.

1. Skechers is more popular than ever

Skechers has revitalized its image in recent years, going from a discount shoe to a quality footwear contender to global giants like Nike and Adidas. The company still differs in its marketing, favoring lesser-known or retired athletes and pop icons -- like current campaigns with former NFL quarterback Tony Romo and singer Camila Cabello. It may seem quirky, but it's working, especially as retro looks and casual athletic wear have gone global. Those styles are right up Skechers' alley.

2. Skechers outside of America

Management said that domestic sales could slow again later this year as difficult comparable numbers from 2017 are lapped. International sales, on the other hand, are showing no signs of letting up and are still viewed as the best growth opportunity.

International wholesales grew 17.9%, and same-store sales overseas increased 17.6% in the retail segment. China continues to lead the way, reportedly growing over 30% and posting the highest increase in online activity of any geographic region. In total, Skechers outside of the U.S. now accounts for 54% of the company's total revenue.

Expansion is still the priority, with new retail stores and third-party licensed locations opening up. There are now about 2,200 locations outside the U.S. in operation, with more on the way in diverse markets from South America to Asia to the Middle East. A new distribution center for China is also in the works to keep up with the fast pace and unique logistics in that market. 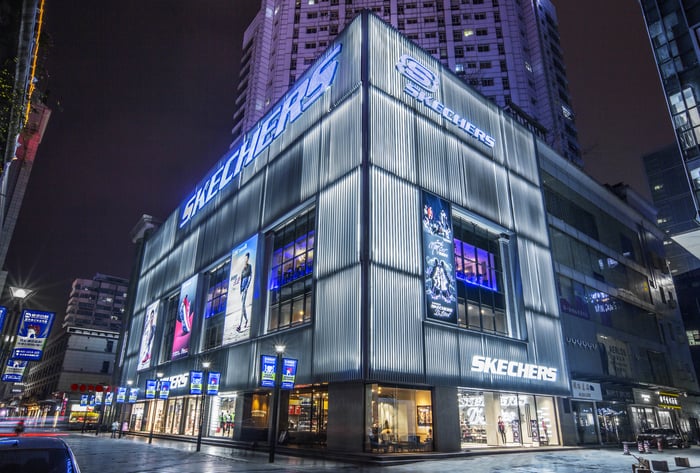 While earnings per share of $0.75 for the quarter were at the top of guidance, all that expansion comes at a cost. Investors chose to focus on the second-quarter outlook, where Skechers sees earnings coming in flat to 13% higher over the second quarter of 2017. That's in spite of an expected year-over-year revenue rise of 9% to 12%.

Some of the muted growth has to do with timing, both with the Easter holiday shifting from the second quarter last year to the first quarter this year, as well as product shipments to new business overseas getting pushed out to the second half of 2018. Rapid growth means costs rise, keeping a lid on the anticipated bottom line for now. However, the Skechers team is confident its international segment will maintain its current top-line growth trajectory.

And that's why the first-quarter report is still a good one, even if share prices indicate otherwise. Skechers is keeping its foot on the gas at the expense of short-term profitability to take advantage of the momentum it has been able to build, especially in overseas markets. It's all about sales growth, management says, as it makes a push for $6 billion in annual sales by 2020.

Also of note is the company's share repurchase program launched in February. It can buy another $147 million of its stock, and management said on the earnings call it will continue to make purchases because it sees its own stock as a good use of cash. Considering the sell-off that just happened, now might be a good time for long-term Skechers investors to consider doing the same.