T-Mobile's (NASDAQ:TMUS) latest Un-carrier move isn't as splashy as some of its previous moves like offering unlimited data, taking out taxes and fees from customers' bills, or giving every customer free Netflix. The latest move is that it's improving customer service by offering a more personalized team of representatives to answer questions and help solve problems.

Each region is assigned a "team of experts" that will be available around the clock for customer service calls. What's more, when T-Mobile customers contact customer service, they won't go through an automated service, they'll talk to a human being. All this extra manpower is going to cost a lot of money, but T-Mobile CEO John Legere thinks it will pay off in the long run.

Considering the increasing saturation of the postpaid wireless market, record low customer switching, and how much customers value good customer service, it looks like Legere might be right. 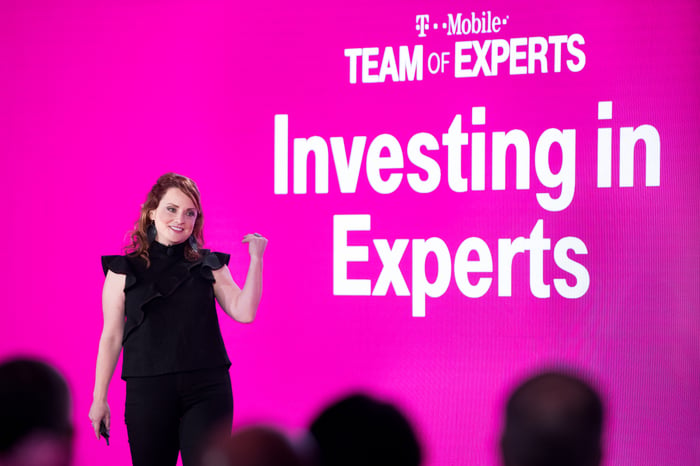 T-Mobile has done a great job of improving its subscriber loyalty. In fact, it was the only one of the four major carriers to improve its churn rate year over year last quarter. It set a new record for the company, 0.95%. Still, that number falls short of rivals AT&T (NYSE:T) and Verizon (NYSE:VZ), which are about 15 basis points better.

Some 7.7% of wireless customers said a "priority customer care line with no wait times" would most influence their decision to stay with their current provider, according to a survey from Strategy Analytics. And 68% listed quality of customer service as an important factor when considering a wireless provider.

Improved customer service could keep driving T-Mobile's churn levels lower. An 8% reduction in churn would get T-Mobile about halfway toward levels similar to AT&T and Verizon. That would equal about 400,000 fewer subscriber losses over the course of a year, resulting in $80 million in additional EBITDA, according to Strategy Analytics.

That's a pretty good return for T-Mobile. For reference, Verizon has added just 880,000 net new postpaid phone customers over the past year, and AT&T added just 256,000. That's despite their extremely low churn rates. If T-Mobile can keep 400,000 customers per year from switching, that decreases the available pool of net additions for its competition while increasing its own net additions.

What if everyone else follows suit?

In Legere's presentation introducing the new "team of experts" strategy, he noted a lot of Un-carrier moves are designed to push the competition into action. We saw that happen when T-Mobile separated device billing from service billing and when it reintroduced unlimited data plans. It's unknown how the competition will respond to improving customer service.

If the past is any indication, however, if the competition does jump on board, it could seriously mute the positive impact of the improved customer care strategy. When T-Mobile tried to increase customer switching by giving away new iPhones a couple years ago, all the competition followed suit. The net effect was that T-Mobile didn't attract any more customers than it would have otherwise; the ploy simply ate into its margins.

T-Mobile knows that's a distinct possibility, but it's willing to push the industry forward, and it's built a strong brand around that message. That's certainly valuable unto itself.

And it's hard to argue with the results of the strategy. T-Mobile is adding a million new postpaid subscribers every quarter while the rest of the competition is fighting for scraps. That kind of growth makes it possible to take risks like spending more on customer service, especially when it could result in an additional $80 million hitting the bottom line every year.