For the past year, shares of Hawaiian Holdings (NASDAQ:HA) have traded well below their December 2016 high due to competitive concerns. United Continental (NASDAQ:UAL) began a major expansion in Hawaii at the very end of 2017, while Southwest Airlines (NYSE:LUV) is expected to start flying to Hawaii within the next few months.

Despite investors' concerns, Hawaiian Airlines posted solid unit revenue growth in the first half of the year. However, the carrier's initial third-quarter guidance called for flattish revenue per available seat mile (RASM). Furthermore, Hawaiian has reduced its guidance twice since the beginning of September.

As a result, Hawaiian Airlines stock has plunged about 16% since the beginning of September. The latest 5% drop came on Tuesday, after Hawaiian reduced its Q3 guidance for the second time. Yet unit revenue growth is likely to rebound quickly, making the recent dip an intriguing opportunity to buy Hawaiian Holdings stock at a bargain price. 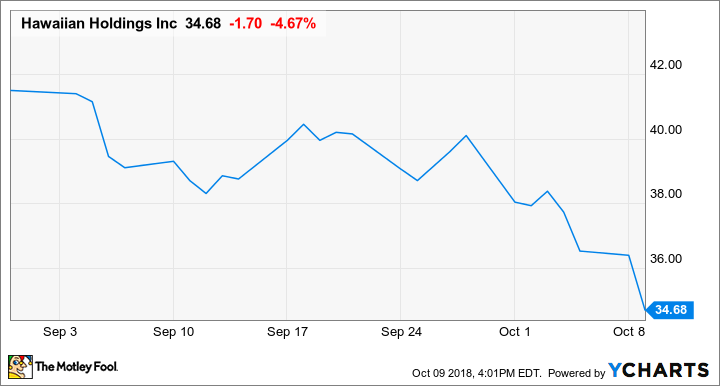 Back in July, Hawaiian Holdings management projected that Q3 RASM would be in a range of down 1.5% to up 1.5% year over year. That already would have represented a slowdown from the carrier's 2.7% RASM increase in the first half of 2018.

A drop in bookings related to increased volcanic activity on Hawaii's Big Island was a key driver of the expected RASM growth slowdown. Yet the freak weather problems were just beginning.

In early September, Hawaiian stated that RASM was on track to decline 0% to 2% in the third quarter due to the impact of Hurricane Lane, which hit Hawaii in August. While that storm wasn't as devastating as initially feared, it did cause significant disruption due to heavy rains and flooding, primarily on the Big Island.

Hawaiian Airlines slashed its third-quarter guidance again on Monday afternoon, pointing to the impact of Hurricane Olivia on the Hawaiian Islands and Typhoon Jebi on Osaka, Japan, during the month of September. It now expects to report a 1.5% to 2.5% RASM decline for the quarter.

Thus, Hawaiian Airlines' business was negatively impacted by a volcanic eruption, two hurricanes, and a typhoon last quarter. Yet while natural disasters do occur from time to time, this was an extremely unusual convergence of bad weather -- particularly for Hawaiian Airlines, as hurricanes rarely hit Hawaii.

Fortunately, the Kilauea volcanic eruption has already subsided. Hawai'i Volcanoes National Park reopened in late September. Furthermore, the hurricanes didn't do much lasting damage. As a result, the third-quarter RASM decline is more likely to be an anomaly than the beginning of a trend.

Capacity growth in the mainland–Hawaii market by United Airlines and other rivals has weighed on Hawaiian Airlines' RASM this year. However, industry capacity growth to Hawaii is starting to slow. In August -- the most recent month for which data are available -- industry capacity between the West Coast and Hawaii increased 6.8% year over year, just half the growth rate seen in the first half of 2018.

While United won't fully lap its Hawaii expansion until late December, other airlines appear to have cut some flights to Hawaii in response to overcapacity and falling fares.

Looking ahead, Southwest Airlines is on track to begin flights to Hawaii in early 2019 (or perhaps at the very end of 2018), which will put further upward pressure on industry capacity. But by the first quarter of 2019, West Coast-to-Hawaii industry capacity excluding Southwest could potentially be down year over year.

It's still not clear how many flights a day Southwest Airlines will offer to Hawaii. Nevertheless, there's a good chance that the competitive capacity environment in 2019 will be more favorable than what Hawaiian experienced in 2018.

Self-help initiatives are about to kick in

Rising fuel prices and the impending arrival of Southwest in Hawaii both represent meaningful earnings headwinds for Hawaiian Airlines. However, several offsetting factors should allow the carrier to return to earnings growth soon. For example, Hawaiian has retired three of the eight Boeing 767s it had at the beginning of 2018, and the rest are on track to exit the fleet by January. Meanwhile, it now has nine A321neos in its fleet, with two more scheduled to arrive by year end. This fleet transition will drive significant reductions in Hawaiian's fuel consumption and maintenance costs. It will also boost RASM by increasing the supply of extra-legroom seats and enabling the carrier to better tailor capacity to demand on each of its West Coast routes.

In the international market, Hawaiian Airlines has suspended its unprofitable Beijing route as of this week. That route will be replaced with nonstop Boston-to-Honolulu service starting in April. Hawaiian also recently expanded its frequent-flyer partnership with Japan Airlines (JAL) and is moving closer to creating a joint venture with JAL for Asia–Hawaii flights.

In short, a number of Hawaiian Holdings' profit-improvement initiatives are set to kick in during the next quarter or two. These should offset most or all of the earnings headwinds from rising fuel prices and new competition from Southwest Airlines. With Hawaiian Holdings stock trading for less than seven times its projected 2019 earnings, I might try to buy even more shares of this underappreciated company in the near future.