Please ensure Javascript is enabled for purposes of website accessibility
Log In Help Join The Motley Fool
Free Article Join Over 1 Million Premium Members And Get More In-Depth Stock Guidance and Research
By Rick Munarriz – Nov 6, 2018 at 9:30AM

GoDaddy is just one of five stocks poised to run with the bulls this month. Let's dive into all five.

The weather is starting to cool down this month, but some stocks are just beginning to heat up. There are a few stocks primed to make big moves in November, potentially rewarding investors interested in doing some early holiday shopping. 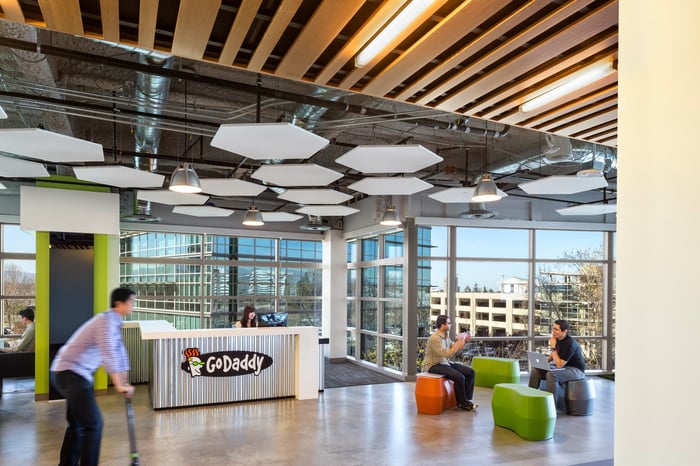 The world's leading premium streaming service is on a roll. It followed up a disappointing second quarter with a blowout third quarter, and it's now armed with more than 137 million streaming accounts worldwide.

The climate is ripe for a bounce in November for Netflix. The stock is trading 17% lower than last month's post-earnings peak, and it's done nothing but put out great shows that will only attract and entertain new members..

The country's top domain name registrar won't take long to move this month. It reports after Tuesday's market close. Analysts see revenue rising 16% in the third quarter. Revenue has grown at a double-digit percentage clip in each and every quarter since GoDaddy went public at $20 in 2015. Wall Street pros are also expecting earnings to more than quadruple to $0.17 a share.

Nearly half of GoDaddy's revenue comes from domain name registrations, but the faster-growing component of its business is the growing number of hosting and cloud-based services it offers its growing customer base that is presently more than 18 million users strong. The stock has retreated 14% since hitting all-time highs last month, and another strong quarter this week could help push it back up to new highs.

Chinese internet stocks are out of favor, and one of the biggest sinkers has been NetEase. The online gaming specialist has seen its stock close higher for six straight trading days, but it has still fallen 41% since peaking late last year.

China's government has been cracking down on gaming content and slowing new releases, eating into the livelihood of NetEase and its peers. NetEase is starting to pick up the pieces, and we'll get a clearer snapshot when it reports fresh financials next week. Analysts see a nearly 36% surge in revenue, making next week's report its headiest growth in a year. Though this should also be NetEase's fifth consecutive quarter of declining year-over-year profitability, the depressed shares already have enough baked-in pessimism. The stage is set where even a modest report next week can send the shares higher.

There's no place like At Home, at least in the retail space for home decor. At Home operates a rapidly growing chain of superstores stocking as many as 50,000 different home decor items. At Home is connecting with consumers with a big-box concept, and the proof is in the impressive streaks that At Home is rattling off these days.

At Home should report its latest quarterly results near the end of the month. Analysts see all three streaks being extended again in that report, making this an opportunistic time to buy into a stock that has shed more than a quarter of its value since its June peak.

Sirius XM has defied concerns that satellite radio would be displaced as in-car entertainment as more people take advantage of connected cars to stream smartphone content through their dashboards. It's rocking, and monthly churn is near a historical low. Sirius XM already reported quarterly results last month, but it's still a hot name to watch in November given recent setbacks after announcing an acquisition that would give it more skin in the streaming game.