The game isn't over for this top game maker.

It's been a volatile year for Electronic Arts (EA -1.78%) stock. The shares were up more than 30% in the first half of 2018 before disappointing guidance and a broad market sell-off sent them tumbling. The shares are now down 12% year to date.

We're going to take a look at three charts that show why the maker of The Sims and Madden NFL 19 is still a stock you want to hang on to. If you don't own shares, this might be a great opportunity to consider taking the plunge. 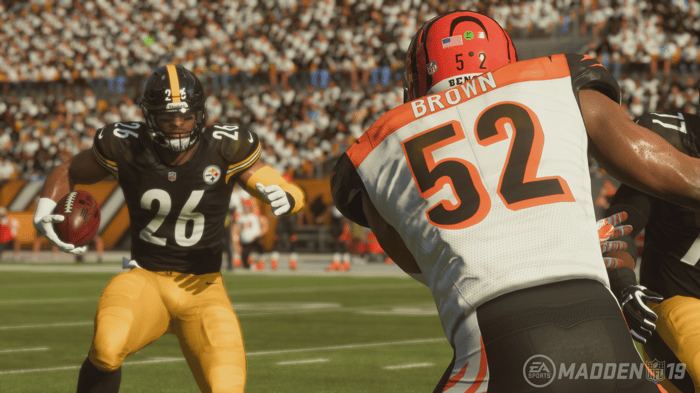 One of the key factors propelling video game stocks in recent years has been the industry shift to digital distribution of games. Selling them directly to gamers over their PCs or consoles generates higher margins for EA, versus the higher cost of producing physical game discs.

Take a look at this chart, which shows digital revenue (green bars) growing as a component of total revenue (blue bars). Digital revenue growth has been a game-changer for EA's profitability. As digital revenue has become a larger contributor to the top line, EA's gross margin has expanded over 5 percentage points since fiscal 2015. 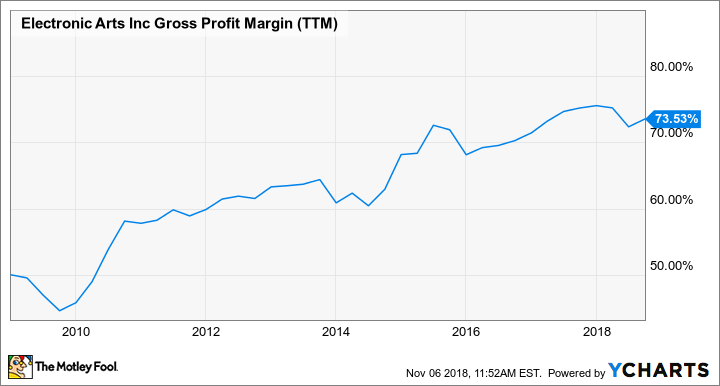 EA expects gross margin to be 72.4% this year, which is lower versus fiscal 2018. But that's because of the adoption of a new accounting rule; the underlying trend of expanding margins is still intact. During the company's second-quarter conference call, COO Blake Jorgensen said, "Underlying profit was much stronger than we had expected, driven by increased sales, better gross margin, and lower operating expenses."

He also said, "The digital transformation continues with growth in full-game downloads and live services and the launch of our first frontline subscription service." Although revenue derived from full-game downloads is down 9% on a trailing 12-month basis, it was up 32% in the second quarter, as EA released new versions of its EA Sports titles. Management guided for full-game downloads to grow between 20% and 25% for the full year, which is above their original expectations due to greater interest they are seeing from gamers who are choosing to buy games digitally.

One of the best reasons to own a top video-game stock like Electronic Arts is the tendency of these companies to generate robust amounts of free cash flow. Cash is the lifeblood of any business but especially in a creative industry like video games. More cash generated from operations leads to greater amounts the company can spend on game development talent, which is crucial to consistently making games that can grow revenue over the long term. 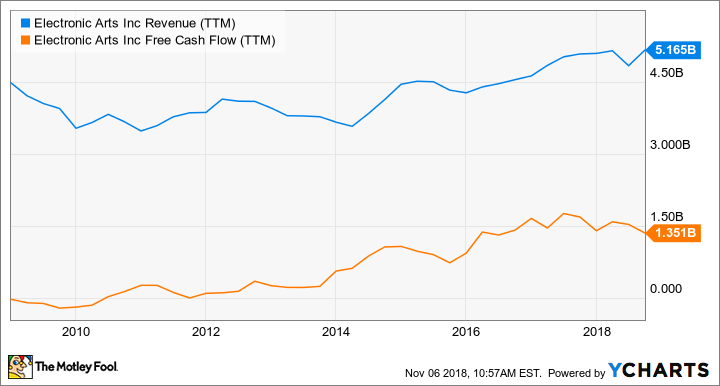 Because of its robust cash generation, EA has built a fortress-like balance sheet with $3.55 billion in net cash. This opens the door for EA to potentially initiate a regular dividend. For now, management is focused on investing in more digital services, such as a cloud-based subscription service, which CEO Andrew Wilson expects to become a large contributor to the company's top line over the long term. No doubt, that would cause EA's digital revenue to grow significantly while expanding margins and free cash flow.

These charts show that the maker of top games like FIFA 19 and Battlefield V is still in the middle of a long-term shift toward digital distribution, putting the company on a path to higher profits, and setting up shareholders to experience further gains over the long term.