Please ensure Javascript is enabled for purposes of website accessibility
Log In Help Join The Motley Fool
Free Article Join Over 1 Million Premium Members And Get More In-Depth Stock Guidance and Research
By Joe Tenebruso – Nov 2, 2018 at 10:08AM

The "Battlefield V" delay will crimp the game maker's sales and profits in fiscal 2019.

Electronic Arts (EA 3.59%) reported second-quarter financial results on Oct. 30. The video game titan is enjoying strong sales of its bedrock sports franchises, but the delayed launch of a major title forced the company to cut its guidance for the full year.

Total net bookings -- essentially the amount of products and services Electronic Arts sold during the period -- rose 3.6% year over year, to $1.22 billion, besting EA's guidance by $62 million. The company chalked up the outperformance to strong sales of FIFA 19 and Madden NFL 19 game downloads and related content.

Digital net bookings jumped 10%, to $637 million, in the second quarter and now account for 69% of EA's business on a trailing-12-month basis, up from 63% in the year-ago period. These gains were driven in part by a 6% increase in live services net bookings, to $328 million. The live services segment includes Electronic Arts' subscription services, as well as in-game transactions and esports revenue.

Esports, or competitive gaming, continues to be a powerful growth driver for the video game industry, and Electronic Arts is a prime beneficiary of this global trend. More than 20 million players participated in EA's FIFA esports league, and viewership of the FIFA eWorld Cup Final increased fourfold compared to the previous year.

During a conference call with analysts, CEO Andrew Wilson highlighted some of the ways Electric Arts plans to profit from the esports craze:

Players who watch our esports content play more, return more frequently, and are choosing to invest more. With expanded competitive ecosystems and new experiences for our players this year, we see strong potential for continued growth, including increased revenue streams through sponsorships, licensing deals with esports leaders, and broadcast agreements including ESPN that continue to reach new audiences.

All told, EA's second-quarter operating income improved to $258 million -- compared to a loss of $41 million in the second quarter of fiscal 2018 -- due to a combination of higher sales, gross margin expansion, and lower operating costs. Net income, meanwhile, came in at $255 million, or $0.83 per share, compared to a net loss of $22 million, or $0.07 per share, in the prior-year period.

Despite these relatively solid results, Electronic Arts was forced to reduce its full-year guidance due to the delayed release of its popular shooter game, Battlefield V. 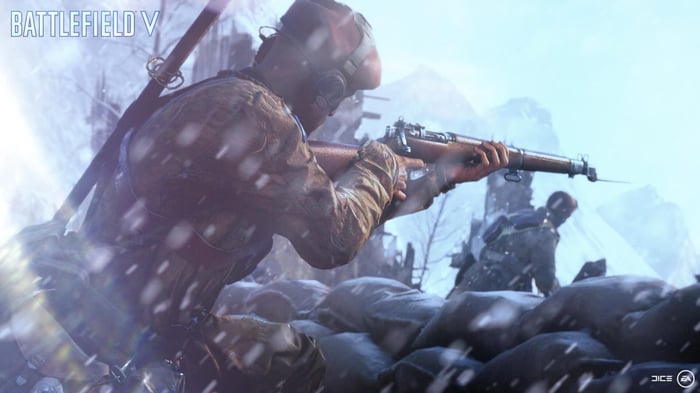 For the third quarter, EA is guiding for net bookings of approximately $1.725 billion and net revenue of $1.375 billion. Management also forecasts net income of $188 million, or $0.61 per share.

Battlefield V is set to launch Nov. 20, about a month later than had been expected. The delay was previously announced. "On November 20, we will bring the community into a new Battlefield that has been designed from the ground up as a service. At launch, Battlefield V will be the deepest game we've ever made in the franchise, taking players into the unseen fronts, untold stories and intense combat of the world's greatest conflicts through bigger-than-ever multiplayer and gritty single-player War Stories," Wilson said during the conference call. "Then just about 2 weeks later, our Tides of War live service will begin a regular cadence of major content updates delivered to all Battlefield V players. Each chapter of the service will bring a new dimension to the experience, fundamentally changing how the game is played."