The digital entertainment giant has multiple avenues for growth.

Electronic Arts (EA -0.21%) shared some insights regarding its key growth drivers during its fiscal 2019 first-quarter earnings call. Here are the highlights for long-term investors.

Among our top titles, EA SPORTS FIFA continues to demonstrate unique ability to engage more than 100 million players across geographies, platforms, and generations.

Several of Electronic Arts's games enjoy truly global reach, with its FIFA soccer franchise alone accounting for more than 100 million players worldwide. Yet with more than 2.2 billion active gamers in the world, according to global market intelligence company Newzoo, EA has plenty of room to expand its player base in the years ahead. In fact, CEO Andrew Wilson recently said that the company's long-term vision is "to connect a billion people in play." If EA can even get close to that goal, shareholders should do well.

As we move further into FY 2019, we are continuing to push the boundaries and pioneer for our players. Origin Access Premier launches next week, a first-of-its kind subscription service that will include unlimited access to our newest PC titles. We believe strongly in the transformative nature of subscriptions. In a network where subscriptions can reduce friction and help give players ready access to more great content, we are enabling developers from EA and beyond to bring truly amazing and immersive new experiences to a global audience.

One way Electronic Arts plans to better monetize its massive player base is via subscription services. Origin Access Premier is a new service that will offer access to more than 100 EA games from the day of their launch, and sometimes even earlier. EA is also working to add more third-party games to its services as a means to further increase its value to subscribers.

Moreover, the recurring nature of subscription revenue makes it highly valuable from a business standpoint, as it tends to give management greater clarity for forecasting purposes and from which to base their cost structure. As such, the more EA can migrate its business model toward subscription revenue -- and away from one-time purchases -- the greater value investors will likely assign to its revenue and profits and, therefore, its stock. 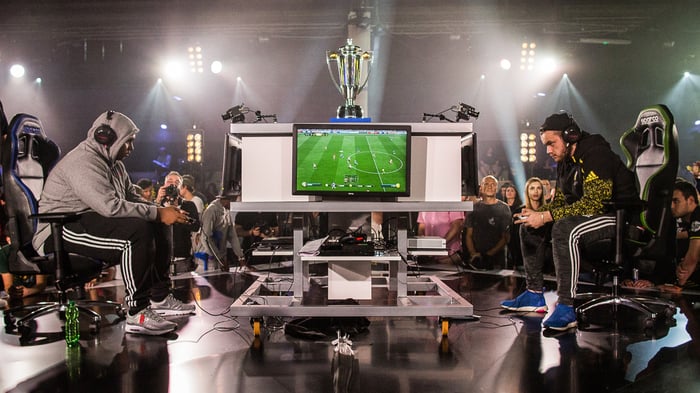 The massive potential of esports

In competitive gaming, our franchises are uniquely fulfilling the tremendous demand, widespread appeal, and longevity of traditional sports in the context of esports. Next week is the FIFA eWorld Cup Grand Final, the pinnacle of this year's competitive FIFA season that has seen participation from more than 20 million players from 60 countries and 80% more average viewers so far over last season. Our next season of Madden NFL competitive gaming also kicks off this quarter, with the second year of the 32-team Madden NFL Club Championship and broadcasts set for the ESPN network.

We will continue to evolve and grow our competitive leagues and programs at an accelerated pace.

Electronic Arts is particularly well positioned to profit from the exploding growth of esports. Games such as FIFA and Madden are well suited for competitive tournaments, and EA has seen strong early results from its esports initiatives. With this nascent industry expected to generate more than $1.4 billion by 2020, according to Newzoo, investors can expect esports to be a powerful growth driver for Electronic Arts and other game makers in the coming years.

On the trailing 12-month basis, digital net bookings now represent 69% of our business compared to 63% a year ago.

The video game industry's transition to digital game downloads and content distribution has been a boon for Electronic Arts. Digital sales tend to be more profitable than physical game sales since there's no need to incur the costs of manufacturing, storing, and transporting physical game discs. In turn, EA's profitability has improved significantly in recent years, with gross margin rising to 75.2% in fiscal 2018, up from 68.3% in 2015.

Operating cash flow for the last 12 months was $1.6 billion. ... During the quarter we also repurchased 2.3 million shares at a cost of $300 million leaving 2.2 billion available on our buyback program.

As Electronic Arts's margins have improved, so too has its cash flow production. EA expects to generate approximately $1.82 billion in operating cash flow and about $1.7 billion in free cash flow in fiscal 2019. That's up from less than $1.1 billion in OCF and $1 billion in FCF in 2015.

This strong cash flow generation -- combined with the $5 billion in cash and investments on its balance sheet -- allows EA to invest heavily in the development of new games while also rewarding investors with share repurchases. That's a powerful formula for shareholder wealth creation.

This is an amazing time to be making games and entertainment. As we saw last month at EA PLAY and E3, the energy and creativity that defines this industry continues to reach new heights. Innovation is enabling us to break through barriers to expand the accessibility of games and grow an audience in the billions. Through more ways to play, create, compete, watch, and share, the thread of social connection that is unique to games is becoming even stronger and bringing players deeper into global communities, the digital transformation to take games from finite to infinite experiences, and each day our opportunity at EA is to turn incredible ideas into entertainment that will inspire the world to play.

New technologies such as cloud gaming, advanced artificial intelligence, and machine learning are allowing game makers to take digital entertainment to a whole new level. The games are becoming more immersive, connected, and strikingly beautiful from a graphics perspective. These improvements are enticing more people to play -- and Electronic Arts is at the forefront of this global trend.