Shares of SeaWorld Entertainment (SEAS -1.02%) were floating higher today, up 8.6% as of 3:30 p.m. EST, after being up 10% earlier in the day. There doesn't appear to be any news behind the shares' surprising strength today, but that doesn't mean there hasn't been news recently.

For the past couple of weeks in fact, rumors have been popping up from time to time about a possible bid by Six Flags (SIX -0.86%) to buy out SeaWorld. These rumors apparently first appeared on Facebook -- not necessarily the most reliable source -- on a page run by the ThemedReality blog. They have not been confirmed. (To the contrary, analysts at SunTrust Banks discounted the rumor as "questionable, at best.")

That being said, even if the rumors turn out to be entirely false, and no buyer is really out there looking to pay a big premium to acquire it, SeaWorld stock isn't looking as bad as it once did. Despite doubling in price over the past year, SeaWorld has a market cap of only $2.4 billion today. Earnings remain depressed ($35 million), but free cash flow at the company has surged to nearly $100 million over the past year. 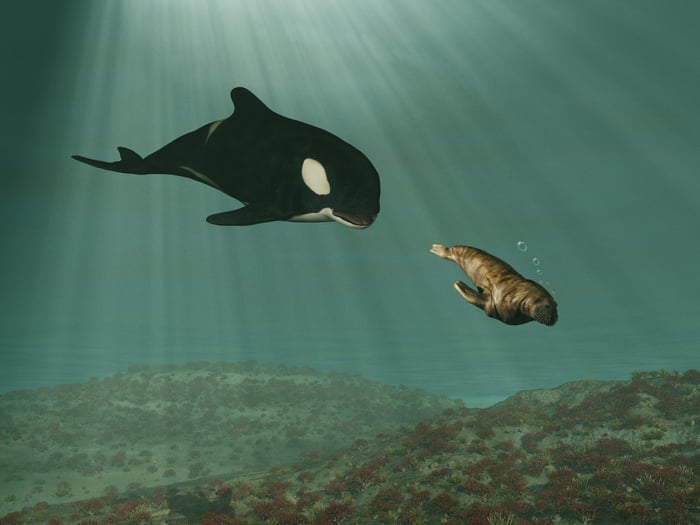 Is SeaWorld about to get eaten? Image source: Getty Images.

If only SeaWorld would take some of that cash it's producing, and use it to pay down the company's debt (which is down $100 million over the past five years, but still sizable at $1.5 billion), maybe it really would be worth buying -- for Six Flags, and for investors in general.

Why Did It Take a Disney World Rival 2 Years to Open New Roller Coasters?
415%