Pepsi has been a tremendous dividend stock for investors, but these three stocks will pay you even more.

When it comes to dividend stocks, PepsiCo, Inc. (PEP -0.50%) has long been a favorite for investors, and for good reason. Earlier this year, Pepsi increased its quarterly dividend by 15%, which marked the company's 46th consecutive annual dividend increase. Even more impressive than that record is that Pepsi has paid consecutive quarterly cash dividends since 1965. However, for investors craving a higher dividend yield than Pepsi's 3.2%, three Motley Fool contributors have dividend stocks you should check out: General Mills (GIS -0.55%), General Motors (GM -0.89%), and Kellogg Company (K -0.03%) -- here's why.

Chuck Saletta (General Mills): According to market data powerhouse IRI, General Mills' Honey Nut Cheerios currently sits atop the list of America's favorite branded breakfast cereals. The advantage of being No. 1 is that you usually generate a lot of cash from that position. The disadvantage is that you've got competition nipping at your heels, making it difficult for you to deliver market-trouncing growth.

From an investor's perspective, that slower expected growth from being No. 1 in a mature industry often leads to a lower price to earnings ratio and a higher yield. General Mills, trading at around 12 times trailing earnings and sporting an approximately 4.5% yield, certainly fits that bill. Compare that with PepsiCo's price near 35 times earnings and about 3.2% yield, and General Mills' investors are paying a lower price and getting more immediate cash back for their food titan's current earnings. 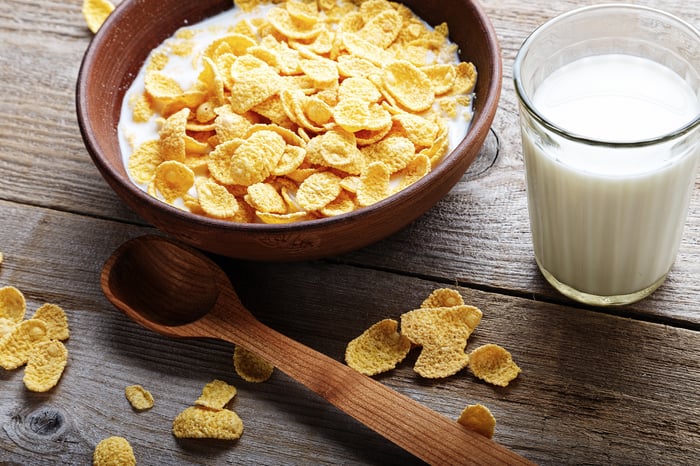 Daniel Miller (General Motors): While Pepsi's 3.2% dividend yield is nothing to sneeze at, Detroit's largest automaker, General Motors, is boasting a yield near 4.3%. There's pessimism surrounding automakers as the light vehicle market in the lucrative North American market slows, but there's another reason for investors to be optimistic about GM and its juicy dividend: its recent restructuring plan.

Nobody wants to hear about job cuts, especially around the holidays, but such is business in a cyclical automotive market, and GM announced it would slash over 14,000 jobs in the U.S. and Canada. Even if sales are plateauing in North America, those levels remain near record highs, so why the decision to restructure? For GM, it's about preparing for the future, and CFO Dhivya Suryadevara said the move should boost its adjusted automotive free cash flow from roughly $4 billion in 2018 to around $10 billion by the end of 2020.

Generally, massive restructuring efforts are a signal that serious changes are needed for a company's business model. But that's where in-the-know investors should be optimistic about General Motors, which is doing very well business-wise. This restructuring move will help GM in a few important areas. The extra adjusted automotive free cash flow can help support its dividend, even if it's unlikely to grow the dividend in the near term, and it could help management fund the plethora of future product and technology developments for smart mobility and driverless vehicles -- both of which are crucial for GM's future growth story. The move also helps GM prepare for a worst-case scenario if the U.S. were to enter a recession and consumers became more reluctant to purchase a big-ticket item such as vehicles.

General Motors is trading at a paltry forward price-to-earnings ratio of 6, mostly because the auto industry reached its peak during this cycle. But that offers long-term investors who are willing to endure the ups and downs a dividend yield that tops that of Pepsi, and it offers a company that's already restructuring to boost its cash flow an opportunity to support its future. It's not a bad stock to look at if you're shopping for a cheap dividend stock during the holidays.

It pays to eat breakfast

Nicholas Rossolillo (Kellogg): As consumer trends have shifted toward healthier and natural fare over the years, many packaged-food companies have struggled. Kellogg is just one example. The maker of snacks and breakfast items like Cheez-It, Pringles, Frosted Flakes, and Pop-Tarts saw a double-digit dip in revenue starting in 2013 that lasted through 2017. Sales of older packaged goods took a hit, and the company has been busy reshuffling its portfolio to get back in good graces with the American pantry.

Its efforts have been working, as organic growth and acquisitions have helped net sales rebound in the last year. In the fall of 2017, the company purchased protein bar start-up RXBAR for $600 million, and Kellogg continues to dump cash into its other existing brands -- especially in the snack-food department. During the third quarter, revenue increased 6.9% year over year, and 2018 to-date revenue is up 5.8%.

Those new sales have helped rekindle growth in profitability. Earnings per share in 2018 to-date are up 71%, and trailing-12-month price to free cash flow (money left over after basic operations and capital expenditures are paid for) is a lowly 11.8. That looks like an attractive price to pay for a company that, by all indications, is in rebound mode.

The rebound in the bottom line helps support Kellogg's dividend -- the real reason to own the stock. As of this writing, shares yield an attractive 3.5%. The company has been slowly increasing that payout as well, doling out a $0.02 per-share increase last quarter to bring the quarterly pay to $0.56. It isn't the most exciting company out there, but Kellogg stock could have a place in your portfolio if income is what you're after.