Cable giant Comcast (NASDAQ:CMCSA) is on a roll these days. The company hasn't missed an earnings target since the end of 2015. Revenue and EBITDA profits have been trending steadily upward for about a decade. Analysts love the stock, too -- 19 out of 24 Wall Street firms with a published opinion on Comcast rate it as some sort of buy right now and the last five would just hold this stock.

That's great, but Netflix (NASDAQ:NFLX) is still a much better investment in the media sector. Let me show you why. 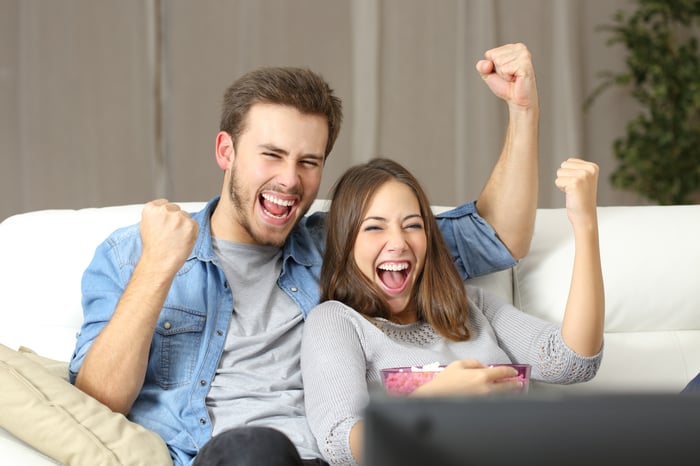 What's up with Comcast?

Comcast's bread and butter business is getting stale. People just don't subscribe to big-ticket cable TV packages like they used to, and the telephone component of Comcast's "triple-play" packages is losing value to cellphones day by day. The company is adding high-speed internet subscribers faster than it's losing TV customers, so it's not an entirely lost cause.

Still, internet service revenue that accounts for just 20% of Comcast's quarterly revenue is facing competitive pressures of its own. Cable modems are not the only game in town for high-speed internet access anymore, and telecoms will start muscling in on that market over the next few years with fixed and mobile wireless plans based on the new 5G standard. Comcast is working around these issues by pursuing international growth through a $39 billion buyout of European pay-TV giant Sky.

On top of all that, the NBCUniversal content division ebbs and flows with each year's relative hits and misses -- like any other traditional Hollywood studio. At the moment, that arm of Comcast's operations is helped by strongly profitable theme park operations, based on the Harry Potter sections of Universal Studios parks around the world.

So Comcast investors have to embrace a very cash-intense international growth strategy to make up for dim domestic prospects, and you never really know how the TV and movie studio will perform next year. Personally, I'd rather not invest in a business model as hollow as Comcast's.

Both Comcast's NBCUniversal studio and Netflix produce a lot of original content. The ways these companies monetize their content couldn't be further apart.

Netflix isn't aiming for blockbuster hits that could bring a windfall at the box office and maybe spawn a franchise of sequels and spinoff titles. Instead, it's all about delivering a consistently high level of quality across many genres and niches in order to pull in curious potential customers for a free trial and then inspiring them to pay full price for several years of paid subscriptions. Without an effective ecosystem of great content for pretty much every taste, any single megahit would just boost the number of unpaid one-month trials for a short while.

You might compare this approach to Comcast's TV networks, ranging from Telemundo and NBC to Oxygen and Syfy. Like Netflix, these networks depend on a steady stream of subscription fees where any particular blockbuster or flop doesn't make or break the business model as a whole. However, these networks are typically bundled up in broad cable service packages -- and we've already talked about what's happening to those. Netflix stands alone, attracting or losing customers on its own merits. Judging by the company's industry-leading 112 Emmy nominations and 23 wins in 2018, Netflix is doing something right. That's why the company was able to add 28 million paying subscribers over the last year while also raising prices.

There you have it: Netflix is growing rapidly thanks to a conscious investment in high-quality content while Comcast attempts to nurse its outdated business model back to health. There's no question in my mind: Netflix is the better company and stock by far.