The streaming giant claims a record for one of its latest prestige efforts.

Since Netflix (NFLX 2.90%) began producing original programs several years ago, the company has famously declined to share viewership data for its growing library of content.

Occasionally, however, Netflix will pull back the curtain and provide a snapshot of how a particular movie or television series is doing. The company did just that with its recently released post-apocalyptic thriller Bird Box, which Netflix said had a record-setting debut. 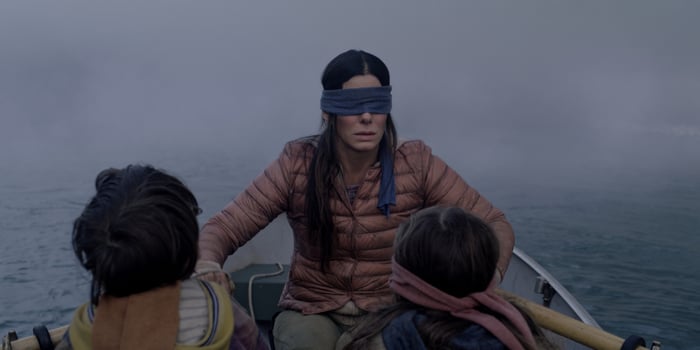 Nearly one-third of all Netflix subscribers tuned in to Bird Box in its first seven days of release. Image source: Netflix.

On Friday, the company tweeted, "Took off my blindfold this morning to discover that 45,037,125 Netflix accounts have already watched Bird Box -- best first seven days ever for a Netflix film!" With more than 137 million subscribers worldwide, that would mean nearly one-third of the company's viewers tuned in to the program in its first week of release.

To put this into perspective, if that many viewers plunked down $9.16 -- the average price for a movie in the U.S. -- it would amount to nearly $413 million in opening-week box office. While this isn't an apples-to-apples comparison, it does seem to support Netflix's contention that the movie is a resounding success.

It's important to note that some are downplaying the announcement, pointing out that there's no independent verification of the benchmark. This total could include viewers who clicked on the offering accidentally or watched the first few minutes of the film before deciding it wasn't for them. Netflix hasn't said how many people actually watched the movie through to the end.

An increasing focus on quality?

Bird Box, directed by Susanne Bier and starring Sandra Bullock, is among a number of prestige offerings from Netflix in recent months -- programs that the company released in theaters before being available to streaming subscribers. This is a departure from the company's long-standing habit of day-and-date releases -- the practice of releasing select films in theaters on the same day they launch on Netflix's streaming platform.

Alfonso Cuaron, best known for such popular hits as Gravity, Y Tu Mama Tambien, and Children of Men, was the creative mind behind Netflix's Roma, a retrospective of Cuaron's childhood. The passion project has received a significant amount of buzz on the film festival circuit and is widely considered to be in the running for an Academy Award. Alfonso Cuaron's Roma is on a quest for Oscar gold. Image source: Netflix.

The Ballad of Buster Scruggs, a Western anthology by the Cohen brothers, and Mowgli: Legend of the Jungle, directed by Andy Serkis, also received exclusive theatrical engagements before being released to Netflix subscribers.

The times they are a-changin'

Traditional television networks operate under a different model and have done so for decades. They use data gathered by ratings services such as Nielsen to provide viewership information on their programs. Broadcasters need to understand the popularity of their shows, so they can charge appropriately for advertising. Networks use these statistics to maximize their ad sales. Popular shows lead to increased rates for advertisers and greater profits for broadcasters.

For its part, Netflix doesn't care that much about ratings, as the company is obligated only to its subscribers, not to advertisers. The company merely needs to offer content that is compelling enough to keep growing its customer base and to convince viewers that the $10 or so per month they spend is worth it. Netflix accomplishes this feat by providing a broad slate of movies and television shows that appeal to a diverse and growing swath of subscribers.

It's more important for Netflix to continue to build its brand, remain in the cultural zeitgeist, and be part of the ongoing conversation. Trending programs such as Bird Box help the company achieve this goal. Netflix has consistently increased its year-over-year growth of subscriber count, on average, by more than 20% going back five years. While growth in its older U.S. market is decelerating, the rest of the world remains Netflix's oyster.

With brand-building hits such as Bird Box to bolster its image, Netflix's subscriber growth should continue for years to come.