One of the defense sector's most impressive portfolios was not enough to weather rising political tensions.

Lockheed Martin (LMT 0.35%), the world's largest defense contractor, dropped 12.8% in December, according to data provided by S&P Global Market Intelligence, leaving the company's stock down 18.4% for the full year. It was a difficult month for the markets in general, and fresh evidence that political infighting could weigh on future federal spending plans made December particularly difficult for Lockheed Martin shareholders.

Shares of Lockheed Martin have been caught up in the malaise surrounding the entire sector. Defense stocks were initially some of the chief beneficiaries of the 2016 election and single-party control in Washington, but as 2018 wore on, investors grew concerned that the stocks had climbed too far too fast. We warned in October that the U.S. midterms could cause declines, and in December, investors saw firsthand how political dynamics can impact stocks like Lockheed Martin.

Investors were rattled by the surprise mid-month resignation of Defense Secretary James Mattis. And a partial government shutdown that began late in the month after the White House and Congress were unable to agree on a spending plan led to doubts that the two sides will be able to come together and forge a fiscal 2020 compromise. 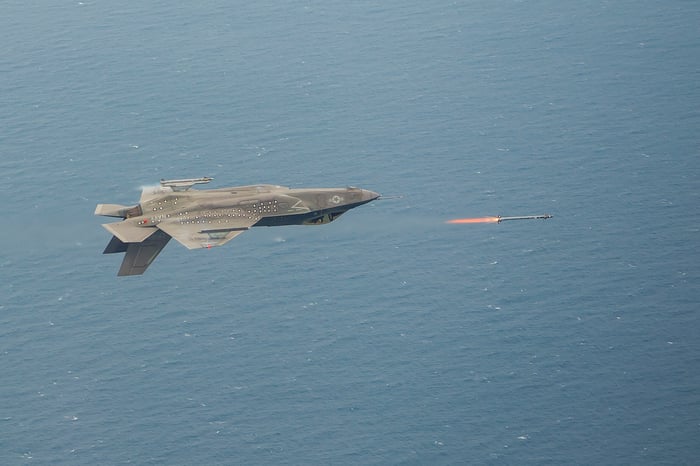 Lockheed also delivered some unexpected news mid-month when chief financial officer Bruce Tanner announced his retirement. Though there hasn't been any suggestion of irregularity, Tanner is well regarded for his candid communication with investors and his expertise managing Lockheed through a series of divestitures and acquisitions. Tanner is staying on with the company until mid-2019, and I don't expect any major disruptions, but any high-level transition like this one is bound to create some uncertainty.

Lockheed Martin has one of the best portfolios of business in the entire defense sector. There is nothing about this company's fundamentals that would indicate to me that this sell-off is justified.

It's hard to say what will happen to Lockheed shares over the next few quarters. Even assuming that this partial government shutdown is eventually resolved, the fiscal 2020 budget battle figures to be intense, and defense shares are likely to trade higher or lower day to day on individual lawmaker comments and overall Washington sentiment. Lockheed Martin's valuation puts it in the upper echelon of defense contractors, and even after the decline, I wouldn't consider the shares cheap, though I am monitoring for further weakness.

No matter what the headlines bring, long-term investors with Lockheed Martin in their portfolios should sleep soundly. And if Lockheed Martin shares were to have another month like December in the early part of 2019, it could become a buying opportunity.