Samsung (NASDAQOTH: SSNLF) recently released its latest Galaxy S10-series smartphones to what appears to be critical acclaim. Android Central calls it "an easy buy for just about everyone" and CNET predicts that the larger Galaxy S10 Plus "will be one of the year's best phones."

Apparently, Samsung's hard work on this latest family of devices is set to pay off handsomely. 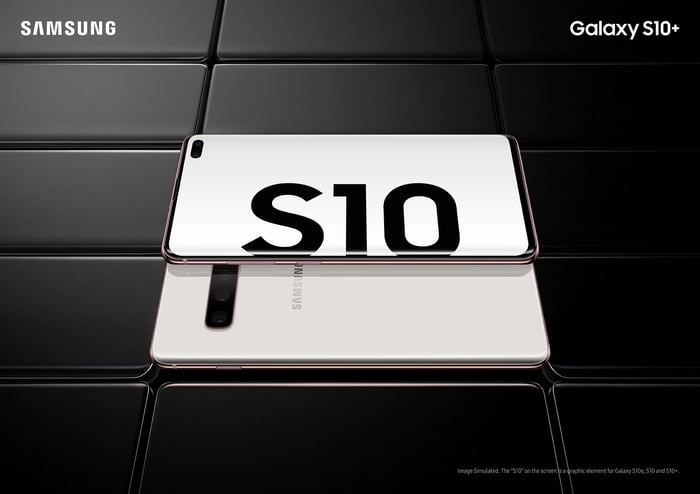 Analyst Ming-Chi Kuo of TF International Securities recently claimed that "pre-order demand for the S10 series is better than expected," apparently climbing between 30% and 40% from the number of pre-orders seen for the prior-generation Galaxy S9-series smartphone. To that end, Kuo is ratcheting up his 2019 shipment expectations for the device from a range of  30 million-35 million to a new band of between 40 million and 45 million.

His explanation for these phones' apparent success? Kuo says that the devices offer "spec differentiation from iPhone models, including an ultrasonic fingerprint on display (FOD), triple rear camera, and bilateral wireless charging." Here's why this doesn't bode well for rival Apple (NASDAQ:AAPL).

Many industry watchers believe that the premium portion of the smartphone market is experiencing unit shipment declines. If that dynamic ultimately plays out in 2019, Apple might not only need to cope with a poor overall market-share loss to local vendors like Huawei in China, it could lose share in large markets like the United States -- at least until Apple launches a new round of products this coming September.

Indeed, while Apple dominates smartphone unit share in the United States, boasting a quarterly market share which ranged from 37% to 47% in 2018, Samsung is a strong second-place vendor and saw its quarterly share in the country bounce between 22% and 26% last year.

While Apple's and Samsung's respective market share totals tend to peak following a new product launch and then taper off from there, the Galaxy S10-series devices could potentially lead to noticeable increases in both the peaks and troughs of the company's quarterly unit share in the United States. Those increases could come at Apple's expense.

A silver lining for Apple

As Kuo explained, the bad news for Apple is that the new Galaxy S10 smartphones and, in particular, the standard Galaxy S10 and the larger Galaxy S10+, do have a number of advantages over the current crop of iPhones. The good news, though, is that according to a previous report from Kuo, a lot of those deficiencies are set to be remedied with the upcoming line of iPhones.

Apple will reportedly be introducing features like a triple rear camera, bilateral wireless charging, and an upgraded Face ID setup. The form factors of the devices are set to stay the same, though, in contrast to what Samsung delivered with the Galaxy S10-series devices. The screen-to-body ratios of Samsung's devices increased generation over generation, which may explain why the S10-series is, per Kuo, performing relatively well in form factor-conscious regions like China.

It looks like Samsung has a strong set of offerings with its Galaxy S10-series of devices, and the relative strength of those offerings compared to Apple's current lineup could ultimately lead to larger-than-typical share loss on Apple's part over the coming quarter or two. Apple will, of course, have the opportunity to strike back with a new crop of iPhones in roughly six months.

Over the longer term, if Apple is going to stick to annual product launches, it will need to engineer its devices with advanced enough features and capabilities to allow them to withstand the increased competitive pressures that usually arrive roughly six months after their debut.