I won't keep you in suspense: Someone just paid nearly $4.6 million to have lunch with the Oracle of Omaha. That's not a typo.

Every year since 2000, eBay (NASDAQ:EBAY) has conducted an auction where Buffett agrees to have lunch with the winning bidder. Specifically, the winning bidder and as many as seven of their guests win lunch at the world-famous Smith & Wollensky steakhouse in New York City, where Buffett agrees to discuss anything that the winner(s) want, aside from what Buffett and Berkshire Hathaway (NYSE:BRK.A) (NYSE:BRK.B) will invest in next. 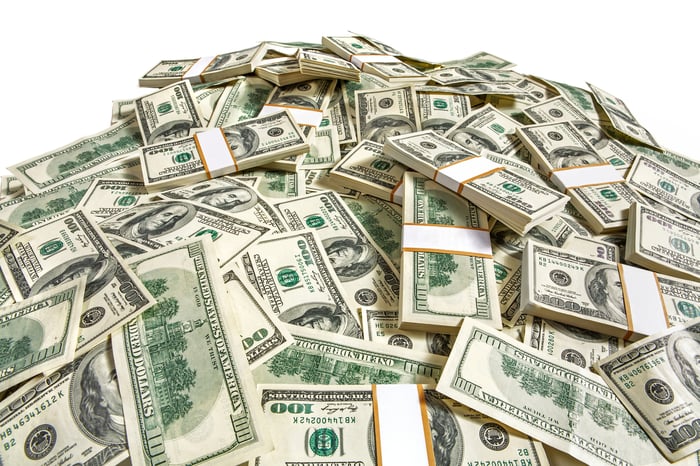 To say that the bids have become increasingly larger over the auction's 20-year history would be a massive understatement. Prior to 2003, the auctions were held outside of eBay's platform, and the bids topped out at $25,000. Since listing the lunch auction on eBay, though, bids have soared. By 2008, the lunch's price grew to more than $1 million. The lunch has sold for more than $3 million a few times, with the previous record of $3,456,789 set by anonymous bidders in both 2012 and 2016.

The 2019 auction shattered the previous record, with the lunch selling for a massive $4,567,888 after five bidders submitted a total of 18 bids. Even if the winning bidder chooses to max out their guest list and invite seven friends, this translates to $570,986 per person. However, don't expect to find out who won. The bidder chose to remain anonymous, as have five of the seven most recent winners before this year.

To be fair, it's not difficult to make the case that at least one previous winner got their money's worth. Ted Weschler, who won the auction in both 2010 and 2011 for the relative bargain prices of $2,626,311 and $2,626,411, respectively, ended up becoming one of Buffett's portfolio managers and currently manages about $12 billion of Berkshire's investments. The job offer came during the second meal.

How the proceeds are used

To be perfectly clear, this auction isn't designed to put money in the pocket of Warren Buffett, who obviously doesn't need it.

Instead, the auction is held each year to benefit San Francisco-based GLIDE, a charitable organization that focuses on anti-poverty and anti-discrimination issues. GLIDE provides about 2,000 free meals every day to people in need, as well as other services for San Francisco residents in need. In fact, 100% of the winning bid goes directly toward supporting GLIDE's programs, and including this year's winning bid, the auctions have raised more than $34 million for the foundation.

GLIDE was a favorite charity of Buffett's late first wife, Susan, who got the foundation on Buffett's radar.

Want to win lunch with Buffett?

Buffett has committed to holding the auctions every year for as long as it's practical to do so. If you have the means and want to have lunch with the greatest investor of all time, there's a good chance you'll get another opportunity next year (Here's the eBay page for the auction, if you're interested). However, given the price action on the Buffett lunch auctions in recent years, I wouldn't be surprised to see yet another record bid in 2020.

Here's How Much Someone Just Paid for Lunch With Warren Buffett @themotleyfool #stocks $BRK.B $EBAY $BRK.A Next Article
Current