The Glide Foundation's annual charity auction for a lunch with the Oracle of Omaha has begun.

For the 18th consecutive year, billionaire investor and Berkshire Hathaway (BRK.A 1.60%) (BRK.B 1.72%) chairman and CEO Warren Buffett is auctioning off a lunch with himself. The auction went live on eBay on Sunday June 4, and will conclude on Friday, June 9 at 7:30 p.m. PST, at which point a winner can invite up to seven of their closest friends to lunch in New York City with the Oracle of Omaha.

The catch? The bids for the annual Buffett lunch can get big. Really big.

The annual Buffett lunch auction is held to benefit GLIDE, a San Francisco-based charity that runs several anti-poverty programs. Buffett's late wife, Susie, came up with the idea in 2000, and was involved with the Glide Foundation until her death in 2004.

The auction's prize is a lunch held at the Smith & Wollensky steakhouse in New York City, and the winner can choose to attend the meal solo, or with up to seven guests of their choosing. 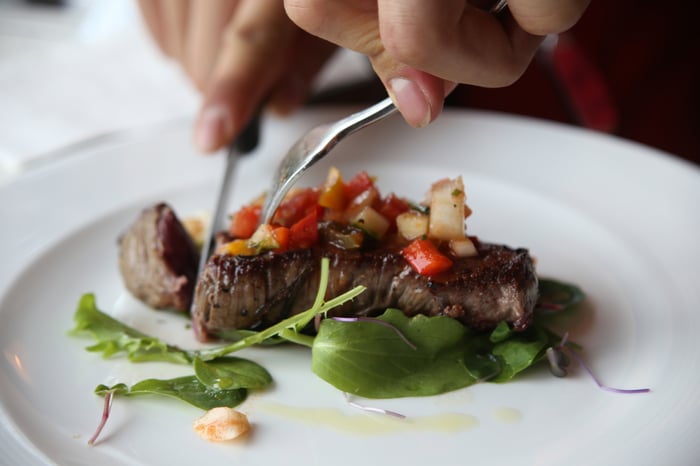 While the auction has never exactly resulted in a small donation for its winner, the bids have really skyrocketed in recent years. Last year's winner, who chose to remain anonymous, paid $3.4 million for the privilege. The 2014 and 2015 auctions were won by a Singaporean businessman and a Chinese gaming company, respectively, both of whom paid over $2 million. And Ted Weschler, who is now a Berkshire Hathaway investment manager, won back-to-back auctions in 2010 and 2011, and spent a combined $5.3 million. In all, the auctions have generated nearly $24 million for the Glide Foundation.

If you want to get in on this year's auction, be prepared to donate a similar amount, or perhaps even more. Bids for the 2017 auction exceeded $1 million within a minute after it began, where it remains as I write this on Monday afternoon.

Why pay millions for a single lunch?

It may seem completely ridiculous to you that people are actually paying millions of dollars for a single lunch, but some of them could have good reasons for doing so.

For example, former hedge fund manager Ted Weschler, winner of two Buffett lunch auctions, was subsequently offered a job with Berkshire as an investment manager. And it was reported that his discussions with Buffett during the two lunches he won had a lot to do with it. Now, he and fellow Berkshire investment manager Todd Combs manage a combined $21 billion of Berkshire's capital, and are likely to take over Berkshire's closely followed stock portfolio when Buffett is no longer at the helm.

In addition to the opportunity to pitch yourself, or a certain investment deal, to Warren Buffett, winners could potentially get a large tax deduction for their donation, since it technically constitutes a charitable contribution. The IRS allows taxpayers to deduct up to half of their annual income in charitable donations, so last year's winning bid may have translated to well over $1 million in tax savings for the bidder.

Whatever the reason, if you have deep pockets and want to have a private sit-down with one of the greatest investors of all time, you now have the chance to make it happen.