Two young stocks see opposite reactions to their good performances, while AT&T apparently sets a price range for its streaming service.

At times during earnings season, it seems like the flood of quarterly results is never going to stop. So it is following today's market close, when the headlines were stuffed with numerous prominent companies reporting results.

Here are two of those notables unveiling figures. Plus, a strategy is apparently being devised for a new phase in the Streaming Entertainment Wars. 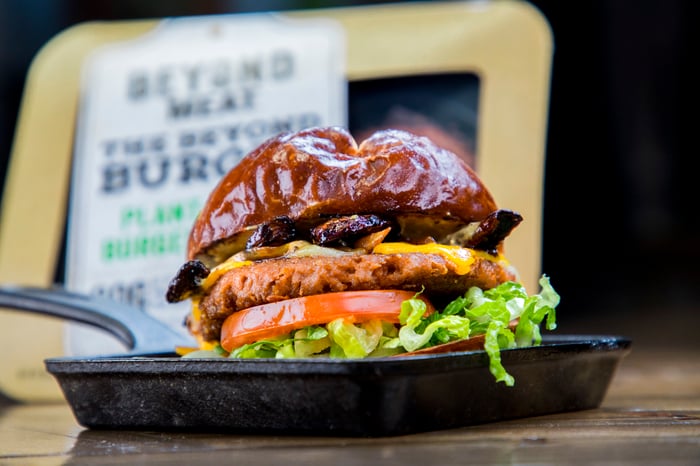 Beyond Meat's first time at the table

Plant-based alternative food producer Beyond Meat (BYND 14.33%) released its inaugural set of results as a public company after market close today, and the results were tasty.

Both of the headline fundamentals from the reported quarter beat analyst estimates. On average, these projected $38 million for revenue and a per-share net loss of $0.15.

Those beats were encouraging, but what really seems to have impressed investors is the company's guidance. Beyond Meat ticked up its revenue estimate for the full fiscal year -- it now believes it will take in $210 million for the year, slightly higher than its previous prognostication of $205 million. EBITDA, meanwhile, should reach breakeven. On top of that, the company added the caveat that these estimates are, if anything, conservative.

Beyond Meat said that robust sales of its leading product, the Beyond Burger, were largely responsible for the sharp revenue increase.

Beyond Meat has been a hot stock since its IPO, and these results should only crank up the heat. The stock is up a sizzling 18% in post-market trading tonight.

While we're on the subject of recent IPOs reporting quarterly figures, we'll take a look at DocuSign (DOCU 1.11%). The e-signature specialist unveiled its Q1 2020 results and the market's reaction to them was... interesting.

In spite of those beats, the company's stock is currently the leader in post-market decliners. This is mysterious, given the seemingly encouraging performance -- maybe investors were hoping for better revenue growth, as DocuSign has posted higher figures in the recent past. It's trading down a steep 21%.

Telecom and media giant AT&T (T -0.25%) might be on the verge of setting a price for its upcoming streaming service, according to media reports published this afternoon and updated in the early evening. It's also planning to bundle three crucial media assets into this offering.

The Wall Street Journal, citing "people familiar with the matter," said AT&T is planning to charge between $16 and $17 per month for a subscription. The service will include HBO, fellow cable channel Cinemax, and the entirety of its Warner Bros. TV and film library.

As these specifics are only speculation at this point, the market isn't reacting too sharply to them -- AT&T stock is largely trading sideways tonight.

But it thickens the plot of the Streaming Saga currently playing out among big media companies. In a world where Netflix (NFLX -1.12%) has a solid position on the market and Walt Disney (DIS -0.15%) is entering the fray with a relatively low-cost offering, AT&T is coming in relatively late to carve out share.

One advantage it has is its wide and deep library. However, Disney has attractive assets, like its solid slate of animated films, not to mention the complete (so far) Star Wars film saga. Netflix, for its part, has quickly ramped up its set of proprietary films and TV shows. And finally, AT&T's apparent price point is notably higher than both Netflix's and Disney's subscription rates.